Alternate title—Dario is the biggest windbag that you will ever meet.

Dario: Standing on the precipice of entering the Crimson Vault we have one of our biggest challenges to date—finding a babysitter for the child that Malyth kidnapped. We knew that we had quick access to the city of Acworth via the tunnels and so we ventured that way. The cave mouth provided no easy access to Acworth, other than by magical flight, and so it was that Nict took to the air, bouyed by heat waves, and with child in hand to seek a babysitter.

Nict: After we discover how close we are to the entrance to the hiding place of the Crimson Ruby, we decide that it might be a little rough dragging along a child with us so we agree that I should take the child to Acworth to find someone to care for the child & maybe transport her to Silvertree. She's a good sport about being dragged around in my cloak while flying through the sky. She reminds me a little of Sehra at that age.

When we get down to the settlement, I find it to have been demolished. Blood seeps in the ground & there is no sign of anything being alive, but I do spot smoke from the mountain where Old Man Cratchet was supposed to be. I decide that I would investigate. If he seemed shady, I'd take the child with me, but if he was the loyal member of the council that Regent Tolmari says he is, he should be a good person to leave the child with.

I fly up the mountain & it is cold so I wrap my cloak around the child a little tighter. I find the cottage... er, it's actually more of a shack that seems to pass as Old Man Cratchet's home. I knock, but get no response & turn to leave. When I turn, I find that 2 wolves have crept up behind me. I see no reason to fight so I try to take flight, but one is quick enough to knock me on my back & I use burning hands to try to force it away. I look into the creatures eyes & see that if it wanted me dead, I probably would be so I raise my arms & wait. To my surprise the wolf speaks & asks why I am there. After a little name dropping & discussing, the wolf transforms to Old Man Cratchet. Cratchet lets me into his home & I explain how Sliverwind brought the Dario Defenders here. He asks who Dario is, & I'm amazed. Someone not tainted by Tarralon's song on Dario! I tell him who Dario is, & he tells me that I am a fool for following such a man. I agree, but my die of fate has already been cast with the group. He tells me he saw Nyssa has fallen in battle. I lower my head a moment in honor of her sacrifice. He said, he was going to get her body, & I ask if he could care for the little girl. The old man's wolf seems to get along swimmingly with the child, & I think that more than anything else gets him to agree. I give my leave & fly back to the group...

Entering the Vault of the Crimson Ruby

Dario: The entryway to the Crimson Vault was a cold, cold room, with what Tarralon tells us is a magical piano of sorts. I leave it to him to figure it out, and while he has clues, he is uncertain about what to do. I grow bored, so I cut some ice from the wall and throw it down the hallway. I hear squeals of horror. I slowly turn around, shrug, and tell the others, "There are no traps".

Nict: The entryway to the Vault of the Crimson Ruby is, in a word, foreboding. We make our way in & find a room with what looks like a musical instrument made out of ice & integrated into the room... & an open door. Someone has beaten us to the punch. After a little group discussion, we follow that open door... & then I get the feeling we aren't in the same plane...

Dario: As we venture forth it seems that this vault is made up of a maze of subdomains to the gods and goddesses of the world. Eventually our path crosses into the realm of the great Venal and I find a holy relic, the lost icingsmith widget of the ancients. I clutch it and desire to return it to my order. The rest of the Dario Defenders are less than thrilled but follow suit.

Nict: The new plane seems like it's dedicated to the Morgan, Goddess of Storms as it is very... wet. Also, it's odd that there are no people. No worshippers... no life even. We make our way though the storm & find a chapel to get out of this horrible rain. When we enter, I feel the shift in planes again. We enter a very, poorly kept temple that seems to be dedicated to Venal. A shoddy looking artifact seems to be the center-piece for this terrible place. Dario goes to check it out & starts jabbering about what a great find he has made.

As Dario congratulates himself, I hear breathing behind me & turn to see what it is... & I shriek. There is a horrible monstrosity inches from my face. It grabs me, & I throw fire at it. The group notices & attacks it although Dario seems to have a hard time pulling himself from his own revery. We continue to go through planar portals until we find one with a gazebo... 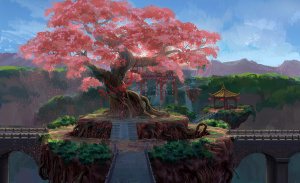 Dario: With the icingsmith widget of the ancients in hand we find a beautiful scene with grisly players. It seems that we were close on the heels of Denal Thon but were too late. We stride across the bridge to find the guardian of the crimson ruby mortally wounded. As she tells us of the robbery the world begins to shake and quake. Someone grabs the dying guardian and we take off.

As the bridge rips asunder Donovan falls into the depths below and with pure instinct I leap after him, casually throwing my rope to Nict who I hope can hold us. As soon as I have Donovan in hand I activate a token, making us as light as feathers so that Nict can pull us to safety.

Nict: We find a serene plane with music seeming to permeate out of the very air & we see a pale elf holding a wound on her chest. We try to heal her & find out what has happened, but all she says is that she failed & our healing spells fail. As she dies the plane starts to fall apart. Dario is slowed by the stupid, dirty artifact but refuses to give it up. In the end, I have to pull Dario, Thad, & Donovan to the portal making sure that they have feather fall on them.

Reincarnated ... as a Dwarf

Dario: We return to Silvertree and immediately upon arrival I head straight for the temple of Venal, to present this most holy of relics. As I release possession to the priestess, it slowly dawns on me that I have been once again enchanted against my will. Tarralon and Nict seek to mock me, but I inform them that this is a good thing. No one has any right to be as perfect as I am, and thus this error helps to show the world my humanity.

Nict: The next portal takes us back to the Library. They are trying to revive Old Man Cratchet, but they need a diamond & orcs had come & stolen all of them in the town. Luckily, Dario had bought one, probably as a gift to Mama Nardozzi. As we give them the diamond, we find out that a lot of time has passed compared to what we felt in the other planes. Silvertree is under siege.

Cratchet reincarnates Silverwind... as a dwarf. That has to be awkward for an attractive elf to become a dwarf. Several of us keep snickers down as it is a dire situation we are in. 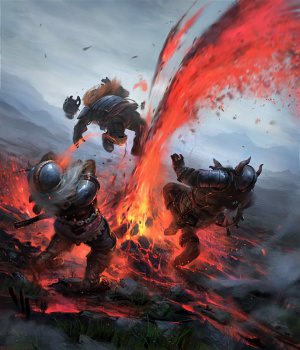 Dario: From the Astrolabe we watch the eye of Sauron and determine that we will spy once nightfall comes. As we wait, and the sun sets, a transformed Denal Thon comes out of the eye. Flying over the crowd, his demonic visage is whipping the orcs into a frenzy.

"We cannot wait. We have to strike now", I say. Spells are cast and potions drank in rapid succession as we form a rough plan. Tarralon will be our runner, get the gem and run like hell for the walls. Thaddeus and Nict are to keep pressure on the foes, each in their own way. Donovan is to kite the field of battle and heal the wounded. All turn invisible except for me. I am the target.

We teleport next to the gem and I call out a challenge to Dinal Thon, compelling him to fight me or feel the wraith of Venal. To everyone's surprise, even my own, he is unable to repel the challenge and he faces me in the field of battle. I don't remember much beyond a blur of blades and magic. I do remember losing the three fingers on my left hand to his blade. That wound is now a much-cherished receipt for me flying my greatsword through the entire length of his body.

Nict: When Dinal Thon comes out of his cocoon of fire, we set up a plan. Invisibility for everyone except Dario who would act as a distraction. I would teleport everyone in. Tarralon grabs the gem & runs for the fort. Away from his power source, we would then have a chance at Dinal Thon.

It goes off well. At one point, I get 2 opponents off of Thaddeus, but they come at me & knock me out. I wake up on the ground in a lava vein & find my potions had exploded on top of me & rejuvenated me, & I re-enter the fray.

It is a long battle, but in the end, we are victorious. Sadly, we lose Silverwind at the end of the battle. She uses her energy to wield the crimson ruby & wipe away the enemy forces...