"But I'm a Professional" 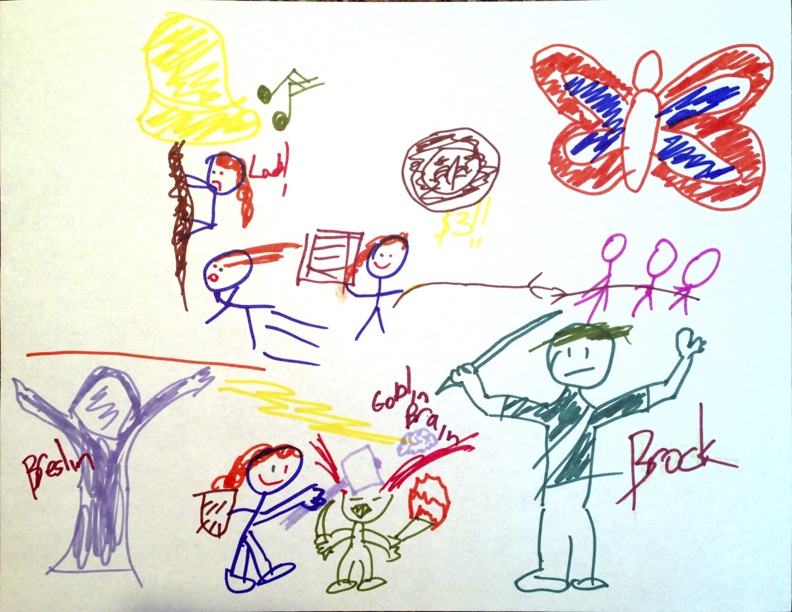 there were contests and I won the tug of rope, well the "MVP" of tug of rope, anyway, but the rope snapped which was cool, but somebody got hurt and there was a little blood, but that was okay. i made drawings for the arts and crafts contest, but they didn't win, and i totally was right about the wooden plate for three gold pieces!
Oh, ohohohoh, but before that, there was a LOT OF TALKING. TALKTALKTALKTALK then butterflies. I caught one. Yay Desna!
I fell off a horse.

Glinvizz
Another year, another festival. I swear, losing my hearing is feeling more and more like a blessing. At least this year looks like things may be taking a turn for the better in Sandpoint.
I'm not usually one for games, but this year does have a feeling of being a little different. My book drive has fallen upon deaf ears (oh, irony), so I guess trying some of the fun that the others were having couldn't hurt.
I'm don't care for physical engagements, but this year there were a few events that are established that caught my fancy. The trivia contest was a nice change of pace. I even won myself a new quill and some sheets of paper. There was also a crafting contest. I quickly penned a story that won 1st place, as per usual. Following the path of most of the masters that participate, I decline my prize and let it go to the next deserving person. I also felt like doing the horsemanship contest. Well, not for myself, but this young mage that reminded me of what I was like in my early youth. I was able to talk the horse into giving him a hand with winning the contest to woo a young lady. Imagine my bewilderment when I saw that man muck everything up and ended up having an intimate encounter with a tree.
There was also some free food and drink, of which I'm not one to shy away from. A lot of people couldn't stomach the hagfish brew, but I found it pretty acceptable. There was also a fine curry; a perfect mix of complex and simple indescribably rolled into one.
Overall, this has been a pretty exhausting day and I can't wait to head to bed.

Isra'a
This festival was a perfect opportunity – everyone’s attention elsewhere. Pay no attention to a fellow festival attendee bumping you as they go past, you won’t notice your purse until later. The constable is out and I know he is? Fantastic… a perfect time to help myself to some trinkets, a fool and their money are soon parted after-all.
Foolishly, I allowed myself to get swept up in the revelries – I am not usually so careless. Maybe I’m going soft, or maybe I just wanted to show off - show off I did. Attention wanted or otherwise, is never good – I know better. Then again, it doesn’t much matter if they know I am coming. It never has.

I know it has not been long since I wrote you last, dear brother, but so much has happened today that I feel I must write you earlier than usual. As you know, today was to be the opening of the new cathedral here in Sandpoint, the culmination of my journey. Of course, the benediction was to be the climax of the Swallowtail Festival here, a charming affair filled with all manner of food, drink, and merriment. There were many contests, and while I held back at first, I soon found myself unable to resist the sport. You would be proud of your little sister, I dare say. I placed second in the strength competition and performed admirably in the trivia contest. I also sampled a new exotic beverage they have named "coffee." I tell you, Hilfred, if you ever chance upon this enchanting concoction, do not pass it up! It is at once intoxicating and invigorating. Alas, the celebration came to an abrupt end.

Goblins in the Streets! 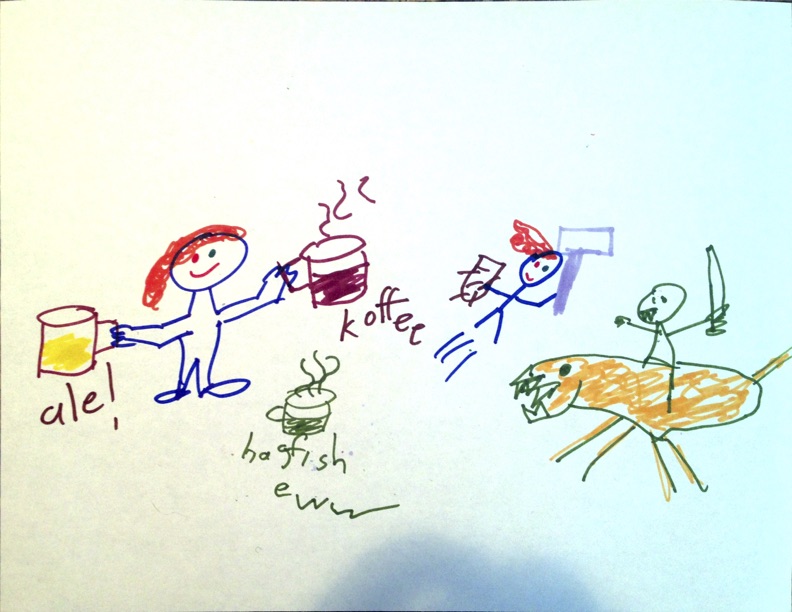 The best part of the festival was when the goblins came. I hit them with hammers and then they made me laugh and I fell down but then I smashed them. And Brock smashed a lot. Like PLOOOOOOOOSH. Everywhere. And Breslin was all BZZZZZZZZZ with lightning, and there were arrows.
Then we ran and saved the really pretty guy from goblins. This guy was hanging out by the open gate, and I think he's probably not a really good guy or anything, but rich people are like that. There are no good rich people. Except maybe the inn-keeper. She's prettier than the guy we saved.
Glinvizz
My bed will have to wait. Everyone is in a panicked state and I can smell a bit of smoke in the distance. It didn't take long for the perpetrators to come out, though; goblins. As I've read, they have an affinity for fire and were using it to their advantage. Most of the people around me seemed like capable fighters, so I left myself to taking care of the fires as much as possible. There was a bit of a scuffle when they got near the church, but I got pretty lucky and was able to hold them back.
Once these goblins were taken care of, I was once again taken by surprise as everyone was rushing toward the gates. Here, we found a goblin on the back of a goblin dog as well as three other goblins with huge swords harassing some noble and his dog. Once all was said and done, we were at least able to save the noble and drive off the goblin on dogback.
Isra'a
How did I end up here, rushing into combat like this? Sure, I have grappled in an alley before and slit a throat or three – but to purposely engage? Madness! Missed, missed again – maybe I need to spend less time card sharping and more time with my steel. These ‘companions’ are proving useful – a medic and a couple of shields, meat or otherwise… perhaps I should keep them around.
Hilma
Hilfred, before any of us knew what was happening, we were surrounded by the infuriating and terrifying chanting of goblins. They raced through the city, carrying torches and attempting to set the whole town ablaze! I tell you, I was so enraged that these thugs sought to disrupt such a happy and holy celebration that I scarcely had time to feel afraid. There was a small band of us gathered in the town square who faced off against a mob of these fierce bandits. Would you believe that they were attempting to burn down the Cathedral? I assure you that we defeated them and the whole town was able to drive them out. Of course, much of the town was damaged or destroyed in the attack. On their way out, we noticed a group of these heathens harassing a nobleman. It struck me as curious that the gates of this town were left open this day, but I had no time to ponder such oversights. I quickly called upon Torag to protect the nobleman and shield him from harm, and the Lord of the Forge obliged. I am pleased to say that he was unharmed and the last of the marauders were driven out or killed.

Glinvizz
This is awful; the library is destroyed. I guess, in the same vein, my house is gone too. At least I have been offered some housing at the Rusty Dragon along with some of the other residents of Sandpoint. I'm not one for adventure, but I really want to get to the bottom of why this happened. Also, I can not abide the destruction of so much literature!
Isra'a
The saving grace in all this non-sense is the saved aristocrat Aldern – he is now indebted to me. Now, how to turn that to my advantage?
Hilma
I do think, dear brother, that this small band thrust together by chance seems to work well together. I already know that I will be seeing them again as the nobleman we saved has offered us some sort of assistance, it would seem, and we are to meet with him tomorrow. We have also been granted lodging by a local hero who, in her retirement, operates a well-appointed inn here, and I am grateful for the support as my previous lodgings were destroyed by the goblins. I hope that the Cathedral dedication won't be delayed too long, but the town must focus on repairs. After the unpleasantness this town has experienced in the past, I have no doubt that they can pull together and rebuild as they have done before. I hope that they will be the stronger for it. I will write to you again soon and let you know how the situation progresses.
Haneet
Everybody's all sad, but like, we're staying at the inn for free, and the inn-keeper is a pretty lady and I'm ready to keep partying. I'm not tired I don't have to g

Before next session's day
1 reroll directly-related to goblins

Late
1 reroll (DEFENSIVE ONLY) directly-related to goblins
Not done