"Skeletons Between Your Toes/Tiggers are Wonderful Things"

The Townsfolk Love us

Karaz
Well it's like I figured. Not much different in this town than any other. At least here folks mostly ignore or overlook me. No one has thrown a single rock! Got a job though, sure it's moving corpses but hey it pays ok and the other guy doing it hasn't tried to kill me yet. Been hanging around a group of adventurers but never know how long it will last. So far they seem ok but no real friendships yet. But they did let me sit with them for meals, their wizard even gave me a magic bath. It's lots better than the cold river and you come our cleaner too! The apartment burned down but I share a room at the Inn for now. It's not in the root cellar either! Can't wait to see what happens next but I'm not getting my hopes up for now. 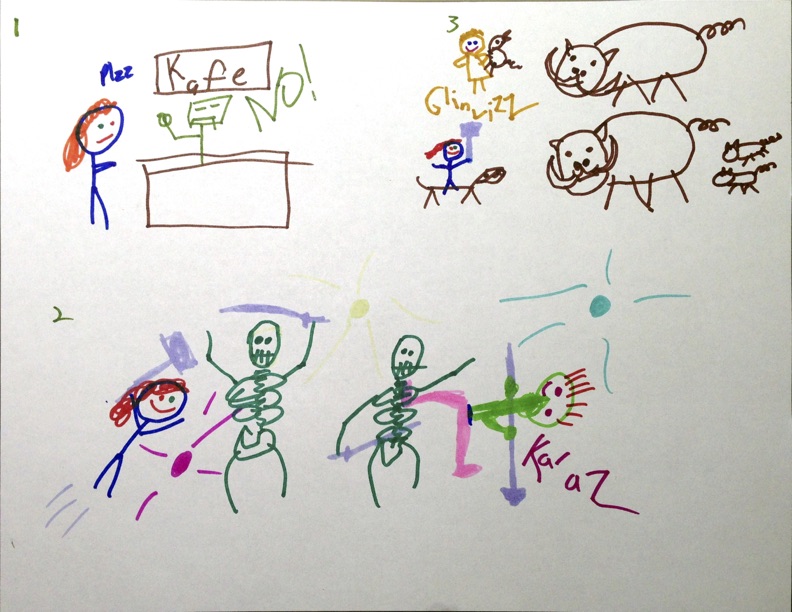 I wanted coffee but the coffeee person was mad and said I couldn't have any so I went around town and I chased a bird into the grass and then bumped into Karaz and Brock and people and they were all worried.

Isra'a
How am I going to pull any jobs? Far too many people know me now. On the upside, I don't have to pay for things - so it hasn't hurt my life style any. I just hope the people here don't travel often, really don't want to be widely known.

The youngest Vander daughter lured me into an interesting position. When her father started nosing around I was able to slip out unseen. Given more time, the position would have been much more interesting... hope I didn't cause the poor thing too much trouble. Not enough to stick around mind you, better her than me.

Glinvizz
Well, my house is in ashes. The worst part is, most of my books got burnt. the only one that was spared was one on naval fireproofing. Despite the depressing nature of this find, I decide to keep the book. ::Sigh:: I sometimes wish I could have the cheerfulness of Haneet.
After recovering my belonging, I stopped back to the inn that Ameiko ran. There was some commotion about skeletons in the graveyard, but I had some trouble picking up the conversation. Her father, Lonjiku, came in not long afterward with an angry look on his face. His accent was thick, so his lips were extremely hard to read. I didn't trust the events what were going on, so Isra'a came with me to tail the old man. Despite his age, he was quite quick. He did not stray from his course to his home, though, so we made our way to the temple coronation.

We awoke to find ourselves to be quite the local celebrities here. I was able to walk the streets of town this morning, surveying the damage and lending a hand where I could. It will take some time to rebuild, but the townsfolk seem to be in decent enough spirits, all things considered. A local bakery even offered me a discount on their wares.

Problems in the Cemetery

Karaz
Someone actually came looking for me at work today! Those adventurers asked me to help with some trouble at the cemetery. I was surprised to be asked, maybe we will become friends after all! The problem was a few skinny guys. I mean really skinny, no skin, no muscle, terrible. They were aggressive fellows, but a few well placed feet took care of things. Got a little dusty but I was ok. Glad I came. They actually let me help! The townsfolk thanked everyone but me, but that's nothing new. Maybe I have a place here after all. We found some salvageable gear too, and I am probably going to get a share! Maybe I can get a new apartment. If I can avoid people a bit maybe they'll put up with me longer.

Isra'a
Out of the frying pan and into the fire... Perhaps it would have been wiser taking my knocks from ol' Vinder. The group pulled me along to some issues in the cemetery - skeletons... animated skeletons. I daresay, my razor sharp wit would have been more effective against them than my razor sharp sword. Note to self... get a mace of some kind - the ugly one's kicking seemed quite effective.

Glinvizz
The rest of the town defenders gathered near the cemetery. There was some concern with shady figures milling about in the middle of the graveyard. When we approached them, it quickly became apparent that they were skeletons. There was little for me to do in this combat, so I stayed back and kept my eye on the situation, trying to keep everyone up and mobilized. Though, when some archers came out of a nearby crypt, I saw I had to make my way over there to draw their fire. It didn't take long to mop up the undead. We got to do some investigation and saw that the crypts were raided, including the one of one of the revered old priest. This is something we need to do some more research about.

Hilma
As I was leaving the bakery, I ran into several companions. It seemed there was a commotion at the cemetery. When we arrived, it became obvious quite quickly that we were dealing with an evil an unnatural force. Some vile spellcaster had summoned a group of skeletons. While the town sheriff was busy fumbling with the gate, my companions and I were able to defeat these monsters. One of my gnomish compatriots was able to obtain (from a rat no less) a crude description of the necromancer. We found a robe that belonged to him and discovered that he had desecrated and ransacked the final resting place of the last holy leader of the temple here. I fear that I will need to better equip myself if we are to be facing more unholy servants of this mysterious ne'er do well. We tried to discover who he might be, but without much information to go on our search proved fruitless.

Haneet
There were skeletons in the cemetery and Karaz was all stabby stabb and they were all, "We're fucking skeletons, we don't fucking care." So I hit them with my hammer. Then Karaz did a dance where he kicked the skeletons. I turned on my lights so the fight was more awesome.
Oh, and, like… somebody let them out? With a cloak? There's a bad guy in town. Maybe two?

Karaz
We got invited to go boar hunting! Well that adventuring group got hired to protect some rich guy who was going, but they let me tag along! I might even get paid for going. I almost died out there! Gotta toughen up some! The old man would never have fallen like that! The cleric healed me, didn't ask me to be a sacrifice or anything! This just keeps getting better and better! Better not tell her we are from the same hometown. That seems to make other dwarves pretty mad. Not getting my hopes up, but they haven't tied me to a tree and run off or left me where I fell. That's a good sign right? I have decided to help them as long as they will let me. It'd be nice if it was a long time. I can't wait to see what happens next!

Isra'a
A jaunt out to Tickwood with Foxglove could have been a more civilized activity. Unfortunately, it was not. Foxglove seemed enamored with the dwarf woman/man, I never can tell with them. I swear, if I have to hear 'no trouble at all' one more time... of course it was trouble - don't down play my actions. I expect to be paid for my services. Just because something is the right thing, doesn't mean that warm feeling is a suitable reward. I guess I must speak up more often if I am going to get my cut.
To top it all off - I was run thru by the boar... I need to be far more cautious in the future.

Glinvizz
Aldern Foxgloves made another appearance, asking us to go boar hunting with him. This is not to my taste, but there was a chance that we would run into some goblins and there are some questions that I need answered.
Unfortunately, not a goblin was to be found. There were some boars, though, which quickly taught us we know nothing about boar hunting. I decided to sit back and look out for a goblin ambush. Once there was certainty that there would be no ambush, I decided to try to split up the boars by using a ghost sound of a pig squealing. It's been a long time since I heard one, so I wasn't surprised that that it didn't work.
Once the fight was over, I found a shoat in the bushes. I used my ability to speak with animals to reassure the youngling that it would be alright and that it should come with us. I remember having a pet in my youth, and this little guy and probably give me and the rest of the group some comfort. Also, trouble seems to be following us everywhere we go, so grooming a more war-worthy mount may be prudent in the future.

Hilma
The nobleman I wrote you of earlier, Aldern Foxglove, seems to have taken a...less than platonic interest in me. I find it strange and unsettling. He asked me (and my companions) to accompany him and protect him on a boar hunt. Seeing how he handled himself against the goblins the other day, I feared for his well-being, and we obliged him. The boars proved to be more of a challenge than the skeletons, if you can believe it. The cramped quarters of the forest hindered our movement and the boars put up quite the fight. We were successful, however, and Foxglove seemed well enough pleased.

Haneet
MY PUPPY WAS NAMED STEVE. He likes eating cat poops, and his favorite color is a sort of greyish grey. He did *not* like going hunting for boars. I used my hammer on them. I don't think you're supposed to use hammers for boar hunting, but I like hammers. ALSO I JUST DISCOVERED HOW TO MAKE ALL THE LETTERS BIG. Glinvizz has a pet boar now. I think it should be named Steve. No! Bob! No! Bucky, Jr! He has buck tooths, so it makes sense!

Before next session's day
Favored Enemy (Undead) or Favored Enemy (Animal) for 1 day. No action to activate. Stacks with existing. Choose which upon use.
PRD for FE

Late
As above, but for 1 minute/level.
Not done