The Quarterstaff Strikes Back

Isra'a
We received an over view of the goblin political structure in the area... if you can even call it that. To be brutally honest, I couldn't care less about those biting little runts. Shaelu and Hemlock are going to see what they can find out - I feel bad for Shaelu... she shouldn't have to go out alone. On the list of unlikely things to happen - I was made a deputy. Seriously? Now ask around, I have never broken the law - but that certainly doesn't mean I wish to enforce it.

Karaz
Got a summons from Balor today. No one ever willingly wants to see me! He talked a lot about goblin politics. Never been good at politics, mostly just want to stay out if sight and hope the authorities don't run me out of town. I got another job! I am lead deputy in charge while Balor goes away!? Why am I in charge? I am no one's 1st choice for a charismatic leader. I will do my best though. A good chance to help others. Plus killing a deputy is a big crime. Maybe people will be nicer?

Glinvizz
We finally made some headway in finding out more about the goblin attacks. There are 5 tribes in the area and it looks like they are working together due to some outside force and the influence of the "goblin heroes." Desperate for answered, Balor and Shaelu are going to the nearest goblin outpost to try and negotiate some terms and find out more.
Honestly, I blame the slanty-eyed, pointy-eared one that has been running around the village and been causing havoc. No one knows who it is, but I have the sneaking suspicion that it has to do with the Kaijitsu family.
As Balor would be leaving and the town would need someone to control the law, he decided, in all his infinite wisdom, to put us in charge. Now, I understand Hilma, Calum, and myself. The others, though... they remind me too much of adventurers. Heavens forbid that were to ever happen to me.

Monster in the Closet

DM Daviren Hosk (a ranger) of the Goblin Squash Stables is the one who helped you assess Jerky, and only under duress, that he hopes learning about a goblin dog will help him better to kill goblins.
Jerkey does have the usual Goblin Dog Allergy ability, but if you keep him coated with lotions (part of upkeep), it will only apply to his bites and not touching.

Isra'a
For a town of this size, there sure seem to be a myriad of problems. A goblin had managed to get himself separated from the raid a few days ago and ended up hiding out in one of the homes. To make matters worse - the child who lives there was taken hostage. Our group decided to try to negotiate with the goblin - I waited to see how that went for, oh about 10 seconds. Negotiate with a goblin? Not today. I scaled the window and was able to pull the boy out of danger before things could go south... well they did go south. By south I mean down - upon pulling the child out thru the window I lost my footing and fell.
The child was fine, too bad we couldn't say the same for the boy's father... The goblin was dispatched without incident. Now our gnomes have taken in 'Jerky' a rat looking goblin dog... I'm with Davirin on this - I don't trust that thing.

Karaz
First case as deputy was a hostage crisis! I am not much of a tactician, so I just told the others the priorities. Don't burn the house down and save the child. After that do the best you can. The Oracle and the cleric thought negotiations might work. The rogue just went up the wall and pulled out the hostage. I went in to see what I could do, but the goblin was not very willing to be reasonable. I had to put him down. His dog was trapped in the closet. The adventurers decided to keep the dog. They are building quite a collection of animals. I guess some people can keep pets. I never could. Like people, animals tend to not like me. Oh well. Wonder what else is coming. The life of a deputy hmm?

Glinvizz
It wasn't long before we were called to duty. I was informed that there was a hostage situation, so of course I felt the best situation was some tact and negotiations. Now, my goblin may not be perfect, but I have been working on it enough to most likely get us by. The most difficult part is stretching out your mouth to be able to match a goblin maw.
I pretty soon saw the flaw in the plan in that I couldn't hear what the goblin was saying upstairs. Hilma told me that it sounded agitated. Goblins are always agitated, though, so I wasn't escalating the situation at least. When I got up the steps, though, I soon saw that negotiations were not going to be an option. Isra'a took the child out a little early and that caused the goblin to go on a stabbing spree.
The goblin was met with a quick demise, though all of our fonts of information were not gone. There was a trapped and injured goblin dog stuck in the boy's closet. I was able to free the dog and got its cooperation. It informed us of the general location of one of the goblin villages. Also, the goblin dog, which we now know as Jerky, took a liking to Hannet; they both like shirking their duties to go off and chase butterflies.

Isra'a
All I wanted was a nice relaxing breakfast but some fool guard, Yosef I think was his name, went and got himself killed. Breslin and I found the body at the bottom of a cliff on the road to the manors. If nothing else - watching my half brother struggle down and back up the cliff face was worth cutting breakfast short. ... He really is quite bad at these things.
Now we have to investigate what happened to the guard and a kidnapping to boot. Speaking of boots, have I mentioned how much I hate licking them? I know my way around high society but I prefer to be in disguise, on equal standing with them. For suffering the elder Kaijitsu - I will have to visit his estate one night...

Karaz
OK there are some serious crimes here! First a hostage crisis, then a kidnapping, and a murdered guard! I want to help but I am no ranger. Luckily the cleric found some tracks. But they ran out. The nobles were not much help either. Most seemed to want me to talk. Me and diplomacy is never a good idea. The others helped me. Does that mean they care? Or are they looking to get something? Or are they hoping to do a good job and get paid better?

Glinvizz
If it isn't one thing, it's another. I was about to get some research done (and of note, this is something that has sorely been missing from my life as of late) when there was another call that a bridge guard met with his demise. First under the assumption that he just fell, some forensics revealed that he was actually pummeled. From knowing the townsfolk and the constant rumor mill that run about this small town, there are few that could have delivered such a beating. Once again, all fingers pointed toward the Kaijitsu family.
Scouting the estates nearby gave us little information. As we were about to try desperately to re-find the tracks, there was a flare from inside town. A note was left behind that revealed Ameiko has a brother and they were to meet at the glassworks. She never returned from this meeting, so it looks like we finally have a solid lead.

Isra'a
Who needs a scout when you have gnomes! So much for the element of surprise. Hopefully, I am allowed to do my thing in the future... I don't really want to end up dead. Anyway, more goblins... yay. They really are sick little things - we were able to deal with the goblins. I dare say, we are getting rather good at it too.
Who did we find working with the goblins here? Ameiko's brother, Tsuto. Now what would a well heeled person such as this be doing working with goblins? I fear we will come to find this out all too soon. As an aside - Tsuto's cloak looks rather splendid on me.

Karaz
We found out our landlord was missing too! How many people can disappear in a day? A letter took us to the glassworks. It was hot, loud, and full of goblins! The Wizard turned me into a giant! I had no idea he could do that! It was kind of neat but did he do it just to have someone to hide behind? Oh well it worked! Beat the goblins! Then a monk showed up. The wizard tried shooting him and throwing a stick at him. Both times he caught them and sent them back! Neat trick but I bet it hurt! We finally got him and saved the baby but the glassworks is a mess. Hope I don't have to clean it up!

Glinvizz
When we reach the glassworks it becomes apparent to us that it was much more massive than we remember. After a little debate, we decided to go through the back door. Unfortunately, the door was trapped; a large shower of glass peppered us and caused quite a commotion (I assume). At this point, it was useless to look for further traps as I'm sure that caused a high alert throughout the building.
We made our way into the main glassworks to see that goblins have further snuck into town and have taken over the glassworks. The workers had molten glass poured over them, visages of pain still visable through the the smoky surfaces. The group sprung into action, and I even got into the thick of things, despite my better judgement. Once the majority of the goblins were taken care of, I thought it was best to retreat to the back of the party to heal everyone up as needed.
I didn't got to do much healing, though, as the squinty-eyed, long-eared guy was in the room behind us. At first I didn't notice, but he has the kidnapped baby strapped to his back. I get ready to pull out a spell to gently remove the baby when the plan quickly dissolves as the man throws the baby in the air. Most of us scramble for the baby as Isra'a and Karaz try and prevent his escape. He is taken down by a swift hit from Isra'a and is past the point of no return. I'll have to take some time to find someone that can talk with his spirit. I need some answers... 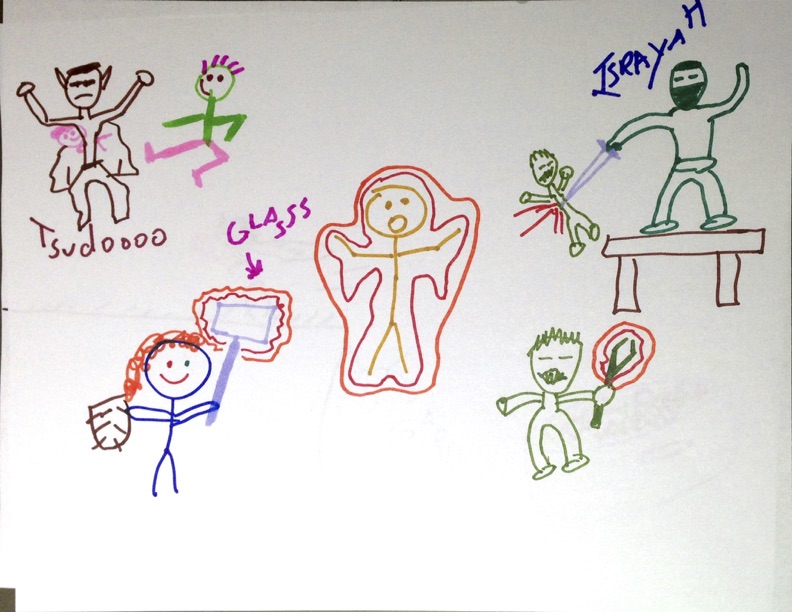 So, like, stuff happened, but I wasn't really paying attention. Then we fought goblins, and one of the triplets of evil dudes. Like, there was the one evil dude who opened the gates, the one evil dude who kidnapped a baby and killed the guard, and this other evil dude, who booby-trapped the glassworks.
He's dead now. I poked him with my shield.

DM
I was going to do some information unloading online and skip a small section (part 2). I instead will continue to do it during the game, but briskly. It's too plot-important to take online.
Glinvizz
I want to try to find someone to cast Speak With Dead on Tsuto.
Breslin
Collects his commissioned Want of Magic Missile

Before next session's day
Madame Mvashti will brew you a tea that will effectively be Divination, once, with a 10 minute "brewing" time.

Late
As above, but Augury.