Battle at the Oasis 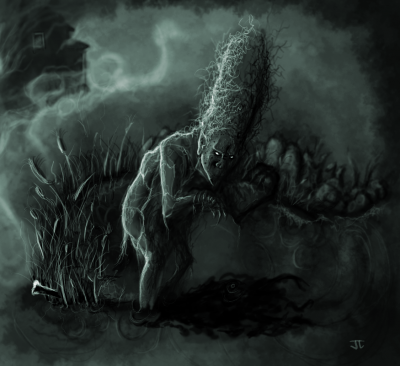 Fuelwen: My memories of the battle aren't as clear as I'd like. Ethel, now captured in the dagger, had a hold on my mind. At her command, I dove into the oasis only to be confronted by the Hag. Her gaze shook me, her magic drained my strength. I found myself unable to focus or fight.

At her side, the Hag had control of Rake, enslaved to her bidding, and a set of summoned hawks. A pitched battle ensued. Each of us used every ability we had at hand. Bo's guard dog was nearly killed and Rake had Brilla at his mercy when finally, Nathaniel (who wasn't much put out by being under water) and Bo finished the Hag off.

Freed, Rake introduced himself, and we set about collecting the Hag's treasure and returning to the inn. During that time, he explained the Hag's activities: she had constructed this elaborate trap to bring food to her. He was compelled into her service as her butcher. The bwarves were her henchmen.

I am quite glad we killed this Hag. She was a toothless coward that could not face her prey on equal terms. More than that, she was weak: even with everything tilted to her advantage, she still couldn't capture her prey. A pathetic specimen.

Fuelwen: The problem, at this point, was that we were in an inn nearly devoid of supplies, injured and drained, with no clue how to get home. Our only clues were the Hag's notes, the most important of which were written in Elven and in code. As the only member of the party that could read Elf, I had to try to make sense of her notes, despite my dazed state. The other notes contained information about how the Hag located this pocket plane, and information about her other coven members.

It took nearly an entire day, which was also enough time for me to free myself from Ethel's influence. This meant that I could reveal her existence, and I did so when I had finally completed translating the Hag's notes.

The key to getting home was a special potion- applied to the doorknob, it would cause the tavern to return to Great Fortress. But not one of us had any ability to brew a potion. Ethel, on the other hand, was a talented artificer, and her room was equipped with everything we could need. With her guidance and several misteps, we managed to brew the potion. It was clumsy, but we got home.

I find it rather odd that a barmaid would have so complete a laboratory.

Ethel wasn't willing to do this for free, however. She made us promise to work to have her returned to human form. A promise I gave freely at the time.

Fuelwen: Of course, the tavern's absence had been noted. The local authorities were upon us in a flash, implicating us for the series of murders that had taken place there. We were placed under arrest and confined to the tavern, which was a good step up from jail, at any rate.

The charges were eventually dropped- we had evidence aplenty to demonstrate our innocence. But while the investigation dragged on, we had several days confined in the tavern to recover, and get a feel for our new companions. The most notable thing that transpired during this period was a brief interrogation of Ethel. She revealed that she had been in league with the hag, and that she had profited from helping to bait the Hag's trap. Bo is unconvinced by her story, and while I'm unsure, her story is weak, and I'd much rather trust Bo than Ethel. There are many other elements that don't add up.

At this point, I've reconsidered my earlier promise to Ethel- and without more information, I find it unlikely that I will work that hard to free her from the dagger. I haven't discussed this with the party, but I'm certain they will agree.

Free to go... where we tell you

Fuelwen:After the charges were dropped, the police returned to lay out a deal: as the finders of the will, it was our duty to bring it to Lull and to One Thumb's heir. Local custom promises a finders fee for this act. The others were eager, I... less so. This side trip doesn't bring me any closer to meeting Sekolah on the high seas. But, I found myself given an offer I couldn't refuse: the authorities had already booked our passage, and wasting city resources is a crime. It was either take the short trip to Lull or wait 5 days in jail.

Of course, 5 hours cooped up in a sailing ship is worse than any jail. I'll never understand why the land dwellers can't find some more... sane way to travel across the seas.

Fuelwen: This leaves some lingering questions: