In which Rake is not responsible for having plot run awry 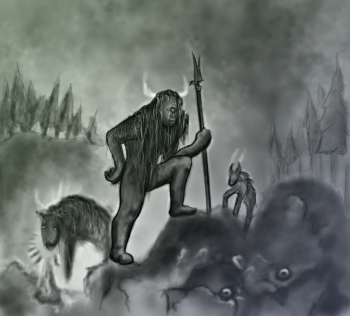 Nathaniel: We were given the evening and night to rest before we set off in the morning to investigate the unexplored plateau, so I decided to seize an opportunity that usually slips through my fingers. I convinced the pureblood dwarf to accompany me to an empty dwelling so that I might hear his stories. Unknown to him, it would be his final telling. Sadly, his newlywed wife wished to come along and this complicated matters.

Leaving the wife in a living room, the dwarf and I went into another room so that I may listen to his stories. After exhausting his major stories I could resist myself no longer. I drew out the hag's eye, telling him that it would aid in recording the stories and that he shouldn't resist. Despite being suspicious, he yeilded and his body paralyized. After my first stab with Ethyl didn't kill him as swiftly as it should, I requested that she become Dwarf-bane and presently ended the dwarf's life.

As the body hit the floor a panic came over me and I began summoning a bugbear skeleton to prevent the wife from leaving—ever. Covered in blood with two dead dwarven bodies my panic rose. I sent the skeleton out into the night, yelling that I had lost control of it. The dwarves were ineffective against it and I hid my smile. Rake answered my call and was able to put it down.

Flustered, I attempted to deceive Rake about what was going on but he was particularly keen this evening. Most likely having something to do with not being permitted into the bar. Eventually Rake agreed to help me sculpt the crime scene to appear as though the skeleton had done it.

All out work was in vain. My panic continued to dog me, causing me to stutter and flounder with words and the dwarves were not convinced of my mock innocence. I was incarcerated.

Rake: I came to Nathaniel's aid. Got lied to by Nathaniel, then had group ask what did I do now. Rake is innocent here, stupid dwarves to blame. Nathaniel to blame. All Rake try to do is help Nathaniel. Stupid dwarves!

Fuelwen: As it turns out, Nathaniel wanted to kill a pure-blooded dwarf we encountered to sacrifice to his ring. And was incredibly incompetent at it. It would have been a simple matter to abduct the dwarf, drag it out into the wilds, and hunt it. Sekolah knows that it would have, at least, been more entertaining. Now Nathaniel rots in jail for his crime.

Shaking hands with the one-eyed monster

Nathaniel: After being told by the ollum Advic that the last exploration party did not return, Brilla found it easy to convince her to allow me to go on the journey. Climbing up the cliff face was exhilarating, as I haven't had a climb that long in several generations. Once at the top we discovered a rogue inbred sheep and Fuelwen put it to death for being weak. We continued to encounter inbred sheep, finding the shepherd near an ancient ruin.

Beyond a makeshift wall towered a single-eyed humanoid, a cyclops. He was slow to speak but gradually his grasp on language returned enough to make conversation possible. He shared with us that he was thousands of years old, making me feel young.

In his youth he traveled to this island with human worshipers of Celestian, who built the temple whose ruins we were walking on. The only part of the temple that remains erect is a gateway bearing symbols of constellations. Through the stories that Big told us, we were able to determine that the gateway functioned during the new moon.

Waiting for the new moon only took a few days and we found that the portal was indeed active. I stepped through first.

Fuelwen: Fascinating. It's the only term I can use to describe it. While Big is soft-headed, I can't help but feel some warmth for him. My emotions my be clouded though- I'm closer to my goal than I ever have been before. This area was the remains of a temple of Celestian, and a gateway remained.

But that's not all. Big, the cyclops, has been here for a very long time. Long enough to know that the ocean was much deeper here once. The plateau was not always a plateau- it was once a beach. The local geologists confirmed that yes- the lower portions of the island was once under water. Big implied that the phenomenon was not limited to this island- were the oceans once deeper? My people still have stories about the growth of Gnala from undersea to giant mountain. Perhaps Wild Tentacles had a similar growth?

Fuelwen: Anyway, through the portal. We found ourselves on a small sphere suspended over a large blue orb. The stars were closer than ever, and the sphere was made of star-metal. Fascinating. I can only think that the blue may have been the broad oceans of our world.

In any case, there were undead in the service of Celestian here. We made them completely dead. The entire process was a bit rushed, since there was no air here. But not so rushed that we could not search the sphere.

Star-metal was collected. But much more important- there was a map drawn on the surface of the sphere itself. I think it a map. Ley lines were drawn out, there were clear correspondences to constellations. Brilla memorized the patterns for me, and I'll have her sketch them out as we travel. I'm still a novice with magical matters, but I hope that this map corresponds to our world; that if I follow the real world's ley lines, I may track down the places where constellations correspond to real-world locations.

Still, I'm heartened by the fact that my paranoia was unfounded. The dream-plane did drop us off someplace where I could move forward on my quest. Perhaps it, or perhaps our dreaming, lacked the power to move us further.

Goodbye, and don't let the town burn down on your way out

Fuelwen: While I can admit some fondness for Big, enough so that I was willing to conceal his presence, I understand the racial enmity. Rake, on the other hand, does not. The Dwarves are planning a campaign against Big, when their fighting forces arrive. Rake ran around, unattended, and nearly missed the boat while trying to burn the town down. He vows to return.

Of course, the local Dwarves are expecting the vessel we ride upon to carry their fighting forces back to them. Knowing our fortunes, I hardly expect to arrive at Drn'n Tag, or whatever the island is. If we had sailing men amongst our party, I would be tempted to hijack this vessel- but this large ship requires more crew than Seawolves' Folly.