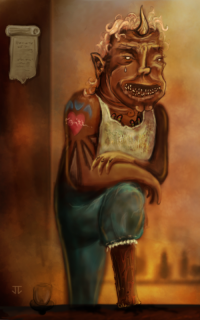 Fuelwen: We left Drnn Tg on the Qn Ltfh, with our vowels tightly packed in our gear. The cruise was relaxing, in the sense that nothing attacked us on the high seas. I had to be subtle about jumping on and off the boat, but one advantage of large Dwarven vessels is that they don't rock nearly as much. It's almost like being on the ground. I spent most of my evenings in the water, hunting fish for sale- it's a pittance, perhaps, but it was better than lounging in some tourist trap.

Nathaniel: I spent my time aboard the vessel disguised as a chameleon dwarf and spent as much time out of the direct sunlight as I could. By the end of our journey I had collected many stories from the passengers, and my companions were very well rested.

Brilla: I was very surprised in the comfort that the Qn Ltfh provided. The ship was a very smooth ride that stopped at a new port every night. Some of them were very charming.

The best part of the trip was that we did not encounter an combat during the trip. I did my best during the trip to draw out each of my ancestors so that they could enjoy the trip as well. Amon left me with a feeling of unease, though. Perhaps I am being to lax in my personal quest.

Rake: I was told I couldn't do anything. So I drank and sang with the crew everynight. I showed them a new sport that they emjoyed with lots of beer. Dwarf tossing. During the day I had one of the group constantly telling me no. Don't like no.

Fuelwen: We arrived in Great Fortress without event. Seawolves' Folly remained in port. The Pink Priaprism remained on the island. Nothing had burned down, or was stolen. Once off the boat, we went around the island, checking on the status of our holdings. I went straight to the Pink Priaprism.

While in disarray, I feel that the tavern is in good hands, in general. Considering the sudden departure, I cannot fault One Horn any of his business decisions.

Killibron lurked in the tavern. Despite my initial unease with him, I don't sense any guile in him. After the party shared with him the tale of our trip to Wild Tentacles, I showed him the drawings of the sphere we traveled to- a sphere Killibron identified as the Moon, based on those drawings. I decided to take a chance, and revealed to him the location of Wild Tentacles, and how to find Big on the plateau. If he moves quickly, he may be able to arrive before Big is killed, and then he may be able to confirm that Big is Ligand, a creature featuring prominently in Celestial legends.

Nathaniel: Arriving on Great Fortress we produced our paperwork and were fast tracked onto the island. We saw Horace, the watch captain who had arrested us on suspicion of murder charges when we had originally arrived back with our teleporting tavern.

Bo and Brilla were eager to evaluate the status of the Seawolves' Folly while Rake, Fuelwen, and myself headed over to the tavern. In front of the door was a huge man who demanded coin—a single copper—for entry, despite our explanation that Fuelwen was the tavern owner. To avoid the fight that Rake was anxious for I paid the entry fee knowing that Fuelwen would refund it.

Inside we were informed by Annabelle, a halfling/gnome, that One Horn had been put in jail for there being an accidental death in the not-legally-sanctioned battle pits. Soon Brilla rejoined us and we discovered Killabron in a corner, enjoying some ale.

Our discussion of portals with Killabron yielded an excellent story about Ligind, the first cyclops who was recruited by Celestians to build a temple in their god's honor. Judging by our stories it would seem that Big may be Ligind.

Brilla: When we arrived at port I felt the most prudent move was to check on the status of our ship. Luckily it was still in port and was being watched by Deenar. I must have startled him as he came up to deck hastily wrapped in a towel.

We were inform that he dismissed the crew as we disappeared without word. This is understandable as it has been a month since we were at port.

Bo decided to check below deck to further check the state of the ship. A good bit of time passed while I was debriefed by Deenar without seeing Bo return. Eventually a woman did emerge from below deck. She had a slightly pale pallor and was dressed like a lady of the night.

My mind was a fit with imagery that it did not want. I quickly took my leave of the ship, leaving the clean-up for Bo and Deenar. All I know is that after all of this I needed a drink, and where better than the Pink Priapism.

I arrived to see a face I did not expect (or want to see) for a long time; Killabron. He believes that our group is some sort of beacon for inter-dimensional travel. I can't really disagree with that.

We shared some stories and a drink or two. Through conversation we found that Big may be a lot more important than we first thought him to be. There are stories of a cyclops named Ligind that was tapped by the Celestians to build the first temple to their god. I feel like we should do something to help try to save him before the dwarves get to him. It may be crucial to Fuelwen's quest.

Rake Finally was left alone. Got to hear about some god that has to steal swords and weapons from other gods. Of course I let it be known that Bloodstorm was a tougher god. Which led to me fighting in the arena at Fuelwen's bar against two men that were powered up by magic. I still beat them and showed that Bloodstorm was tougher. So they agreed that their sword god would help bloodstorm destroy a Heirenous. Supposedly he is the brother of my god, a bad brother. He is supposed to protect god people but, he is not very good at it.

Nathaniel: Fuelwen, Brilla, and myself go to the courthouse/jail so that we may visit with One-Horn and apply for the appropriate battle pit paperwork. Fuelwen allows One-Horn to keep his back pay and we have to wait until the next day to apply for paperwork.

On the morrow we find that Domingo, the pure-blooded lawyer, tending the desk. We pay our 10gp fee and the paperwork is secured.

Note: The city also takes a 10% cut of all revenue due to the dangerous combat.

Fuelwen: With the tavern set up, I make arrangements with Bo and Ethyl to prepare the salve, and instruct One-Horn in its use. He has enough for one trip- one trip that will ensure that no one will find an unfortunate body in the facility again, and without violating any laws (since they'll be outside of the city, when it happens).

Brilla: It seems that One-Horn found himself in jail. Evidently the island requires a permit for fighting that also tithes 10% of the gains to the island. This seems reasonable at the initial cost of 10 gold, especially when you compare it to the island of permits, Single Stone. He only had a day left before being released, so we just let him serve the rest of his time.

Evidently he also made himself out to be the owner of the club, which is what landed him here to being with. This also came with an unauthorized increase in pay. Fuelwen agreed with this with surprising ease, though only for tue duration that he is gone and contingent on when he leaves without giving notice.

After leaving the jail there were signs posted around the port area promoting a fight that promised the power of the Bloodstorm. I want to have no part of this...

Rake: Found a special spot for making signs in book hall. They helped with spelling and the other children actually helped me put up the signs and spray them so they looked covered in blood. Kids are good. I put signs up so all could see Bloodstorm rules.

Brilla: De Dung came to the inn looking for Bo. Evidently there is trouble back home with Bo and it is urgent that we make out way there. It is fortunate that it is only two days out of the way with the shipment of down that we have to deliver.

Rake: Bo has family looking for him. I get to play with Ko on ship with lots of feathers which are fun to dive into. Feathers seem to escape and get smaller everyday. Ko looks funny with feathers on his head.

Bo: Factor for Uncle Bob named Zi Zung brought me troubling news about my family. Seems they have declared support for a seperatist faction. Hopefully they have not become too entwined with whatever is occuring on Garl. Will know more when I arrive near imperial trade lanes.

Fuelwen: Both Nathaniel and I have already called heavily on the party for aid; I pulled them to DrnTg and to the moon, apparently. Nathaniel was at our mercy to help him escape the ultimate punishments for his crime. Now, it seems, Bo needs our aid. We are a strange school, but we hunt together.