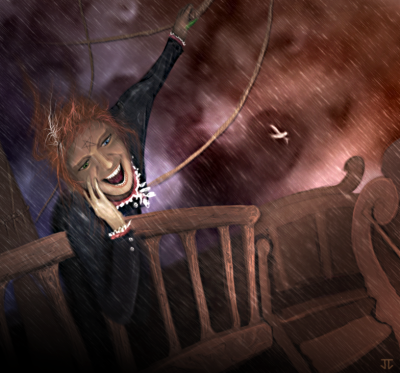 Fuelwen: We left Great Fortress with a green crew. The first day at sea, I began the task of drilling the party. It is vital that we learn better to operate as a unit. I sense that our challenges will only get larger and more complex as time passes.

We delivered the down to No Man, and had some time to explore the island, while we resupplied for the much longer voyage to Tepu. I presented my findings to the local temple of Celestian, and once again, they were very interested, but could do nothing to help me. They will perform research, and attempt to get word to their priests in the Fan empire.

Nathaniel: Our voyage to No Man was an easy one, with Rake enjoying his boyish passion of jumping into giant piles of feathers with Ko at his side. Despite the ease with which he relies on violence he is in all other regards a child.

It was my assignment to "babysit" Rake while on No Man. The island was one of the few that I have been to that does not have a religious caste, or even a dominant faith. Listening to stories, the origin of the name "No Man" comes from the island originally having no native humanoid species. The lack of humanoids coincides with a lack of arable land on the island, which is forced to import or magically produce it's sustenance.

Nathaniel: Rake and I briefly parted ways, giving him enough time to find a wrong to attempt to set right. Apparently a small boy's mother was murdered by the father, who wanted nothing to do with either of them. Rake asked if I could animate the mother to protect the child and I told him yes. I sought out the proper spell and material components.

While I work to cast the spell to animate the mother, Rake and Fuelwen have the father tied up and attempt to convince the boy to kill him as a rite of passage into adulthood. The boy refuses—Ethyl talked him out of it—and the father is tossed into the wet and drowns. Desiring a matched set, I retrieved the body and placed it into the bag of holding for animation later.

DM: And rake never asked him his name, his mommy's nor daddy's.

Fuelwen: This voyage required us to make a crossing through the wild seas. While I could have easily weathered the storm alone, as part of a group, we had added challenges, like protecting the boat. We did what we could, but a wild storm blew up, and did serious damage to the ship. Everything aged and weathered in moments.

This left us all but adrift at sea. And not long after, a Dragon Turtle appeared on the horizon. We had, so far, been unnoticed by it, and ordered the crew to be silent. One of them wanted to know why. I foolishly assumed that he had some kind of sense, and told him. This precipitated a panic among the crew, and drew the attention of the dragon. Furious, I approached the turtle and asked what it would take for it to not destroy our ship- it wanted a snack, and to know the location of the psionic orca we had battled on the trip to DrnTg. These were both easy to provide: the crewman that initiated the panic went overboard, and we pointed the dragon in the proper direction.

We sailed, crippled, for a few days, before a ship from the Fan Empire found us, and towed us the remaining distance to Tepu.

Nathaniel: The dragon turtle was majestic to behold. Like a moving island it sailed towards us. There was nothing we could do but attempt to negotiate with it. One of the crewmen was sacrificed to it, screaming as he was hurled overboard. The sound was not unpleasant.

To remind us how insignificant we were to it, the dragon turtle loosed it's bowels on the side of the ship. This offended everyone, save me, and I decided to investigate if anything useful resided inside the excrement. As I rummaged I discovered many bones but nothing that I could work with. I also discovered a collection of pearls, just the right size to use for my future work. Considering that my craft would benefit our group with additional guardians, I spoke not of them so that my creations will be a surprise.

Nathaniel: On our arrival on Tepu, we were each given the island's passport papers and checked for disease. Bo's family has been caught up in political intrigue and he wishes to help them. Fuelwen purchased whores for the crew, giving them the carrot after having displayed what the stick (sacrificing a crewman) looked like.