Scream from inside the Emperor's Summer Home 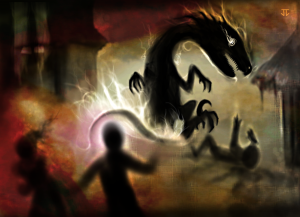 Nathaniel: While entering the Emperor's Summer Home, Brilla and I heard an ear piercing scream from inside the building. Not knowing if this was a common custom in the Fan empire we continued our walk across the bridge and inquired with the guard. On his face was the desire to rush and help, but his call to duty prevented him from doing so.

At the source of the scream, Brilla and I discovered a pregnant woman, So Seun, who told us that her many children scattered at the sight of a dinosaur capturing one of her sons, So Ho Ni. We began to roam the Summer Home, maintaining our disguises as flamebearers, searching for signs of the missing child.

We found most of the children in a courtyard, distraught but healthy. They knew the direction that their brother had been taken, and we headed off in pursuit, telling the children to stay put. As we climbed the stairs we heard a growling sound above us and as we crested the stairs we saw a moderately-sized dinosaur standing over an unconscious boy.

Bravely we attacked and with the first blow the dinosaur morphed in size and shape, becoming even more devastating. Each time we struck it, it grew. Mommy, my first animation met it's end during the fight. Amazed by it's ability to change shape reflexively it took me a while to follow the tactics prescribed by Brilla. Apparently she was quite wounded by the creature. I must admit to wondering if the size change was inherent, and would get passed along if animated.

Returning So Ho Ni and the other children to their mother, we were told that the dinosaur was the animal companion of Bi Butsu, a close friend of the Emperor. We revealed to her that we were friends of Bo Beng and were "invited" to stay at the Summer Home, forever. We both played along, going to our separate rooms. Brilla wished to spend a night in a real bed and promised to catch up with me and the others in the morning.

Fuelwen: I am jealous of the fight missed. This creature would have been most exciting to battle.

Brilla: While crossing the bridge Nathanial and I were met with a woman's deathly scream. The guards were mostly unresponsive to this and the responsibility fell on our shoulders.

We eventually ran across So Seun, the source of the scream. She informed us that a dinosaur ran through the area, scaring the children, including her son So Ho Ni. We vowed to find him and then set forth into the labyrinth of a castle further.

Eventually we came across the children playing in an open grove. We found that the dinosaur was the companion of Bi Butsu, the druid of the empires house. There is some drama that only truly the Beng family can understand with this circumstance and I'm sure we will find out more from Bo at some later time.

When Nathanial and I cam upon the dinosaur we were met with an ill surprise. Every time he hurt the beast, it would grow into a larger, more dangerous dinosaur. Nathaniel got a little carried away in the fight and wouldn't let the dinosaur decrease in size, causing it's wounds to overtake the beast. I was forced to flee from the fight after taking two deadly bites while it was in it's T-Rex form. I'm just glad that Nathaniel did not stick the child in the bag of holding while I was gone since he lost Mother in the fight.

After the fight we reunited So Ho Ni with his mother. We were then invited to stay in the home. There was the silent pretense that this would be for the rest of our lives. Seeing as Nathaniel and I have the ability to change our appearance at will we played along. Nathaniel did not really like the idea of being the the castle more than he had to and made a quick departure. I, on the other hand, felt that some pampering and healing was due and I decided to stay the night.

I attended a dinner to gather some more information. Evidently the Beng family is mostly on good terms with Bi Butsu. During the dinner, though, it was mentioned by Lu that, "I like Bi Butsu. I cannot lie. I don't know how my brothers can deny him. But, now, he has gone too far." Unfortunately, the Beng family has no power to do anything about the situation. The staff confirmed that they are being held against their will with the only resolution being to go to Garl and help out Bo.

Once I discovered all I could, I escaped the castle as a kabuki dancer.

Nathaniel: We set sail for Garl the next day. Due to Bo's insistence on not waiting for her, we nearly left Brilla behind. The island of Garl makes me feel as though I was one of the smaller races, like a gnomorph or koboar, visiting a common island, as much of Garl is built for larger races. One of the smallest people on the island I saw was the dockmaster, a brutish Hill Giant.

Having landed on Garl, Bo led our search for Uncle Bob, also known as "Big Cow". There was much discussion with Big Cow, and that I will leave for others to describe. However Big Cow was able to give me more insight into the jeweled scepter we found. He believes that the scepter belongs to a king of an island that the Fan empire had planned, or was planning, to take over.

Fuelwen: A poet. I enjoy poetry, and respect it as a key warrior art. Of course, the Big Cow sings toothless poetry, about farming and the agrarian lifestyle. In terms of technique, it has merit, but the subject matter is awful.

Brilla: They almost left without me! I was only gone one day! That is one fine "thank you" for helping out Bo by making a great sacrifice of staying in that luxurious palace for information.

After barely making it onto the ship we headed out to Garl. This island was full of giants, making me feel smaller than I usually do. Our goal on the island was to find Bo's Uncle Bob, also known to the locals as Big Cow.

He was pretty knowledgeable. He informed me to look into the libraries of the island palace we just left (ARGH!!!) to find out more about my plight. I'm just glad I have a place to start looking.

Ya want some head?

Rake: I got to play with dock whores. Then things got fun. Some uncle of Bo inside a weird body decided to slide inside my head. I learned from our joint mind share a few tricks. Allowing me to mature, and giving Bo's uncle a few nightmares. What do you expect when a resident of the plane of nightmares resides inside a feral serial killer with an implant of the terror of children. So now we help Uncle with some pirates, blow up a celebration, and replace family ties in a weird society that belongs to Bo who doesn't really want any part of it. Explosions, oh yeah!

Fuelwen: I am not an asssasin. Bo's family problems could be resolved with the death of a local official, and the Big Cow wants him dead for his own selfish reasons. As the mastermind, the Big Cow wants us to blow him up, and I cannot condone it. If you want someone dead, you kill them. This kind of skullduggery is an embarassment. But, local laws being what they are, honorable combat is not within our reach. I've agreed that we can use an explosion to stun him- there's nothing wrong with tilting the field of battle to your advantage.

Brilla: Evidently Uncle Bob is some sort of giant yak-man that is able to possess others. He got inside of Rake when he talked to us further. I don't know if that was the best choice on his behalf. There are a lot of things floating around in there that I wouldn't want to be subject to.

After some negotiations we went from a plan of blowing up De Deng, noble turned powerful merchant, to stunning him and having Uncle Bob taking over his body. This was mostly due to Fuelwen's protest. I understand he feels like a fish out of water, but he will have to adapt eventually.

Also, I will someday get even for them trying to leave on the ship without me...

Brilla Since shirts are under the "physical improvement" header, I'm looking for a bodice of hardiness or something of the like (+2 Con) for as close to the 4000gp mark as possible. I will do some negotiating on the price and will wait for creation if need be. (A torso makes more sense than an throat slot does, to me anyway).

Rake: Rake will be looking for some ungents and a couple of improvemets that could fall under grafts. Plus some items that will allow him to move and breath underwater since we our bound and determined to go deep sea fishing. Maybe a POTION OF POLYMORPH?

Fuelwen: Daryl still owes me some "out of session" stuff about what the Celestian clerics found for me. Other than that, there's no shopping needed, no errands to run, so Fuelwen will keep an eye on Rake between sessions.

XP will be calculated after this one most likely.