Wrap up of the Ambushing Do Deng stuff, followed by a guest session by Remy.

Nathaniel: We attacked Do Deng in concert. Brilla and our Vanasa Duskblade companions jumped aboard the ship quickly, shooting a eldritch blast at Do Deng, weakening him. As Rake cut the anchor to put the ship out to sea Ethyl struck Do Deng with a Dimension Anchor, robbing him of his escape mechanism. My hag's eye was easily shrugged off while Bo, in constrictor snake form, grappled Do Deng into submission. Do Deng was defeated and Big Cow now inhabits his body.

Brilla: The battle we prepared for was a fierce one, though that was not what we received. Due to diligent planning from the members of our group we were able to get the drop on Do Deng. He attempted to escape many times, though with our boat headed to sea and him unable to teleport, his efforts were futile. Big Cow eventually took control of his body and we were gifted with the contents of Do Deng’s Ship.

New crew; Discovering the home of the scepter

Nathaniel: Bo's family no longer being threatened, we began to gather a new crew for the ship. It turns out that most seafaring men in the Fan empire belong to someone, so our new crew is made up of former prisoners and deserters. I spent time with the crew to hear their stories.

I was soon approached by one of the more likable of the crew, who began to ask me about the scepter I carry. I produced it at once and was rewarded with a more full recounting of it's history. The scepter that I hold belongs to the Kingdom of Gicele, an arctic island that is home to warring beast people and giant insects. Apparently this crew member was a deserter of a recent attack on the island that was successfully repelled. He was helpful with locating the island as soon as he had assurances that he was not going to be forced to face that enemy again. He had lost friends in that campaign.

Rake: We get to travel to a floating icicle to deliver a scepter apparently belonging to a lost family of rulers. Really need to convince friends that we need to find items and quests in warmer climates.

Brilla: I decided it was time that I took the ship toward one of my personal quest for a change, but like always, there was a detour. They are lucky I am such a giving person or I would have ignored the need to return the scepter till a later date. The island is on the way, though, and our new crew seems familiar with its location. They say it is an island full of beast-men and snow, and that they are unable to conquer it. Sounds interesting, in the least.

Nathaniel: On the west side of the island was Portland, one of the only ports on the island. The settlement, including the docks, were abandoned. As we explored we discovered that all of the buildings, as well as the docks, were crafted from large blocks of stone. Reflecting on the tales that I've heard, tunneling creatures on islands such as this seemed a likely reason to build with stone.

Turning a corner was our first local, a half urskin and half penguin, clad in half-plate armor. He was checking shutters when we noticed each other.

Rake We run across islander who is checking village we trespass through. Turns out he is being controlled by the ice bug invaders. We fight them. I smash some of them. Islander breaks free and bugs quickly dispatched except for one that runs away.

Brilla:I did not like the looks of this place from first sight of the docks. They were barren, not a ship or person in sight. The crew was too scared to even step foot on the island, so we left them behind under the care of Deenar.

We wandered through boarded up houses and ghostly streets until an ursguin came upon us, attempting to draw us near. We could tell there was something wrong with him, and it was soon discovered he was controlled by a group of formian workers. I found myself driven to melee with the aid of Ethyl, making our magical battleaxe a flaming weapon. We dispatched the formian and the next day, after the domination wore off, we found ourselves with an ally.

Woman visits in the night

Rake: So we march through center of floating icicle and heat white freezing curtain and forest. Then we pass through to make camp. A woman of snow came up and talked to our gude. Gave snide remarks and wandered off. Weird island, needs to be warmed up a little.

Brilla: During our travels we came across a fey that seemed to know Koven. She was friendly, or at least as friendly as maddened fey get. She seems to have almost killed Koven in the past and would not let us pass freely unless we gave her something pretty. Thinking quickly, I remembered Nathan has some "Dragon Polished Pearls" that she gladly took one of for our passage.

Carving out a home

Brilla: Their home is made of solid rock and is quite impressive (and I must get back to class now) 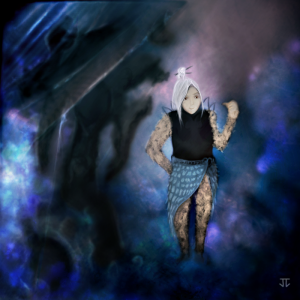