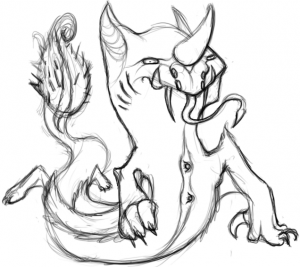 Fuelwen: The plateau gave us time to catch our breath and re-group while we waited for Killibron. There were so many facts that we had collected that I wanted the time to process at least some of them. I thank Carn for teaching me the principles of scholarship.

Killibron returned and we exchanged tales, relaying what the hags told us. He does not believe in the great island in the Hags' map, thinking it a fiction. He may be learned in many things, but knowing the way the islands and the planes interact, I am less convinced. Could there have been a time when one plane was far more dominant than the others?

Regardless, Killibron knew nothing of the motions of the islands, which proves yet again that we have an important strategic advantage for long range ocean travel.

He also confirmed that he has a plan for riddling the world with portals, attempting to end all scarcity with their powers. He's a fool, but a learned one. And his idealism makes him weak. We can use him. He left to continue investigations on Great Fortress, and we departed for Storybook Island.

Fuelwen: Like Dwarven architecture, this city was overbuilt in hopes of future expansion. I suppose when your major denizens are undead, one plans on a longer timeline, but I question the economic value of such long term thinking in the Wilding.

It was in one of the empty alleys I was called by a Drow. Of all the Squeakies, the Drow are the ones I dislike the least. They are cunning and cold. He made a simple request: I was to place a package. Upon questioning, he told me the package was a magical explosive, and I could have a second package if I so desired. They would detonate ten minutes after they were left unattended. I was to attack any building of my choosing.

Essentially, the Drow were tired of the undead blocking their exits into the greater world, and they, like myself, wanted to begin an empire. At first, I was hesitant to help them- after all, Storybook Island was weak and ripe for conquest, which it would not be under Drow control. Then I realized how sniveling and cowardly that truly was. I accepted the offer on the condition that I would not kill anyone with a bomb- that too would be cowardly.

The College of Eternal Recitation and Arts and Crafts

Fuelwen: We went to the College of Eternal Recitation, which offered us the opportunity to do research. Faced with the prospect of fighting through hours and hours of rigamarole to get access to a storyteller, I crossed the street to the library of written books. I was able to get a five year lease on some promising volumes. They may help me on my quest, they may help solving some of the riddles posed by the world around us. It will be some time for me to study them.

That errand done, I found a nearby government building. Fortuitously, it was Taxation offices and mostly empty. Unfortunately, I couldn't get access to the building without revealing myself, which meant I was hesitant to keep a bomb on my person after bombing a building- I left both packages at the site, thus successfully avoiding my reward.

The bombs went off, and I learned later that the Drow staged a successful assault on the building.

Fuelwen: Thus embroiled with the local revolutionaries, we discovered a way to leverage all of these things to bring about Nathaniel's revenge. My cautions against revenge were forgotten in the face of advancing far more interesting goals, like breaking the back of the state's power on this island and harming a growing cult.

Nathaniel's target was a lead recruiter for said cult, and a ripe target for the Drow and the Halfling paladins Bo encountered. They offered aid if we could identify the time and place where she would be vulnerable. Nathaniel identified it as a service in honor of Wee Jas. Armed with another bomb, we planned our assault. We knew it would cause collateral damage to the locals, but that was insignificant to us.

Nathaniel successfully bombed the vampire, weakening her spawn and giving use the opening to attack in the middle of services. We were able to kill all but one of her spawn and she made an escape out a rear window, turning to gas and vanishing before us. It wasn't quite the successful strike we had hoped for, but her power was broken- without spawn, it's unlikely that she'll travel openly until she rebuilds her strength.

DM All of her spawn she had with her that day were taken care of. The Drow and Halflings managed to slay the rest, including the one that was beating up on Brilla when it followed its retreat order.