Wild:4 They Don't Giff A Damn On Quiet Citadel 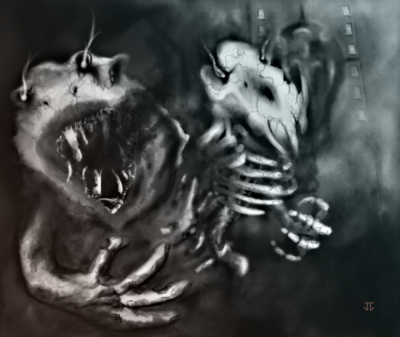 Fuelwen: Welcome to quiet citadel, a city that praises weakness and worships failure. We stopped at the first bar we saw to find our way to the Salty Dog. There we discovered that, when one buys a drink one must also buy a drink for the poor. Of course, with no incentive to work, there's an entire underclass of dolists that cling to the scraps left by their betters.

Rake, intent on making them work for a living, hired the three wastrels beside us.

Brilla: Nathaniel and I were taking inventory of the ship while the rest of the group went into town to get us rooms at The Salty Dog. Gods only know what kind of trouble they are going to get themselves into without my guidance.

Also, staying on the ship helps to insure Deenar's safety. I know that Nathaniel had a death wish for him on our travels to here, so it is best that I keep an eye on things until tempers cool and Nathaniel realizes how valuable he can be to the crew, at least in the hiring of some capable hands for the ship. The port area does look pretty dead, though...

Nathaniel I stayed on board the ship to ensure Brilla's safety. She has become a lifeline for me in this world. The indifference I've felt for a long time has begun to melt away. Perhaps if I made similar connections with some of the others, I may begin to feel normal again.

Fuelwen: The Salty Dog was more of the same. Yelena, the local paladin, forms the remnants of lawful authority on the island. Everyone else has left on some foolish campaign. For all the human refuse in the streets, there were a handful of able bodied sailors in town. I hired them on and introduced them to the "captain".

Rake hired everyone else in this tavern and built a small army of peasantry.

Being a captain is pretty boring work. I'll never be able to join my ancestors sticking to work like this. I need some adventure and heroics of one sort or another.

Escapades in the Town

Brilla: It looks like the Fuelwen came back with a somewhat capable crew. I was hoping we would leave this for Deenar to do, though I'll be sure to have him check the crew over later. I have to validate his existence on this ship somehow.

Rake also seems to have picked up a crew of his own. It appears that a few of them are missing hands, and most of them are missing their wits and bravado. I just hope he paid for this crew out of his own pocket, because they have no place on the Seawolf's Folly. At least we are getting the underside of the ship cleaned. Chances are, though, that they won't say around for long with Rake "punishing" them so.

Nathaniel It would seem that gruff and burly Rake can raise an army at a moments notice. From what I've gathered, listening to parts of the story, is that these scoundrels were complicit in robbing him. Rake has a very powerful personality and seems agreeable with me. Perhaps I should discuss something with him.

Brilla I really need some rest in a real bed so I follow the rest of the crew to The Salty Dog. On the way there Rake keeps speaking of the joy he gets seeing a martial child running the place. It appears he has not done much traveling as that child he spoke of was an overzealous halfling paladin that parades around law like a stick up her ass.

While find out that our room is actually a communal that stunk to high heaven, we were approached by a giff named Kordrik. It appears he needed some help recovering the bodies of his companions from a town called Hazy Hamlet. Finally, some noteworthy adventure!

Brilla On the way to where his friends fell from an attack by a gargoyle, we learned that Kordrik likes "booms." Explosions, fires, and loud noises seems to really get his race going in a stupor frenzy. I made sure to take note of this and called upon Aym to protected me with his fiery grace. Also, with this socialist economy, she seemed the perfect fit.

We eventually wandered upon the area of were the battle happened and Fuelwen and Nathaniel broke off from the main group to scout ahead. In a small, walled off area, they found the bodies of Kordrik's allies fused together in half-skeleton, half-zombie undead. Nathaniel was very taken by them, but failed to force his will upon them.

It was hard-fought fight in which Rake must have been affected by some sort of compulsion to check all the huts during combat. We were victorious in the end.

After the battle we searched the huts and found an attack plan against Quiet Citadel by the church of Erythnul. It appears that they are amassing 20 soldiers, a handful of clerics, and a couple of gargoyles to mount an offensive. We tied up the bodies that Kordrik needed and headed back toward town.

Rake Gggrrrrr. As the battle began I left the mindless walking meatslabs for the others while I searched for the enslaving cleric and the gargoyles. All the huts had in them where tools and food supplies. The enemy had left already, and the meatslabs where handled easy enough by the others. The walking feast the others called Kordrik seemed to have problems about focusing his need for destruction. We may need to find an outlet for him, maybe in a fire pit hhhmmmm.

Nathaniel The giff trail—impossible not to follow—led us to a muddy clearing with a nearly derelict wooden fort in its center. Calling upon my hertiage I scuddled through the grasses, hidden from all but the most keen eyes. Quietly I scaled the walls of the fort and what I saw was beautiful. The giff bodies had been fused together into two-headed half skeleton and half zombies, which were quite obviously fully lethal. For a moment I considered attempting to gain control of them, but if their creator was nearby that would cause a ruckus and my companions were too far away to save me.

Returning to the group, we crafted a battleplan which would start the moment I gained control of the marvelous behemoths. Once everyone was in place I called upon my will and declared that by the will of WeeJas they would follow me! I felt the rush of divine power burst forth, more powerful than ever yet the creatures were not swayed. Sadly, the beasts were beyond my gifts to command.

We discovered that priests of Erythnul had used this fort as a living area and that it was they who crafted the giff skelpies. Sadly they left no notes behind that would hint at their construction.

Fuelwen: Curse these toothless cowards. Their weakness and disinterest, their decadent corruption should be its own reward. The only reward they could give that would make it worth my time to protect them would be the town itself- something which they have already declined.

I hate them, I hate their town, and I hope they all die.

But I feel no love for those who worship senseless slaughter as well. To maintain a lawful authority, I need to take action. So we must go on a hunt for gargoyles and evil clerics. Given the fact that they expect no resistance at all, we have the element of surprise on our side. I also think we should take the battle to them- ambush them as they approach the town.

Nathaniel Before we dive into the irony of slaughtering the clerics of slaughter, I ask that we attempt to make ourselves stronger and more informed. Perhaps one of their group knows something of interest that may be relevant to one of our lives. I recently learned the lesson that an enemy can prove valuable after defeat.

Fuelwen: Of course. That reminds me, I did ask, but we never quite got an answer- is there a timeline on the attack plans? That gives us an idea of how we need to prepare.

The plans did not have a date on the attack listed other than "during next 'crusade'".

Brilla I really have my reserves against helping these people. They know that Erythnul fights against them on a daily basis, but instead send out all of their fighters for a crusade, leaving not only the town defenceless, but they also took their leadership with them! The only people we can talk to are the drunken clergy and a spoony paladin.

The clergy was of little help to us, and the paladin even less. In the end we went to the town center and rang the bell that denoted free food for the masses. The commoners gathered in the area and I gave them quite an inspiring speech about how if they work to defend their land, they will be marked as heroes and never have to lift a finger again. The lazy commoners began to thanks the gods and willed themselves to fight for their lives.

We also found a blacksmith that put to work on producing spears for the peasants. At least the skilled craftsmen of this village have their minds about them.

This will be a hard fought battle, though I doubt I will shed a tear if any of the commoners fall. I better watch myself before I sound like one of those worshippers of the mythical god Robhim.

Nathaniel This town does not desire to defend itself. I am uncertain what our role will be in the upcoming battle. What is worse, being a murderer or allowing yourself to be murdered? It will be interesting to see how this plays out.

+1000 XP
Loot on Slush page.
"I'm sorry, sir. I can only buy half of those from you legally. The rest you'll have to donate to the town militia."