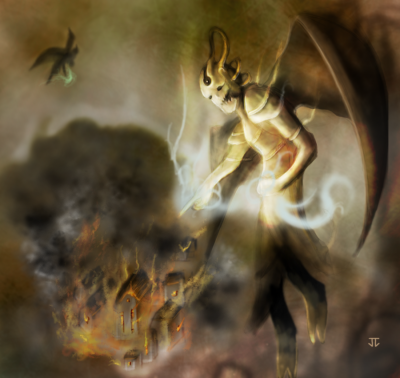 Fuelwen: Against my better judgment, it was time to prepare to defend the town. Much to my surprise, the townsfolk rallied and were prepared to actually take up arms and work to defend themselves. Not entirely toothless, then.

We worked to fortify the defenses, closing the gates, arming the public. We moved one ballista from our boat to the wall, prepared fire pots filled with sand. Numbers were on our side, and the fact that there'd be even a token resistance gave us the element of surprise. I did my best to get people on the walls in the best distribution, and set up the most realistic plan for holding it.

We realized that the most likely day for them to attack was market day. With the gate closed, there was little they could do- market day was canceled, I assume. In any case, we didn't sell our goods.

Nathaniel: Considering the impending doom for the citizens and my inexperience with war preparations, I defaulted to that which I do best—interview the soon to be dead, so that their stories will be remembered and passed on. After a decent sampling of stories, a master narrative was constructed, a tale of struggle and the never ending demands of an unfair life.

Satisfied with the tale I sought out the inebriated clergy in the hopes of rendering them unconscious so that we might use the alcohol as fuel for Molotov cocktails. My natural resistance to the poisonous liquid had left me with no effect as we drank and drank and drank. Words slurred and unintelligible, the holy men were obviously drinking professionals. In another society I'm certain they would've made great beggars.

Brilla: While I am good at convincing and motivating people, I had to provide in preparing the town for the coming invasion. Sadly, I think my lackadaisical attitude stems from the fact that I don't see why you should help someone that doesn't want to help themselves. At least I motivated the group of rabble into some sort of action.

Fuelwen: They attacked near nightfall on market day. In the heat of combat, I didn't stop to consider it- but this was only my third such battle, and the first one where I laid the plans, and my first on dry land. Tactical principles are the same, especially the one about the best laid plans falling first in battle.

The clerics leading the army did not attack. One appeared, laid down blessings of their bloodthirsty god, and hid or fled.

Our small band couldn't manage the entire battle, and instead held off a pair of gargoyles- or so it seemed. One of the gargoyles was actually a crow-like being in disguise as a gargoyle. It's irrelevant. It was a near thing, in the battle, but we bested them both. The tengu was wielding magic, and nearly felled me with a single spell. Rake fared better, and wrestled with the being in the air; the two of them found the ground. Repeatedly.

Rake nearly died, but the tengu did die- so the victory goes to Rake.

Nathaniel: "...and thus did Rake pummel the creature to death using the ground. An ironic end to an avian creature."

Brilla: The battle was a fierce one, though we did not face the amount of opposition that we expected. Kordrik was kept far, far away from us as he manned the artillery while the clerics attempted to see past the haze and help the commoners survive. Two of the gargoyles kept the clerics distracted, though they were able to handle them well enough.

We were left with a gargoyle and some creature called a tengu. The rest of my party seemed to have trouble dealing damage to the gargoyle so that was left to me. It ended up escaping even though I tagged it with an arrow at the end of my range.

The tengu let out a mighty war cry that ravaged Rake, but he miraculously survived. The tengu was killed, though, and in the end the battle was won.

The town's survival rate was 50%, with moderate fire damage.

Fuelwen: Four gargoyles were dead. We held our wall, the peasants held theirs with Kordrik's support- and he didn't blow any of them up! Quite the feat, for him. The local clerics did their part, and the day was won. All in all, I was impressed by the response of the town. They're not quite as hopeless as I feared.

Brilla: Despite Feulwen often boasting that he is the brightest of us all, he seems to fail at mathematics. We only killed (technically) three of the gargoyles. I have a feeling we will yet again see that gargoyle as well as the coward cleric that hid in the woods.

I am surprised so many of the townsfolk survived. Maybe they are worth more than I thought.

I am very bitter. It is probably because this victory feels so hollow. The next day I think I am going to call upon one of my more uplifting ancestors to guide me.

Fuelwen: The clerics behind the attack escaped, and we wanted to move while the trail was hot. With Ko's nose guiding us, we set off after the one we had seen at the start of the battle. It was slow going, as tracking usually is, but we were brought up short when we came across four gargoyle statues. Actually statues. Statues from the Salty Dog in town.

This put our minds racing. Were the gargoyles we fought attacking from inside the town? Or were other gargoyles waiting there? We gave up on the clerics for the night, and hurried back to the Salty Dog. A quick search confirmed that there were no other lurking gargoyles and there were four statues missing. With that, we went to bed to prepare ourselves for the next day.

The next day, we set out after them again. The trail was cold, but Ko's nose still picked it up. Before long, we found ourselves standing outside of another unnamed village. No wall, but plenty of hovels scattered around in a clearing. This is where the clerics had fled.

Nathaniel: Of course the unholy servants of the lord of slaughter were able to escape us while leaving a relatively easy-to-follow trail. A chase scene helps to build suspense, allowing those hearing the stories retold to feel a sense of anticipation. The question remains, how will the story continue? Was the trail a false one? Have they set a trap for us? Will they have more undead creations?!

Ko: Ruff ruff! (Points at a rather large bear.)

Brilla: I can't believe all of the plants and crops that got damaged during the attack. How dreadful! I did my best to fix up some of the plants as I could, though a lot are beyond my help. Anyway, we must be off into the woods to find that encampment before they do any more damage to the wilderness! Oh yeah, and the townsfolk.

On our way we found some easily laid out tracks and were on our way. We got a little lost, seeing that the group didn't trust the directions that the plants gave me, acting like I was struck crazy. We came upon a magnificent bear, though. He had big fuzzy cheeks, a cute brown nose that kept sniffing the pollen in the air, and some bony plates on his face that made him look like he was blowing a kiss. He smiled at the group and gave a friendly growl! I cooed at him a few times and then he just got this odd look on his face and walked away. He must have been shy.

Ko eventually found the way for us again and we came to a creepy village in the middle of nowhere. The buildings look a bit spooky, so I'm pretty sure this is where we want to be to finish what we started.

Brilla
Your ancestor shines her blessing on you (kind of creepily). +5 to next binding check for Camille; can expunge (w/o feat) your current vestige & rebind to Camille as a 1 round action for this once. You also gain one free, unlimited, use of Expunge, as the feat is written.

Nathaniel
That bird doo-doo on your tongue starts to grow. Your next tongue attack inflicts a filth fever, no incubation, DC 10 + 1/2 HD + CON + 2.

Bo
Ko's ferocity is starting to take over. Ko's next successful trip triggers an Improved Grab. He must stay with that foe until it or he is dead (not just down, but dead).

Rake
Fate would have it that you should be enraged. The next time you rage, you can rage as an immediate action. (If you rage normally, this goes away.)

Fuelwen
You are starting to become disappointed with your lack of successes in combat. The next two times you charge, you get a full attack at the end of it (as if you had the Pounce extraordinary special attack.)