Sleepin' on the Bus

James: Long bus rides are fuckin' boring. I wish I could read while riding without getting motion sickness. I'm going to take a nap.

Brick: When we're on the bus, I can't help but notice that there are several chicks on the bus that seem different from the other ladies here somehow... They're hot, I guess for non-brunettes... Aw, well, must be my imagination.

As the bus goes, I suddenly start feelin' really tired, & I drift off to sleep...

Chang: There are a lot of hawties on this bus but I try to only look out of the corner of my eyes. Becca is glaring at me less, so I think that she is falling for my charms... 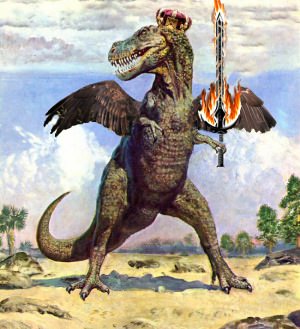 James: What the fuck, I'm a dinosaur? And these weird fairy things are attacking us, unprovoked. Life is weird sometimes. Time to kill some fairies.

Brick: Sweet! I'm a stegosaurus! And I get a huge flaming sword! I find all the gang's here, & their all dinos, too! The hot chicks from the bus are here to although they look like faeries & more... powerful. They attack Ilke so I fight against them. Ilke blinks out after a weird portal appears. After we beat each of the faeries they disappear to. Suddenly, there are meteors fallin' around us too! Then we're on the bus again...

Changosaurus Rex: Whoa, I'm a dinosaur and my arms are so tiny, it makes me so Changry. Using my vast intellect I use science (bitches) to build a prehistoric magic eight ball so that we can divine some information. We find out that we are genuinely in the past. Everyone fights some intimidating faeries—YOU WEREN'T THERE, SHUT UP—while I, uh, go for reinforcements.

James: Okay, now I'm a caveman. What. And fairies are attacking again. Time to kill them again I suppose.

Brick: I get supertired again & wake up as a caveman which isn't dinosaur cool but is still pretty BA. The faeries come again & we waylay into 'em, but they cut off Ilke's arm!

Chang: Looking at my reflection in a pool, I realize that with the extended brow and limited thinking capacity we are either Homo sapiens neanderthalensis or football players. The fae return and I bravely supervise the battlefield.

James: ...and now I'm a medieval courtesan or something. Enough of this shit, I'm willing myself to wake up from whatever funky semi-dream this is. And do so.

Brick: We wake up again, & now it's in Germany. I know that because ESPN shows this castle we're in whenever they talk about the German national soccer team. The faeries attack us again, but this time they're weaker than ever, but for some reason they freak me out so I run into the castle to get a sword. We fight again. And again they take off Ilke's arm.

We wake up on the bus & the bus is empty. Apparently, we made the pit stop in Ohio. All of us are here except for Ilke. We go lookin' for her, but she's nowhere to be found. Suddenly, we get a text that tells us to keep going & that she has something important she has to do. I hope she has fun wherever she is...

Sir Chang: Now we're on top of a castle. I know what is going to happen next, so I bolt for the inside of the castle and find myself an axe. By the time I return to the group the fae are on us! I know how to end this and I swing at Ilke's arm to sever it as a gift for the fae. Damn that Ilke can move, I was no where near hitting her.