Brick: Hey yo! What's up with this?!? Me & the team run out from the locker room & find the arena, like, a third as full as normal. We even only got one cheerleader. Man, I know her, but I just can't remember her name. 'Course, that don't bother me none. I play as if the stadium is filled. Coach puts me in as a receiver, & I land a few really solid plays clinching the Price-slasher's victory!

After the game, a bunch o' the guys talk about a flyer they found for a nerd group that met up as the same time as us & took a lot of the audience so we decide to pay them a visit...

James: What the hell, man. I come out to party and have a good time with a ton of fellow students, and the stadium is virtually deserted? What the fuck am I doing here - I don't even LIKE sports. Time to go find out where all the action is.

Becca: Wow I thought people went to the football games. Are you kidding me King Splender and Guy are here, this is really lame. Football games must be for lossers.

The Everyday Discounts Now Cheer For the Chess Team

Brick: We go & find the party. It's in that maze-ish hall for those nerd classes. We bull our way past the nerd-bouncer & head inside. The boys try to get rowdy & I'm right there with 'em, but they start in on Ilke so I break it up. No need to go attackin' my friends. Plus, the girley's got moves. I'd hate to see a teammate out for the season being beaten up by my friend.

James: Word is, all the action is at the chess tournament. Chess ... tournament. One more time, CHESS tournament. Goddamn weird. I so totally don't get it.

Anyways, we make our way over there. Confusing building, for sure. But we find the area, and witness a fight brewing between some butt-hurt jocks and smarmy nerds. Some jackass named Chang, who calls himself "Cyclops" or "Gambit" or some comic book dork of a name is the worst of 'em. Brick manages to tame the beasts and prevent serious nerd injury. So we go in and check out the tournament. Dull, boring, no open bar. I try to play a game, but some asperger's dickhead gets agitated, so we just leave.

Becca Really King Splender and Guy knows where we can go for the "hot spot". The chess match? Some people have called me a nerd, but these people are what makes nerds look bad. Chang "gambit" capton of the chess team is hitting on me. Just what I thought King nerd. his attitude is why Men will never be leaders in this world, thinking they are so great everyone should love them because they can do one thing.

Brick: The group thinks somethings up with the Chess club 'cuz they ain't never been that popular before. We go to the museum & check out the art class exhibit, & I find I really like art! Cool. I also find a sack in my pocket filled with sand & a chess piece. Not cool! I saw the guys using the thing like a hackey-sack. The thing reeks, & I think they left in my pocket as a joke. When I find out who did it, they'll get theirs. 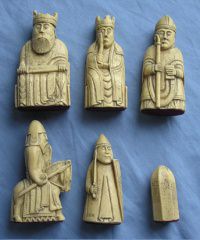 The knight in the lower left is the piece found.

James: We put our heads together to try to figure out why football has been replaced with chess as the popular spectator sport. One of us gets a lead on a student art exhibit, so we go check it out. It's trash. REALLY awful stuff. Some of it from a student who is typically pretty good, albeit overly political. There's even a work that's just a Snickers bar rammed into a dumb cartoon horse. The art was unappealing, but it did leave me with a strong hankering for that particular candy bar.

We're about to leave when a bizarre sack falls out of Brick's pocket. He didn't know about it, it seems to have been planted. Scrutiny reveals its nature, the remnants of a delivery mechanism for some sort of witchcraft type spell. Lizard guts, colored powders, and a chess piece, among other odd tidbits. Not alchemical, but effective nonetheless. With no idea what it did or who put it there, we go into research mode. Guy says he has a few books that might help, so I head to his pad.

Becca I confused ... Brick get it. He really knows stuff about art. He see Art in Art.

This episode was sponsored by Snickers. However it was discovered that one of the propmasters was malicious and purchased Milky Ways to use on set. There will likely be ramifications.