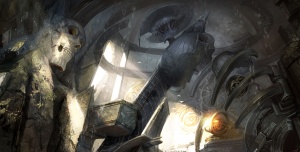 Foster has a bad dream that distracts the group with her reaction from noticing the sudden cold front that threatens to overtake the airship. They land in the war torn town of Minsc at the border of Arvis and Durell and run into the locals who have a fair share of problems the group tries and helps with.

Foster
Viewed in the first-person by her.
She remembers none of this when waking.
Witnessed by

Brooks
He was free to walk around in the dream, but could not directly interact or influence it.

Your sleep is deep, and your reoccurring dreams return, not that you would remember. Once again you are clad in ancient, regimental armor. An ornate axe is at your side, and you rest your hand upon the heavy haft as it hangs off of the strained leather brace. You stand atop a cliff face overlooking a beach, looking down at the scene below.

Dwarves are rolling out machines of war, hulking juggernauts of bellowing smoke and grinding gears. Elves rally with dire animals and the forces of nature; fantastic elementals dancing with fury and rage.

The battle is pitched, with neither side giving ground. The stalemate feels like it continues for hours, when the elves finally begin to break through the dwarven defensive line. You give a heavy sigh, and reach down to a pack at your feet and produce a horn made out of a giant fang. Upon blowing the horn, the sky slowly begins to break, the low hanging cloud of war being dispersed by the powerful flapping of wings.

Chromatic dragons, being ridden by dwarven cavalry, join the fray. The tide quickly turns to favor the dwarves and the elves quickly disperse, retreating to the treeline. Gouts of flame and acid etch the setting sun with a beautiful carnage that can only be appreciated by one that has lived war.

As you watch the battle unfold, you are met by an embrace from behind. A slender pair of feminine arms work their way down your shoulders and meet at the middle of your chest. They tighten, pulling you close and hold you against a soft frame. You look down, trying to hold back the fluster in your face and the familiar butterflies you feel in your stomach.

The companions hands loosen and move the hair from your tucked face as you keep your eyes still on the battle. You catch a glint of purple from her nails as she gently caresses your face in moving your hair back. Her hands finally fall on your shoulders and you find yourself being lifted from the ground. You look up and smile, as an amethyst dragon slowly helps you clamber onto it’s back. You draw your axe, yell a war cry, and enter the fray.