GPCFBRPGN:4 E2S2 How Gideon Got His Grove Back 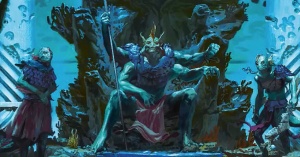 GM: The players meet with Malcolm at his estate.

Gideon and he join in a totem pact and everyone agrees to end the sahaugin threat to seal the pact.

Foster: This episode really kicked off the longer plotline with Gideon. I really appreciate that there are plots we can dip in and out of, and it's not a step-by-step process to get through the game.

I think this episode is one where the group really solidified its fighting style - Foster in first, Blink from a distance, Gideon bouncing in and out, and Brooks and Amsah striking where it makes the most sense. You can feel the group getting more comfortable with our skill sets, and the responding intensity of the battles is really fun.