Nict: We have choices set before us: 1) Go to the swamp to discover more about this "da-root" that the dream knights seem so keen on. 2) Look into Lord Salminay's potential involvement in traitorous activities in the north. 3) Return to Brody's tomb to re-secure the book. For some reason, Thad seems really keen on the swamp. Tarralon and I seem to hold the keep in higher priority. Dario seems indifferent except he will not go back to the mausoleum. After a day, Tarralon decides to abruptly change his mind and choose to go to the swamp. I tell him that I am willing to go under the condition we send word to Lord Dunnay via the dream knights to see just how high a priority Lord Salminay's activities are. Our return answer was unexpected. All we receive is an image of next spring giving me the impression that it can wait until the spring... so to the swamps we go...

Nict: This group reminds me of home... on a "smaller" scale. The hustle and bustle of caravan life reminds me of my own days, not so long ago, traveling across the world. I can almost see Sehra & Sheiah as they "helped out" (mostly got underfoot of the rest of us). The air is cooler now and the first light flurries of snow have begun to turn up. These halflings seem jovial enough in the weather and happily share a story and a drink with my companions. We resupply here as there will be fewer places of note further on our path according to Tarralon.

Pigs! Too many Pigs!

Donovan So the rain's been coming down fer a while now... Jeff's been squeeling all day. Poor fellow, sprained his back right leg. And now I've got people banging on my front door. It's fine, I s'ppose. Could use the company.

Donovan Sally was a great tasting pig. Had some whiskey with her. Those folks who banged down my front door, weren't so bad after all. They sat themselves down and ate Sally with me. That

Tarralon bloke, he was obsessed with salt, fer some reason. And my potatoes. He wanted to talk about them too. I don't mind so much, 'cause the green feller was nice with helpin' with the pig.

Donovan They asked me to show them the way to Kombja, and they had a keen interest in darroot. Wanted to know where it grows. I said I would take them down the path, and if we ran across some darroot, I'd show 'em it. I have to get something to help Jeff with his healin', anyway.

Over The River, And Through The Swamp... 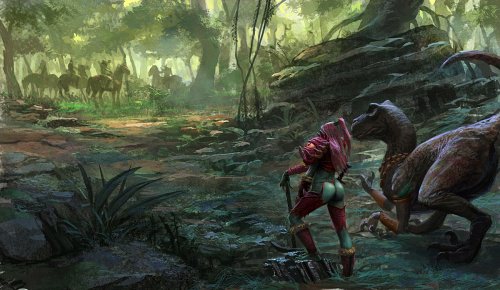 Donovan Alright, so we set off through the swamp this mornin'. Why the blazes I agreed to this, I don't know. But, I said I'd come, so I will anyway. But, as we were walkin' along, they told me to stop. Blast it all if I can't see a thing. The green-man,

Thaddeus, said there was something up ahead. So, while I can't see it, I stop anyway. Turns out this gent up ahead wasn't too friendly, and we got into a bit of a scuffle. That

Dario, he ran off, 'perently he killed a great big lizard. Lucky him, there's good eating on lizards.

Donovan Of course, while all this was going on, I got a little more riled up than is normal. Let myself go, for just a wee bit. I s'ppose they'll be wanting an explination of some sort. Well, this'll be fun, I'm sure of it.

Dario "What the hell, man! You never told me about the giant lizard things!"