Donovan Alright, so. We get to the town, and the funny talking

Dario lad went up to Josef's house and started knocking on his door. It's like he thinks we're in some fancy court or palace or something. Besides, it's a shop. Why would a shop need someone to knock before they go in? Anyways, me and Josef get to discussing the finer qualities of this lizard hide that we picked up. Some of these scales will be quite beautiful after we've turned them into something useful.

Dario: Had Donovan not told us that we had arrived, I would never have thought that we were in Kumbaya. Having only two buildings, I'm amazed that it is on a map. Thad comments that the sign should read "Welcome to Kumbaya and Come Back Soon".

Nict: We arrived at the two building town under a light snow. It sounds like it should have been picturesque or at least, rustic, but in reality, it was just a disappointing shanty town at the end of a long, cold and wet journey through a swamp, but at least there was fire. The warmth filled me with vitality and hope from the misery I endured through the sleet filled marshes. Also, it seems frogs are a local delicacy. I have yet to try some, but Thad seems to enjoy them. I was just glad that there was anything other than the lizard stake we cooked on the path up here. Although edible the carcass (because I refuse to call it proper meat) was the most loathsome thing I had ever eaten... and I have eaten troll.

Sala's box and the amulet vision 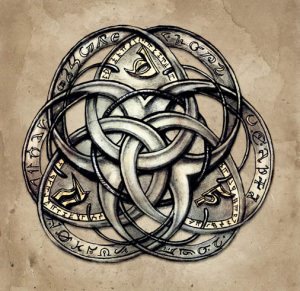 Donovan: The blasted swine of a lady, Zelda, made me give up some of the fine blue scales I had so I could treat poor Jeff's foot. Little guy's probably crying right now in the barn, knowing somehow that I had to give up something so beautiful to help him. It's worth it, though. I love that pig.

Dario: The herbalist woman Zelda seems nice enough and seems to be quite skilled at her craft. Thinking on recent battles I ask if she has a draught for bravery and she does, though Nict shakes his head profusely as the concoction smells like feet wrapped in poop. In trade for this and a few other draughts we repair her roof. I feel the hero, helping out the unfortunate elderly woman with a task that she can no longer tend to.

Nict: What to say of Zelda? The elderly herbalist seems to have a potion for every occasion. Although the one Dario thinks I should drink shall never pass these lips. From 10 paces, I caught of whiff of that horrid concoction & nearly fainted. I did not think I would find an odor worse than the lizard cooking. I, of course, was oh so very wrong. How does one mix the smells of burning dung & unbathed halfling? It is unknown to me, but she seems to have found a most effective method. But I digress... More important than the herbalist was what she held for Sala. She kept Sala's box with notes to where this "da-root" can be found. It also had something most peculiar: an amulet. Something I have never seen before, but my very blood draws me to. I feel within it the very essence of chaos and an all glorious fire. When Thaddeus lifted it, we shared a vision. A woman commanded the lizard men (similar to the ones we fought). She chanted with a staff in her hands as she had the lizard men set a cauldron of dreamdust aflame. What were you doing, oh beautiful priestess? I touched the amulet and that's when I knew of its perfection. Such power! And in its power it gave to me the ability to read the runes inscribed on it in a language that I later would find to be Ignin. "From Acule will come a Great Awakening. From Acule will come a Great Nation. From Acule will come a Great Victory."

Fighting our way out of the swamp 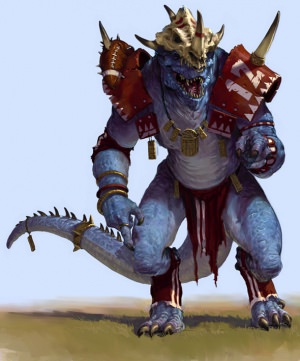 Donovan Apparently these, "Lizard Wizards", as

Dario keeps calling them, don't want us to get back to poor old Jeff. They attacked us while the rest of them slept, only blind lil' me and

Thaddeus were awake. That fire that they do, it isn't very nice. It burns like something else. Though, I guess it is fire, so that might explain the burning bit. At any rate, I had to let that weird tingley feeling I get sometimes help out. It was mighty helpful, but blast it all if I couldn't stop me swearing while we were a'fighting.

Dario: The first fight with these creatures was quite enough to convince me to stay out of their way, so when we get notice that a larger group is seeking us I don my armor and we hide. While hidden Tarralon hands me a vial and indicates that I should throw it. I trust him and do so, hitting one of the lizardmen walking on all fours. Tarralon had done likewise and the vials kill him with ice. The other lizardman walking on all fours bolts and the eight remaining lizard wizards begin looking for us in earnest. (It is quite amazing that we remained hidden.)

Outnumbered and obvious that we are going to die if discovered, Tarralon hands me another vial and indicates that I should throw it. Trusting him I do so and charge into the fray so my companions can remain hidden. The ensuing battle is long and tough and eventually it is obvious that we are going to die and I surrender. One of the beasts approaches me and Tarralon casts Magic Missile on it, declaring that it was going to kill me with magic. I grab my sword and cut it in half, realizing now that I am fighting to the death.

It is through sheer luck that we all survived.

Nict: Our trip back through that accursed swamp! I almost wished to stay in that backwater hovel than to trapeze through that gods forsaken wetland, but the only way out was through the wet & cold although the amulet lent me warmth. When we made fire and set watches. Four of the "Lizard Wizards" as Dario has coined them, came at us. To my surprise, I found I could understand them. They sought to surround us & they spoke of wanting an item from us. It could be anything, but I know it is my amulet they want. I would not, COULD NOT, let them get it so we fought and when we were able to survive the battle got what little rest we could before heading out.

The second leg of our journey back to Donovan's pig farm went without any event. But once again, we set up for the night & were again accosted by these Lizard Wizards. This time 8, but with two that walked like beasts although they seemed to have some intelligence. I vanished into the swamps to skirt around them thinking the others would follow, but the next thing I see is a small shard of silvery glass fly out and strike one of the squat four-legged lizards and freeze it. I shuddered at a death no creature should endure: a death without heat. Once I knew that our cover was blown I had no choice, I came out of hiding to strike at the enemy from their flank. I can take their fire magic, but they can take mine as well so I resorted to my trusty club to show them we were no force to be trifled with. In the midst of battle, Dario cried out that we should run. So again, I set out thinking the others behind me, but as I stopped & hid in the filthy marshes, I saw no one around me. I yelled in frustration, and ran back toward my comrades. I saw that 2 more had fallen, but the battle was still heavy so I came in swinging, & using my magic only when I could not reach these lizards. Finally, after beating lizard after lizard, we all fall wheezing for breath, but there is no time for breath. As soon as we are able, we are back up and running for fear of reinforcements...