Dario: After the encounter with the orcs we spend the next few days at Donovan's home so that Thad can recuperate. The orcs with the dragon tattoos are identified to work for the Brimstones, an organization that hasn't been seen in hundreds of years, not since this swamp became a swamp.

On their persons is a note instructing them to "provide Chloe Dunn with incentive that she will not refuse". This sounds like a threat to a damsel in distress but Tarrallon tells us that Chloe Dunn is an ancient name and she is to be long dead.

Nict: I was worried about Thad. He had it rough drooling on the ground unable to move because of the poison that coursed through his body. Luckily for him, our forces were up to the task of healing him up although it took several days.

As for myself, I spent the time learning to harness more of the fire that burns in my veins.

You have a fine bridge 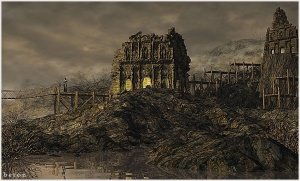 Dario: We continue to travel to the neutral village on the map and ahead we see smoke. As we get near we see a single humanoid pacing on the other end of a very long bridge. Behind is the ruin of a temple. We approach directly and discover that this is Chloe Dunn and apparently she, and the lizard wizards, are immortal.

She tells us about the history of Acule and how the king was a good man and wanted the best for his people. In his efforts to make Acule a utopia something went wrong. How could a process involving Dar root go wrong? The answer to that is that the nation is upended, literally, and sinks into the swamp. The lizard wizards are pushing hard to try and recreate the epic spell gone wrong in an effort to undo the destruction. They are lead by the priestess Medikara.

Nict: We travel to the "neutral" lizardmen labeled on the map although I'm weary as neutral sounds like finding one wolf instead of a pack, only a slight improvement.

We eventually come across a bridge that leads up to a temple that looks like it has seen better days. On the other side of the bridge is a woman. Right before we get there, she sends out a greenish orb away from the place, but it doesn't seem to be an attack so we ignore it. When we give our names, she says she knows mine. Curious, my family's caravan never came this far south as far as I remember, & I haven't done anything to earn a name this far into the swamp.

Anyway, the woman turns out to be Chloe Dunn the woman we heard about in the orc's missive. The rest of the place seems to be deserted.

We talk to her & she tells us a bit about the past of Acule & how it bacame Aculemortis. She also tells us that she is the Priestess of the First Temple of Homara, and that there are seven in total. Chloe is apparently the last hold-out against attempting the same ritual that turned Acule to Aculemortis. The other priestess' feel that redo-ing the ritual will undo all the damage done. I wonder if un-upsidedown-ing the swamp is going to have the desired effect. We warn her about the orcs, but she seems unfazed so we assume she knows what she's doing.

She agrees to train us on the ritual that is going to take place & charges us with trying to talk sense into the priestess Menecara whom she thinks is under the influence of Dinol Thong. When our training is done she teleports us through a beam of light... 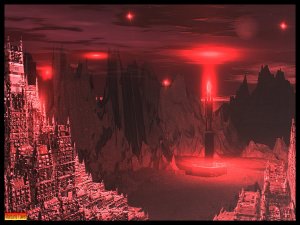 Dario: Chloe can transport us to the central temple by beams of light, but she tells us that all travel using this method is known to the priestesses. We arrange to "fall" out of the beam early and we hide in the mountains. We watch the lizards for a day and approach the tower during the day when they are the least active. The guards allow us to enter.

As we walk up a rounded walkway we encounter a blockade that we are not able to talk our way past. In the violence I hesitate and confirm that the lizard folk are evil. My conscious appeased, I attack with wild abandon.

Nict: It's a wild ride through the beam of light. Sorta fun. But in the end, we end up at the base of the mountain next to the tower. We hear the ritual beginning, & wonder if Chloe has changed her mind or run afoul of trouble because she claimed it took all seven priestesses to complete the ritual. Not a question for here though. We wait a day to find the lizardmen's daily pattern & sneak to the tower during their dormant time. We gain entry through Tarrolon's wit & begin up...

The orc's gear from the previous session yielded: