Fighting on the Tip of the Tower 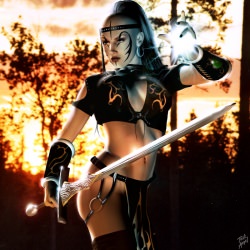 Dario: The top of the tower is filled with lizard wizards, chanting, bowing, and other such ritualistic goings-on. In the center of the dias is a large pit that opens to the flame of the earth, with a giant caldron suspended above it. Tarralon heads directly to Menekara, to talk her out of this madness. I leisurely walk the opposite direction around the circle, to make sure there are no surprises when we are attacked.

I see Dinalthon flying in the air. He appears to be up to something but before I can ask I notice that Donovan is slinging spells with Menekara. I quickly eye up Dinalthon and confirm that he is evil beyond measure, producing my bow. I funnel the power of Venal and all that is good through it, smiting Dinalthon with arrow after arrow. Dinalthon uses his magic to upend the cauldron, emptying the dream dust into a portal, obviously betraying Menekara.

At some point Menekara decided to bring the fight to me. I oblige by throwing her into the pit, where she was able to catch hold and hang on for dear life. I offer her life in exchange for the amulet, Nict's amulet, that she holds. She agrees and I pull her up. The amulet attempts to sway me with it's power but I am incorruptible.

Nict: We've finally made it to the top of the tower. It is a flat surface with a hole cut out of the center where the heat of the center of the world bubbles forth. Manekara chants & takes a slow route around the top of the tower. Lizard wizards sit around chanting with her. I take out the amulet, & its power courses through me as it did on our way up the tower. It attempts to brand me with its energies & I accept it. I feel the amulet burn its symbols into my chest & feel even more powerful. I When they see the amulet, the 3 guards that block our way part to let me through.

I try to talk to her as she makes her way around. Tarralon & I both tell her that this is a bad idea. This will not bring her people back to greatness. The ritual will only bring more ruination, but she ignores us & says that even Hamara will not stop her this time.

With her position known, Donovan curses her with a magic that makes her unable to speak in Ignan, & she begins to panic as magic begins to fracture the air. The lizard wizards try to compensate for her inability to continue her chant so my party decides to interrupt them... at sword point.

The 3 guards surround Donavan, & I move to help him, but am brought down. Luckily, Donovan heals me, but I find that Manekara has stolen the amulet! In a fit of rage, I touch the newly burned brand on my chest & attack 2 of the guards that surround Donovan & me with a spell. I find I use more than just the energies inside of me. I also use energy from the core of the world. The 2 lizard wizards stare in terror as they feel the pain of burning for the first time in their lives.

At this point, I see that Dario has subdued Manekara, & threatens to drop the Amulet of Homara into the core. I move to him & take the amulet back. He tells me that if it used against us again he will destroy it. I like Dario, but if he attempts this, I will kill him.

Donovan When we get to the top of the tower, all I can see are stars, blasted what my vision is. After going up the stairs, we are stopped by guards. I can hear drums banging and chanting, feel an immense heat coming from ahead, and smell something sickly and acrid in the air. It reminds me of someone ahead doing something with tar or pitch, out of my sight. Aside from the chanting, and the drums. There were never any of those when people where building.

The rest of the party says something to the guards in that garbled language of nonsense. They seem generally suprised that some of us can speak to them. After a few exchanges, Nict approaches, and they allow him through. Tarralon seizes the oppourtunity and slips through the gap. Good thing I have alredy devined him and Dario so as to keep track of them. Always running back and forth, in and out of my field of vision. Bah to it all, I say.

I try and stay close to Nict. Tarralon goes fast enough though that he becomes fuzzy and indistinct, and next time I can see him again he's swinging his sword on a heap on the ground, and I can feel that he's physically sick, like he'd taken a hit the the giblets. The person I think responsible, a woman of little clothes (not that I mind of course), seems to be in charge from what I can tell. Based on my assumption that she is, I allow the magic which has caused my life so much trouble to go to her as well. The inability to speak during such an important ritual may be helpful for us.

It seems to work, as the air starts to do something funny around her. This appears to be rather upsetting to everyone around, and things get mighty rough, mighty quick. I stay by Nict and do my best to heal him and myself. It wasn't looking so good. But, through my connection with Dario, I feel something change. Like a great, searing heat is close to destroying him, which I later find out it was, as he was pulling the woman out of the fire. When she surrenders, all these lizards around do likewise.

Dinalthon is denied his escape 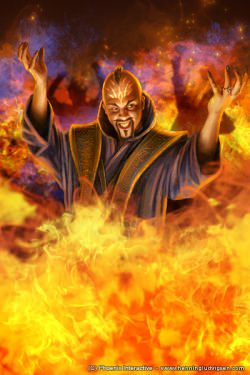 Dario: With Menekara defeated the lizard wizards bow down to me. Dinalthon is attempting an escape and everyone focuses our attention (and arrows) on him. We strike him repeatedly as he get farther and farther away. Finally, Thad and I have only two shots left. His misses. I draw on my inner nobility, remembering the power and greatness that I have and I draw the bowstring back.

My arrow finds it mark.

Dinalthon falls from his mount, to his death.

Nict: We see that Dinalthon is escaping! I shoot my fire at him & find it has no effect. So I fire again & again at the winged lizard mount he uses.

Eventually Dario takes a shot makes the wizard fall from his mount.

Manekara is broken up at the loss of the ritual. Tarralon & I both saw that Dinalthon had cheated the lizardfolk. He had made some kind of portal & stole the dreamdust that they were using. In light of this, I think she understands that truly we saved them from another backfiring from the ritual although she still seems deeply depressed.

Donovan: Oh but of course I'm such a decent fello'. Have to make sure these lizard-men who just tried to kill us don't die as well. Ah, but that'd do my Mother proud, so might as well be a nice chap, yeah? I let the rest of them worry about some bird-lizard while I keep them alright.