L:17 The Power of Thad Compels You—To Fall Out Of A Tree

Note: This was only a two hour(ish) session. 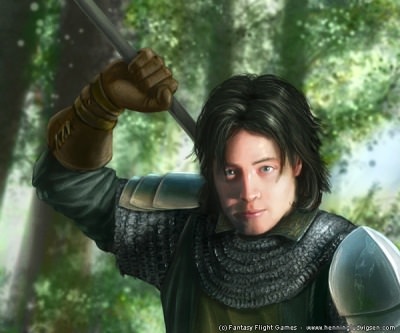 Nict: Our battle with the lizard wizards of Aculemortis swamp done, we set our eyes to the north. Lord Dunnay's request for us to check on Lord Salminay. It is the dead of winter so we should still have time.

We start north skirting the forest taking care after Thad starts noticing bear pit-traps. We continue our journey until suddenly 2 arrows seem to appear out of Thaddeus! Luckily, Thad is able to call upon the power of his god & compel the attacker out of the tree he attacked from. I can't help but feel a little sorry for the man as he lands with a sickening crunch on top of his arm, but that doesn't stop me from knocking his weapons away from him.

We set him on a splint & start to walk on pulling him in tow so we can question him. The next day, we find him feverish & talking incoherently. I check & find him to be poisoned from an old wound. We double our pace to the next town. Once there, we split the team up. We send Dario, Tarralon, & Donavan with the wounded man to the inn while Thad & I set off to find an apothecary. I use my power to create a mirage around Thad making him less hideously orc-ish & more hideously human-ish as the attacker seemed to have a special dis-like for orcs. I assume it's due to the tensions with orc attacks in the area.

When we find the apothecary, I knock on the door & am told to go away by a familiar voice. Zelda is in this town! I tell her we need medicine for a dying, poisoned man, & she asks if the cute one is here. I assume she means Dario and tell him, while not here, he is at the inn. I hear her rushing to the door, & when it opens, I am horrified. Barely dressed, she stands in front of me eager to find Dario. As much as I enjoy sending her to Dario, in the here and now, my eyes immediately tear up as what is seen can never be unseen. My only thought is if I had to suffer through this wretched visage so will Dario...

Thaddeus: After we finished taking care of the stuff at the big tower thing with the fire ritual and the lizard guys, I poked around and found some dream dust. Score. That will be useful. Then we tried to figure out where the one creepy guy fell after we shot him out of the sky. I found the spot alright, but I think he got healed up and his bird thingy flew off with him. Damn.

It didn't take us too long to wrap up the loose ends and decide where to go next. Off to Fort Johnston, to see about the traitor maybe. On our way there, I noticed some bear traps. They had been looked after recently, which is strange because it is winter and the bears like to sleep that off. And there were more than one. As I was thinking about what it could mean, some jackass in a tree shot me with a couple arrows - in the back! I immediately called upon the power of Toori and commanded him to drop. And drop he did. Even with a broken bone, he still had some fight in him. So I yelled at him and he stopped squirming.

My friends are good and looked after the injured man. Despite him attacking me unprovoked, they wanted him to live. It was discovered that he had been poisoned (not by me I swear!) so we set out to take him to the nearest city to get healed up. That city turned out to be an unfriendly racist armpit of a dump. I had to dress up like a human. I'll be glad when we leave.

Dario: I am eager for the world to know that Dario and his companions have, during the process of stopping a potentially devastating ritual that would have rocked the world, inadvertently discovered the true origin of the Aculemortis Swamp. Not as fine a story as kissing someone back to life, but still profound.

Next we decide to do our duty as citizens and seek out a potential traitor in Stultabon's midst at Fort Johnson.

Donovan: I deceided to go with them after the whole business with those lizards. After all, Jeff was turned into this delicious jerky. And I've got nothing better to do. Besides, someone has to take care of these fools. They'd be torn all to pieces if it wasn't for my help. Thaddeus gave me this great scythe for helping out, too. I don't mind the company all that much either. Tarralon always prattling on about how I can't grow potatoes in this damned swamp is like music to my ears, too. Yes, I'll stay with them a while longer.

There were bear traps on the road, after we left the swamp. Turns out that they're having orc problems around here. Also, that the natives are psycho. They shot my green friend here! No luck for the would-be killer though, as the bastard that shot Thaddeus fell out of his tree. We set his arm right, and the bugger passed out on us. Was like that for a few days. He was poisoned, and we had to lug his sorry ass all the way to the next town. We brought him inside the inn to get him help. The barmaid made a fuss something fierce. And there was a scream from outside. Wonder what happened there.