Nict: WHYYYYYYYY!?! What is seen, can not be unseen! Zelda stands before me in all her... glory, & I do my best to speak to her without looking at her for the sake of my sanity. She asks about Dario, & I tell her that he is at the inn. She sprints for the inn while Thad & I take a much more leisurely pace back. After receiving medical attention, Quentyn recovers over the evening.

The next morning, I alter Thad's appearance so as not to cause a commotion in town. As I go down to talk to Quentyn, he goes with Helena to worship their god of Justice. After almost an hour, I remember my spell will have faded. I run to the shrine room & find that Thad has already returned to his half-orc self, & Helena is with him. They seem to have come to an understanding about his nature.

Donovan: Turns out Nict saw Zelda. That's why he screamed. Understandable, that was my first reaction. But the oozing sore on her chest has gotten better. And her feet have gotten better. They smell much better. Less like rot, more like old people now. And for all her faults, she still a fine physician. She helped out with the archer-bastard that shot Thaddeus. After that business was done, we sat down and had a few drinks over Jeff. Sicked her on some lumberjacks that came in for breakfast. Good for a laugh. Oh, the archer? He was named Quentyn.

Turns out he's in charge of protecting the roads. Bloody good job he does of it, too. Shooting at us for no cause or reason other than our cloaks. Fool. But we agreed to help him out. He needs more people to protect the roads with him, and the only way he can get them is if we talk to his superiors. So off we go, trapezing through the woods, just to help some moron who tried to kill us just because. 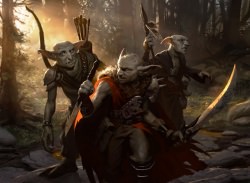 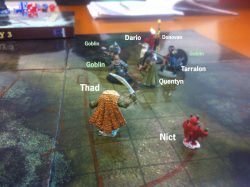 Nict: We travel north to Alpis & stop as we hear a scream. It turns out to be a goblin that has fallen from a tree... with the help of some arrows. We speak with the goblins who have attacked what we discover is one of their fellows, & it turns out hunting each other is part of a blood sport game they play. They also seem to be Quentyn's information source. They also seem to know more than they have been telling Quentyn. Most of us are uninterested in their games, but Dario is angered by the idea of blood sport so he hurries to stop it. I decide to help & bust up one of the goblins so they can't double team Dario. The goblin kicks me in my soft bits & runs away before I can retaliate with a club to the head. After that we decide to move on to Alpis.

Donovan: So, as we're walking through the woods, we run into these little green men. Goblins, is what they're called. And of course they were trying to kill each other. Damned things. To clarify, we didn't run into them, so much as one of them tried to fall on us after it was shot with an arrow by another one of the buggers. Being of small stature and weak mind, I had thought to try to fool them into not killing each other. Dario didn't take kindly to them killing each other for fun, and to be honest neither did I. But it didn't work, and they tried to kill each other once more. Damned things. Barely worth the time it took to talk to them. But I guess as spies for the Quentyn fellow, they were suppose to live.

Nict: In the city, we talk to the leader of the city watch. He doesn't seem to believe us even when we give proof of the orc threat. I tag along with Thad to keep him disguised, but when he retires to his room, I go back to the city & pray to Selene for safe travels, speak to travelers about how Colonel Major's & my family's caravans fare, & to find any information on our mysterious benefactor or the Lord of Fort Jonston...

Donovan: We get to this city, and the watch captain was being a bugger. We talked to him, and even tried to line his pockets just so he would help the little town we left behind. I don't think it did much luck. But we spent a few days here, and I found myself this beautiful horse. White mane, fast as the wind, sleak coat. And she looks like a beaute. I'll name her something majestic, soon as I can think of a good name for such a beast. Shadowfax was a horse of legend, but bugger to that. I'll name her Sophia, I think. Sounds like a good name for a horse.