L:7 Malyth Dies, We Bring Him Back 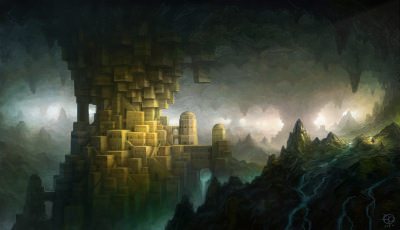 Dario: We have all finally regrouped and discovered that we are all inside some horrific beehive. Apparently Sala has a fear of bees. We spend time discussing our options and before we resolve the matter, Malyth begins warping the dream world around him in an attempt to teleport one of the watchers to us. This fails. Spectacularly.

Iridescian Spirits begin appearing left and right. One races away to where Tarralon has gone to hide. Since he isn't with the party I will have to work on protecting him later. My greatsword cuts through them like a sharp kinfe through apple pie but not before they drain the life from Malyth. In a cosmic sense, it is karma at work for his poor choice to use poison. His body rots as I cut my way to it and another Iridescian Spirit rises from the corpse. I cut it down and rush to help Tarralon.

Dario: This dream world allows us access to things far beyond our ken. As such Thaddeus calls upon the powers that be and bring Malyth back from the dead. He returns with an obsession to catalog his experiences and is physically deformed—his sword is bonded to his hand. While dead, Malyth spoke of a creature with a single eye, filled with horror.

Thaddeus: I am no pussy, but Malyth scares me sometimes.

Nap of Doom and A Frustrating Path

Dario: We conjure mounts in the form of bees and continue to follow the path laid out by Tarralon's magic. We eventually exit into a spooky forest. To lighten our spirits Tarralon regals us with stories that lighten our mood, if not our environment. We travel down the path for days which then turns into a week. We decide to nap.

Napping takes only a moment to rejuvenate the party but it comes with a price. The phantasmal killer that we seek haunts those dreams. Having stayed awake to serve as a guard, I slap everyone awake when trouble becomes evident.

Continuing our journey we grow bored and frustrated. When we finally give up we turn around and viola, a cavern entrance appears.

Nict: We took a nap... & I shall never do so in the dream realm again. We apparently each shared part of the others' dream. That wasn't the bad part. What was, was that the dream was of tentacled monster attacking us & a large bird attacking it. I did the first thing that came natural & when it came for me, I unleashed all the fire magic I could conjure in my terrified state...

Dario: The cavern entrance has a sculpture of an evil face above it and on the top of the hillside is a small glowing pool. Everyone but I wish to investigate it, so I stand guard with a bow pointed at the cave entrance. The other start calling out names to it and the pool becomes agitated and explodes, burning away the dream until all that remains is the cave entrance. We now only have one path.

Thaddeus: I dropped an arrow into that pool. I got it back out, and it had some purple stuff on the arrowhead. I don't know if it will be useful or not.

Nict: I tried to follow Thaddeus' example & dip my dagger in the pool. Unfortunately, I my timing was off & the pool disgorged into the sky as I tried & my dagger was flung away... I shall miss that dagger.