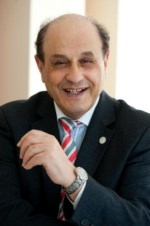 Brick: Hey, yo! We visit Brewed in the mornin' at our normal table. I sip my normal coffee instead of my normal Americano cuz I'm short on cash on account of that I have to pay James back. I'm payin' back slowly with my stipend cuz the school won't let their sports players get jobs. While James is talkin' about how his cards maxed out, I see some guy in a suit come in with six ninja chicks. The ninjas spread across the room. I hope there's not a fight. I saw Ninja Assassin. Ninjas are badass.

Luckily, no fight. The man talks to Abraham in the backroom & then leaves. Abraham then quickly puts up a flyer to the magic community that Aladdin is playin' Saturday in the park. Man, I love that flick. Robin Williams is hilarious.

James: Hanging out at Brewed, like usual. This funny lookin' bald dude walks in with some chicks in burkas. HE looks rich and powerful. THEY look like ninjas. He goes in back with Abraham, and they shut the door. They must have done some sort of magical warding as well - I sensed the enchantment but no further. Musta been important. They emerge later, the dude and his chicks leave, and Abraham posts an Aladdin movie flyer on the bulletin board. On blue paper. Paranet.

Sussing Out More Details About the Djinn

Brick: While the guys do some research about the Ginn, dude, I realize how weak I was against a magic monster, but holy stuff works good against that kind of monster so I decide to head down to Church... Before I go they tell me that the Jinn was Gassy al-righty.

I talk to the preacher at Church, & he says if I go regular, he'll bless my football! Cool! While I'm there I meet up with one of the chicks from the Djinn's photo. I find out that her name is Wenn Care & talk to her about Gassy. She tells me he's in the hospital & what room he's in & that he's only gettin' limited visitors. I get the guys together & tell them to meet up & "talk" to the geann.

All I can do besides that is buy some holy stuff, but all I can afford are some Testamints... On my way back to Brewed, I eat one...

James: So the tattooed guy is apparently a djinn. A real life genie. What in the actual fuck. We decide to head to the hospital to ask him some questions.

DM: The following was burnt into the tapestries in the living room:

Pillow Talk (Or How to Choke a Djinn)

Brick: I get Becca & Chang to take Wenn the Gift Shop as we get to his room. I'd like the first part of our conversation to be private. We find a man choking him with a pillow.

He threatens to use enough magic to hurt the machines here at the ICU if we keep him from leaving so we let him get to the elevators. I run down to the first floor, but he doesn't leave the elevator. Damn, he probably got off on a different floor.

James: We went to the hospital and found where the djinn, Gazi, is recovering from the injuries sustained from Brick's flying Segway. We walk in, and some dude is trying to suffocate him! It's Tim Wang, one of the ceiling-ninja assailants from the Deep Blue assault. I remember him, as he's one of the two I framed for causing the damage after I put the security guard to sleep that day. I sic Brick on him, but he plays a trump card. Threatening to magically shut down all the life-saving machines in the ICU with magic? Fucking asshole. So we back down. Of course. And he gets away. FOR NOW...