James: I get an invitation to war by Lord Mekka. The Esteamed League vs. Carpe Noctem. Time to make sure my colander helmet and nerf gun are up to spec. Lord Mekka wants to take advantage of a rules loophole in order to take over the LARP crap in the area. Okay, whatever. We decide to help.

Brick: Hey, yo! Looks like it's time to pay up. Lord Mekka's sayin' it's time to help send away the vampire dress-up nerds & reclaim their hall. Gotta say, I'd be for Lord Mekka anyway. The steampunks make it sound like the vamps stole the space in the first place. Bad nerds!

We go to meet up & talk strategy with the Esteamed League at Kim's place. When we get there, the place is full of nerds talkin' 'bout the upcoming game although I hear some argument about Star Battles vs. Star Track or something. It get's pretty heated... for a nerd fight.

Kim shows us around, & I can't help but notice she has a room chalk full of Twilight shit. I mean posters, dolls, the whole shibang. My creepy meter gets pegged for a second. One of us asks her why she's got so much vamp stuff. I mean, the vamps are the bag guys right, & she tells us that we can all get along. I'm startin' to think she's a hippie.

We finally get a chance to talk to Lord Mecca, & he tells us that they're gonna use some sorta rules mess-up to take charge of the both groups. It sounds fishy but the others seem to know what they're doing so I just nod my head & agree to do it. Hell, I may get to play that rock-paper-scissors game against two groups & show how bad ass I am! 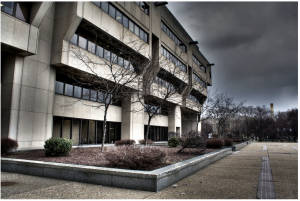 James: So we go to Posvar Hall. I speak with the Twilight-wannabes, and we start up the LARPing. Then I call a meeting, invoke the "no confidence" loophole, and help install Lord Mekka as the supreme king motherfucker or whatever. Then all hell breaks loose.

Brick: I go with James to tell them we're joinin' up for the night, & they agree 'cuz the new rules say they have to, but the boss vamp seems pretty smart. He seems like he knows what the plan is. After we deliver the message, we get sent out to play the game. We're huntin' robots & were-wolves. Sounds fun! Before we get too far in though, Ilke says she has to hit the can so he stand guard as she "freshens up".

Ilke: I knew there was something weird about the way Kim was behaving, but I wasn't really in the mood for an interrogation and I had a game to get back to, so I decided to let it go. The first thing I saw when I came back into the hallway was Brick being trampled by an actual Werewolf, and Chang coming towards us looking like... a mecha-vampire? I didn't take me long to piece together what was happening - every player around us seemed to be taking on the characteristics of their chosen characters.

I didn't have much more time to guess why this was happening - the werewolves had clearly lost their senses and were out for blood. As a group, we've managed to hold our own in combat before but this time... we barely seemed to get away with our lives. Within minutes, we were all badly injured, and the wolves were lying on conscious, but still alive... as far as we could tell.

It was only after the fight that it dawned on us that none of us had transformed. I did, however, take note of the fact that Chang must have been involved in some kind of double agent activity to be taking on both vampire and mecha traits. This would be something to take up with Lord Mecha later - or whatever he's become...

James: Yeah, these fake LARPer werewolves turn into REAL werewolves somehow. And attack. God, they hit hard. I'm pretty sure I went down for the count at one point. My friends and I manage to stomp them down. Chang appeared during the battle, sporting some vampiric AND steam-powered enhancements. Fuckin' lunatic.

Brick: When Ilke gets out 3 "were-wolves" come out like their gonna challenge us. I'm up for a game. As I get ready to play, they really attack us! One's a cute, little brunette so I don't wanna take her down, but her 2 buds are dudes so I decide smashin' on them first is my best option. I start fightin' one of the guys as the other goes for Ilke. As we're gettin' the advantage, they turn into real were-wolves. I mean, real half-human, half-wolf friggin' were-wolves! I trip up the wolf & then knock out my guy with a flurry of blows as the brunette goes after James. The brunette comes at me as James helps Ilke deal with the other guy.

At this point Chang shows up... With upgrades! He's got a real steampunk suit on, & has a net gun he's fires out to help trap the wolf that's attackin' James now. He sorta helps, but somethings different about him. He's... sorta glittery. When he passes the sun through a window, it hurts him, & he runs... The vamps got 'im.

I get back to my fight with the brunette were-wolf. Man, I hate to beat up on a cutey like her (well before she became a dog), but I don't really got many options. I grab her & try to talk to her, but she gets out of my grip. It looks like diplomacy is dead so I kick her until she's down for the count...

James: We slink around this normal-building-turned-medieval-environment, and come across some more signs of grisly battles. When inspecting a particularly gruesome scene, involving piles of bodies with their arms removed and missing, I see something that stops my heart. THE CHICK WITH THE PURPLE STREAK IN HER HAIR IS HERE! And is an Esteamed League member. So goddamned hot. I don't remember much after that, I was pretty smitten. Something about investigating further, and maybe garlic bagels. Probably for Brick.

Brick: We look for clues around the building & when we get close to one of the snack shops in the building we hear people running & as they're comin' around I see they're vampires. They raise their hands & say somethin' level 5 and start disappearin'. I throw my arm out in the direction one was runnin' & I feel a pressure in my arm as he gets close-lined. He mumbles something & runs on... Well, they can't teleport, just become invisible. Cool trick though.

We see what she was runnin' from as we turn the corner to the bagel shop. A familiar lookin' chick with a purple streak in her hair has her steam gun up & has scared away the vamps. Man, where have I seen her before... Oh, it's the chick who usually gets my Cafe Americano. Man, she went all out with her costume. I notice James seems to be a little smitten with her so after we tell her who we are I ask her to do some first aid on James. Since we're here I get a garlic bagel. It'll help keep the vamps away, right? Also, I talk to her about her outfit. She says that it changed to a real outfit from a costume. Man, I'm startin' to feel seriously gypped that mine didn't change. I wanted my nerf gun to become a cool steam gun, too!

She then shows us some grizzly shit. There is a room where they've killed a bunch of negatrons & were-wolves & have... I don't know, it looks like they're harvestin' limbs or somethin'.

Discovering Dirk and the Back Way to Doom 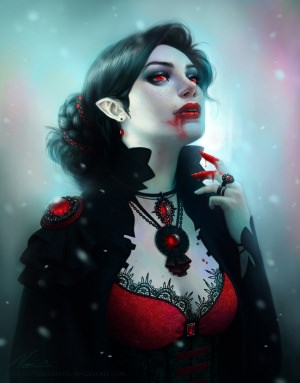 James: As we creep down the halls towards the starting area, I see a vamp-LARPer who is trying to hide and failing. I rush up to him to prevent him from turning invisible and running away. I want some answers.

Too bad Dirk Hide can't hide. Also too bad he doesn't know shit. Blah. So we let him run away.

Brick: We find this dude in a vamp outfit as we ride the escalator up while we're explorin' with Astra Stark (the coffee show lady). He stands there holdin' 2 fingers up like that's doin' anything. We go corner him, & he tells us he has no idea what's goin' on either, but that he was trying to hide. We send him off with Astra to keep them safe, although I think Astra's BA enough to handle herself.

We go & find the room that was supposed to be the steampunk groups headquarters & hear voices on the inside. They're discussin' sacrifices & shit & how they like bein' vampires. We discuss our options, & I wanna go in & take these guys out. We're apparently a little too loud as the brunette vamp chick opens the door before we can make a surprise attack. She's got a couple guys in there with her. They're vamps too. They say they'll let us go if we give up a limb. I look at Ilke & know that's just dumb so I bum's rush her, but my hearts not in it. Man, why's it always cute brunette's I gotta fight? As I grapple with her, the other take out her minions & help me take down the chick.

Brick: We eventually get to the front entry way, and we see Kim cryin' on the ground, & Chang lordin' over the nerds from both the vamp & steampunk side. I sigh, cuz it looks like Chang is playin' his own angle again and I'm gonna have to knock some sense into him.