The room is cramped and dank, lit by a single lantern, and everyone is gathered around a solitary sitting figure. “I know that these changes to the plan are last minute, but they allow us to take out a powerful ally of the Royal Pride while still being able to set our target free…”
The door to the room slams open and a hulking Wildblood rages, “How dare you! I just got word that our rider and one of our Sorcier have been sent on a fool’s errand. You have crossed me for the last time. You, are going back to Condrol. Immediately.”
The seated man drums the two fingers, his only two fingers on that hand, on the table. “I got different plans Tawaporah.” A gun shot cries out and Tawaporah’s body slumps to the floor, a pool of blood forming around his head. 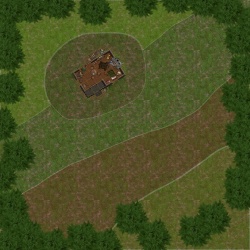 🐘 One-Tusk
Everything goes wrong. I can only assume we were trailed here- someone's in the loop on the investigation, and given the small number of people in that loop, it shouldn't be too hard to find the leak. Or maybe there isn't a leak- maybe someone just knows to keep a tail on us. I wouldn't know how to spot them if there was. I don't fucking know, at this point.
Worse, they come in numbers and get the drop on us. It's a shitfight. We're surrounded, and Morncey's killing field makes retreat a dicey proposition. I "build" us a back exit, and then start worrying about the wildblooded rhino-of-war. A creature like that is hard to control, and I hope that if we can break their heavy cavalry, it'll break their morale (a strategy that's worked well against the sorcier in the past, and doubly so when they used enslaved wildbloods who were ready to turn against their masters for the cause).
It's been a long time since I've tried to run a battlefield operation, and… it doesn't go well. The last thing I remember is getting gored by the rhino. After that… blackness.

💃 Milady Rosalie: Well, this is an awful mess. It looks like my innate nullification powers disabled most of the alarms. This let some people sneak up on us. I'm not exactly sure who they are, or why they are after us. All that maters is that they are violent, and it seems like they have ties to the Sorcier.

Very quickly, the building is on fire. It is a magical fire, though, so I expand my powers to put out the magical parts and only leave the smoldering natural flames left in their wake. One Tusk is able to put out what is left through the nausea that the use of the powers cause, and the others were able to put sights on the Sorcier in the woods that was lobbing the fireballs.

There was a rhino wildblood that was feral-minded that posed the worst of the problems. He broke through the house and was a very effective siege engine. I took a hard hit, and my hand got mangled. I don't think anything is broken, but the swelling is really bad and there was a good bit of blood. This could have easily been a lot worse. One Tusk took the brunt once again.

We killed the rhino rider, and the sniper troupe was easy to scare off. The rhino was a bit simple, and we were at least able to subdue it as you would a beast of burden. Morncey was safe in the end, which was the most important thing. We just have to get Boner to get us out of here safely.

🐺 Ildefons: With a loud magical boom, and another, and another, it's like we're at the harbor all over again with Sorcier blasting. That's a heck of a lot of power for a lone man in the woods who was only rumored to have any access to powers at all. The old man was surprised, apparently having had a network of alarms and traps that aren't working (probably because of Rosalie).

Clearing a way out (which is our only goal at this point) was challenging, as we first had to locate and eliminate the biggest threat: The Sorcier tossing the covering blasts. Oroitz is able to circle overhead and spot them, diving down at them so Ehsan could drive them away with her arrows. Artillery gone, Rosalie neutralizes their lingering magic (a process that knocks us all on our butts) and OneTusk gets to work putting out the fires they caused, hurting his pride in the process.

Now that we find ourselves in a much better position than we were just moments before, we peek outside ourselves face-to-face with a twin volley of musketeers. Rosalie and Ehsan keep the troops distracted, while OneTusk postures to go head-to-head with their commander, riding atop a giant rhinocedine wildblood. I direct Oroitz to distract and annoy the commander while we pack up to go; Oroitz flies in and manages to pick his holdster of his pistol!

Things are looking dire for us, as we're trapped by gunfire, going to be charged by the rhinocerous any time, and our shelter is crumbling around us. One Tusk's ally Fern is desperately trying to find Morency's paperwork while the rest of us are making a fighting retreat to the cart that Boner is pulling. The rhino and commander rush, and the majority of us are taken out, or on the verge of passing out.

Then, in the blink of an eye, things change. Somehow, someone -- I believe it might have been Rosalie -- managed to get the musketeers to turn tail and flee. A few strokes of amazing luck on our part (a lucky thrust from me, and a lucky rapid bonding of Ehsan and the rhino), we are able to subdue the commander and his mount. We survived, managed to keep Morancey alive, and, somehow didn't lose anyone despite being desperately outnumbered and outgunned.

The old man does not think he is welcome back into the city, and opts to remain here, in the rubble that was his home. He suggests, without any reasons given, who he suspects of being the turncoat: Lemuel, or Odelon Pandis.

🏹 Ehsan: It seems we were followed to Old Man Morency's home, or at the very least we have wonderful timing for ambushes. Not long after we arrive to talk with the old man a force of what are likely aggressive Sorcier being an attack on the home. There are several loud explosions as the house is swiftly caught up in a magical pyre which knock loose the many stacks of notes and books that litter the floor. Morency is taken out though still alive but the priority is dealing with this fire. I manage to spot movement in the trees from where I believe the source of the blasts came from and loose some arrows while Rosalie and OneTusk deal with suppressing the currently raging flames. No more blasts come towards us so that threat has been dealt with.

Outside we're being charged by two groups of musketeers along with their captain who rides a rather formidable looking rhinoceros. I concentrate my fire on a group of the firing line as my companions attempt to distract the mounted captain. The rhinoceros charges forward and bursts through the house, causing extreme damage to my companions. Lucky for me I was outside and able to keep up the fire on the other Sorcier.

While things were looking their most dire we were able to turn the tables and push back the entire assault, all while retrieving the papers we came for and keeping Morency alive. I even managed to calm the rhinoceros out of it's rage and it seems willing to work with us for the time being. It was unfortunate that OneTusk suffered injury during the battle, however Ildefons says that he'll make a full recovery given enough time.