RPM:10 And That's Why You Get A Work Order

The only light in the dark room is the moonlight that comes in through the narrow window slits of the tower prison cell, illuminating a small table and casting two figures in shadow. One of them reaches out, pushing a small figurine forward on a checkered board.
“My knight has his hands full with your approaching pawns,” the other person says, gesturing at a collection of the many small pieces gathering around the knight, “but fortunately I hold more allies in reserve.” With a quick movement a small robed figurine is moved forward and across, knocking over several of the pawns.
“I will admit that it is a bit stereotypical of me to favor the Magus in our game, but then, you are playing a game of kings with Renoir Olivier, the disposed leader of the Sorcier.”
The other figure speaks softly for a moment.
“Don’t say that too loud friend. That time is coming again but let us not give it away before the time is right,” Renior says as he moves the knight piece forward taking out the last of the four pawns.

Looking for a Pattern in the Logs

💃 Milady Rosalie: After the thief was captures, my sights were on Iosif's secret room and who was going in there to reset the traps. The logs had little information in them, but Lemuel confirmed for us that some pages were ripped from the ledger.

The pages are nowhere to be found, so we decided to keep this between those in the inner circle. We will take voluntary deck duty and keep an eye on who comes and goes to try and fill in the blanks of people that are suspicious or not.

🐺 Ildefons Lemuel and I spent a good amount of time with the books. We found a 5 day visit pattern in the missing pages. After a lot of collation and searching, Lemuel recalled that he had signed in Old Man Morency a few times, and none of these pages are present. That seemed like as good a lead as any.

Morency, he's one of the few retired Lions, was the first actually. He was old when the group was founded and retired 7 years ago, after a scandal indicated that he may have had connections to the Sorcier. We have no indication of his relations, if any, with Iosef though.

DM: A band of warriors from Kirkush are seen "on screen" leaving a ship in the docks. This is likely going to complicate Ehsan's life.

💃 Milady Rosalie: I arrived a bit later than the rest and came in to a bit of chaos. It looks like some Lions got orders to move things, Ehsan has some soldiers thrown in a cell for some reason, One Tusk looks like he jumped on a small bomb, and Ildefons was nowhere to be found at the time.

By all accounts, there appears to be a falsified work order that the Lion's were acting on. We are not sure where they came from, but they claim they are from Captain Hernaut himself. This doesn't sound right, and there is only one way to get to the bottom of this.

🐘 One-Tusk: Observing a system can alter that system- so the real trick is observing without being observed observing. That's my goal, in any case. While Ehsan watches the front desk, I set up a work crew just outside of Iosef's office. I was worried I might need to sandbag things, but as it turns out, the damage I did to the cells was more than enough to delay the process. While I'm there, a pair of Lions enter Iosef's office, and start moving things out.

They aren't supposed to be doing this, but I'm not supposed to know they're not supposed to be doing this. I don't have any authority over them. So I stall them. I delay them. I ask to see their work order (they have an authorization, but not an actual work order). I send them down to Ehsan for confirmation. I quiz them about where they're taking things- secure storage, they claim- and decide that I need to see this for myself. So I do what I shouldn't have done, by policy: I help them move Iosef's desk.

A desk which was booby trapped with explosives, not too dissimilar from Iosef's vault. Many valuable documents are destroyed.

🏹 Ehsan: To think that even during out first day of handling a simple watch at the prison could go just so wrong? But really in situations like this it's always better to at least expect the worst, I suppose it was just it's suddenness that caught us off guard. My in familiarity with the paper work standards here is partially to blame no doubt, but also I believe it was all of our skepticism surrounding the entire situation. It did not quite help so much that both myself and OneTusk are not formal members of the Pride and possibly feared taking this a step too far when the provided work order could have indeed been completely legitimate. The situation is intensely frustrating of course, I feel as if I might explode just even thinking about those two 'idiot' guardsmen. I'm sure the both of them were chosen for this ill gotten task simply because of their pretension to gross incompetence.

If this situation leads to anything, it will be improvements to their security systems regarding orders dolled out to subordinates at least. Something needs to be done in this regard to make sure this does not happen again.

Regardless now, documents have been destroyed in the fire and my sudden detainment of those fools may prove a hassle in the future. But with the prison now no longer much of an urgent concern, it seems that we must make a journey to visit Morency, that retired pride member we discovered to be absent from the log books.

🐺 Ildefons As the 5 day cycle is about up, we decide to tend the books ourselves. For two days we don't get anything... but then Armel and Lambert, the regular screw-ups who shot Ehsan and maliciously interpreted my orders, show up with a supposed note that they are to clean out Iosef's office. I don't catch a lot of what's going on, but am later informed that One Tusk did a good job at sticking by and playing screen. We get their order checked out (it does).

They tried to remove Iosef's desk, which triggered an explosion of a trap we had never found. Everything that was inside it was removed. OneTusk and I check out where they were delivering things after removal, and it seemed to be on the up-and-up (except they didn't lock the door). I talk the rest of my trigger-happy group into letting Armel and Lambert go, upstairs to the clinic, after we've checked that half of their story. They said they just got the work order as a note in their mailbox. The date seems to be suspicious.

We reset the trap inside, just in case. 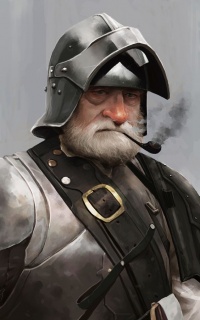 DM Daryl declared a story detail, an upcoming Sorcier raid that they're going to use as a false flag operation to try and out a spy.

💃 Milady Rosalie: The best way to determine what is going on is to have a meeting with Captain Hernaut himself. He does confirm there was a work order, but he made it for well after we could have done our job of exploring the secret room. It sounds like there is a spy among the administration or their staff. There are currently no leads, so we are going to have to try to find a way to flush them out. It's a bit risky, but it could be our only way to find out.

🐺 Ildefons Beyond what Rosalie said, we made plans with Hernaut to try to stage some leaks in low-order (but still important) Sorcier raids to try to narrow down or find the source of the leak. We tell him about our lead with Morency.

💃 Milady Rosalie: We eventually find that Iosif had a visitor from long ago; the first Lion to take a forced retirement, Morency. He is quite aged, and I'm surprised he kept contact after the bad blood between him and the Lions. It took a bit of work, but we were able to find his home. It is well in the backwoods, but not too long a trip.

We make our way out and I detect some magical traps across the ground. My natural anti-magic aura shuts them down, but he is still alerted to our presence. He comes out with an ancient longarm and levels it against us. I am able to talk him down by mentioning Iosif and we are eventually led inside. He has the old logs that he ripped, which will show us if anyone else that we can suspect was present. We don't have long, though, before some purple balls of fire blast through the walls. My anti-magic field took down too many of the alarms they were able to get the jump on us. Whoever they are, they don't seem too keen on keeping prisoners.

🐘 One-Tusk: Rosalie puts two-and-two together, identifying Morency as the visitor. We go to confront him, and sure enough, he's been tampering with the logs- but not to conceal his presence, as much as to find out who's the mole. Unfortunately, it seems that we were either followed, or have impeccable timing, because we're attacked!

🏹 Ehsan: Morency has taken to the countryside for his retirement. It's somewhat out of the way, but not difficult to find. His house is situated in a clearing in a forested area, no doubt to keep his sightlines clear to keep an eye out for intruders. This assumption is correct, of course, because as soon as we step foot on his land a number of dogs start to bark and the old man himself has us in the sights of his rather large rifle. We manage to talk him down and he invites us into his home. We were correct in him being the one resetting the traps in Iosif's office after his death, but not long into our conversation shots are fired on us. I kept an eye on the roads to ensure we weren't followed so instead it looks as if this attack has been planned.

🐺 Ildefons After speaking with Hernaut, we go to visit the loose end that Lemuel suggested, Old Man Morency out near Chirp. Long story short, Orion knew he was likely the guy -- he knew Morency and Iosef were friends (the former having sponsored the latter's admission) and had sent him a courier with the death announcement. I had sensed magic in the area, and Rosalie probed to disarm some of it. I guess the rumors were true. This explains Orion's strange request for our investigation: he wanted to ease up on Morency's need to visit.