🐺 Ildefons: "OneTusk. As your friend and your physician, you need to mate. No, I'm not saying you need to settle down and have a family, just find a mate. Look! Haven't you noticed you've been irritable? *wipes hankie on OneTusk's temple* See and smell this ick? Now get laid. You're a danger to yourself and those around you until that happens."

🐘 One-Tusk: "I will perform a manual override." I mean, I've got stuff to do. I'll look for an opportunity, but finding a suitable mate… even in Lisway, that's not going to be easy.

I'm honestly in a good mood, all things aside. A walk through the city reinforces for me that I am doing a good thing.

🏹 Ehsan: I can feel the alcohol beginning to soak into my system and decide to head home for the night, but a restful sleep is impossible. Instead I make my way to the training grounds at the Royal Pride headquarters. Physical excursion should help me ease my thoughts - it has in the past at least.

After practicing with my bow and sparring against the mannequins, another member of the Pride joins me on the field. It turns out to be Armel, the incompetent fool who shot me in Zephyrine's cell. Seems he's a bit of an insomniac and comes out to exhaust his body. He offers to train away from me, but sparing against an opponent is more physically taxing and so we fight one another. I admit I let my emotions get a hold of me more than I should have and laid him out more roughly than I should have. He leaves angry, though he tries to hide it. No doubt this too will bite me in the ass. I wonder sometimes why I choose to remain her despite all of those that seem to hate me, but then I remember what drove me away from home originally.

Back in the revolution, Hernaut, Rosalie, Iosif, Archibald, and Kuthmaer were charged with figuring out how to kill the Sorcier’s dragon. As there is only one recorded dragon death, how to do this is, and remains unknown. Having exhausted all other routes, they decided to steal rare texts from the library of one of the most powerful mages, High Sorcier Alfred Le Roux. The ensuing conflict cost Archibald his hand and cost the Sorcier his life.

The rare texts were the same ones that decades ago the High Sorcier Alfred had used to greatly expand the magic of the Sorcier through improved use of violent magic. Much of the books were dedicated to the subject.

After recovering from the shock of the loss of his hand, Archibald spent more than a month researching options when he finally landed on a solution. With the right ritual and volunteers to fuel the spell they could end the life of the Dragon by switching its spirit with another.

During what would turn out to be the winning battle for the revolution, Hernaut, Rosalie, Iosif, Archibald, and Kuthmaer, accompanied by a contingent, risked everything to end the Dragon and win the Revolution.

The heat of the battle make the details fuzzy, but for as long as Rosalie lives she will remember the blinding flash of light when Kuthmaer’s spirit and that of the Dragon switched. The Dragon’s body slumped to the ground, Kuthmaer’s human spirit insufficient for the Dragon’s body. Meanwhile the Dragon’s spirit, stuck in Kuthmaer’s body, raged and clawed at his new body. Weakened from the ritual’s drain, no one was able to stop the newly human opponent from rushing madly out of the den.

In the next several years, Archibald determined that the magic that switched the bodies was temporary in the long term. The spell is fueled by those who participated. With Iosif’s death, Archibald has confirmed that the remainder of the Dragon Locks bear more of the spell’s burden.

Currently Archibald, Hernaut, and Rosalie are working out options, trying to find a way to fuel the spell with more volunteers, if such a thing is even possible.

It doesn't seem like very long ago we had an uneasy peace here. It's starting to feel like that again. I'm sure it's a fair bit brighter for most despite the unease the city is feeling, but the past just feels tarnished to me. I've lost so much. Someone recently said to me that I have a death wish. May I do, but just don't realize it. Having such a stern face wears on the soul.

Breakfast with a Side of Earthquake

💃 Milady Rosalie: This wasn't natural. Ildefons is down, and hard this time. This must be some major magic to cause such a quake. The others run off while I take a moment to look after Ildefons while our medic looks after him. I get the all-clear and run off to see if Hernaut has some insight.

🐘 One-Tusk: My irritation has been piqued ever since Ildefons brought up the musth, and it's entirely possible that my reaction to the earthquake reflects that. I rushed from the Pride HQ to overlook the city and assess the damage. An earthquake, especially after cooking fires have been started for the day, poses a serious fire hazard, and in the compact confines of the city walls, even a minor earthquake could turn into a major disaster.

It is fortunate, then, that there's no real damage- except to Ildefons.

🏹 Ehsan: I get no sleep and find the others having breakfast at the Head Quarters. I keep it to just tea but it's not long until the building rocks with an earthquake, not something I'm unfamiliar with but still shocking while it's happening. Ildefons goes down with a scream and passes out. Once the quaking stops I go to retrieve a medic for treatment. After we see he is fine, One Tusk and I head to the prison to ensure there is no structural damage to the cells.

We arrive and find the prison to be well in control, however Iosif's office is smoking. The traps have gone off in the secret office and while One Tusk goes to start a bucket line I attempt to put out some of the fire but end up making the damn thing worse. Damn these gunpower contraptions, I'll never work my head around them! Thankfully One Tusk arrives shortly after with much needed water and stifles the flames enough to save some of the documents. We should have cleared this office out days ago.

💃 Milady Rosalie: Hernaut has no idea what is going on. He isn't forthcoming about his affliction either. Either way, this isn't the time for that. We confirm that the two suspects are Lemuel and Odilon.

The subject of Ildefons comes up and how the magical earthquake knocked him out. Hernaut worries that he may be a Sorcier or an unregistered magician. He doesn't seem to radiate magic, so it is something a little deeper.

It hit me then, but I didn't want to verbalize it. There is enough suspicion and chaos without bringing up dead gods. It does make sense, though. there are stories of the old gods creating offspring before being wiped out during the Zodiac War. The 12 bestial gods of yore. They say descendants had divine sparks that were like magic, but were something a little different. It may be likely he is one of the so-many-greats-grandchildren of such a person. It's a little ridiculous, but the possibility is there.

💃 Milady Rosalie: I gave a cold silent stare while the rest of the team went to work. He is loyal to his cause, and we are lucky his cause is the Pride. He was hard to crack, but he admitted to covering for the captain who was having secret meetings. This solves the mystery of his name appearing so much, and confirms that Odilon is the person of interest we need. 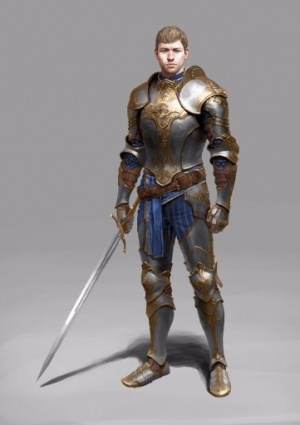 💃 Milady Rosalie: Isabeau has quite the reputation. Some say hers revels mine, though hers is well deserved. Regaurdless, she must have some idea of where her son is.

It looks like she is covering for him. Her story was shaky and full of holes. I even presented a false lead that she followed. Her standing makes her pretty untouchable, but it does give me a landing platform for future confrontation with her when the time comes.

🐘 One-Tusk: Our target is at the Seamstress Union. Given the conversation I had with Ildefons earlier, I am… well. Ahem. At least the labor is organized and working for their own benefit, as opposed to the benefit of a pimp. Unfortunately, I haven't got time to dawdle- I might return.

🏹 Ehsan: We find the Odilon is laying low at the Seamstresses Union, which I quickly find out that it is not quite what it seems. The realization is not shocking but the union is a front for a brothel. When I enquire with the madame about Odilon (not in an obvious fashion of course, I did not want to arouse suspicion) her demeanor quickly flips from welcoming to hostile. I wonder if she is covering for him, but that thought is interrupted when when gunfire is heard from outside. The madame splits from me to begin arming herself and I use this opportunity to search for Odilon.

The noise forces the man out of one of the curtained rooms and spots me, making a mad dash for the outside. We enter into a chase, something I had not done for a while. It is thrilling and makes me yearn for the run of the walls and rooftops of home. It's not long before the man is cornered. I manage to take him down with an arrow through the leg while he almost shot Sameen! I swear I'd kill the bastard if we didn't have to take him alive...but it seems that maybe this will happen after all. Though it won't be by my own hands. Ildefons has challenged Odilon to a duel. The prospect is frustrating as he will walk free if he is the victor but it will be satisfying if he looses.

💃 Milady Rosalie: Looks like Odilon is hiding at the local Seamstress Union, also known as the largest cathouse in town. Everyone know this. Well, everyone except for Ehsan. She burst in before anyone can tell her otherwise. We feel it best to let her deal with things herself. In the least, it may teach her a lesson.

While waiting outside, two thugs approach us. They are more well-to-do than the usual riffraff, as noticeable by the fine jackets that covered the even more well crafted pistols they had aimed at us. One Tusk tries to intervene, but they fire before he can. They were nearly hits, knocking Ildefans and myself off balance.

They thugs are soon dealt with and we find that there is a rooftop chase talking place with Odilon. I use some false call sighs to make him think he is surrounded. It worked well, though I can no keep pace with someone as spry as him.

The chase ended in a shootout between Ehsan and Odilon. An arrow pinned him to the ground while he almost hit her horse. It's rare to see such a fire in her eyes.

Slighted, Ildefans challenges Odilon to a duel. As this is for the honor of the Pride, I second it.