RPM:17 A Bear Took My Money

🐘 One-Tusk: Look, I'm just glad to be off the boat. We've got a large pile of land to cross, but managing a march I can do.

🏹 Ehsan: We finally reach land, and yet still this creature seems fit to keep traveling with us. Not all of my companions seem so weary of it like myself, so I will make sure to not let this thing get behind our backs.

🐺 Ildefons: We disembark and bid our farewells to Hernault, Grigori and the others. I suspect it's not the last time we'll be seeing them. Hernault is a talented man, and the Red Wolf Brigade surely will want to utilize his knowledge of Arkstone, despite is exile. We decide to have Layle come with us to explore the world. We're also interested in learning his story.

Layle completely unawares of "land". His world apparently is entirely aquatic. He's not sure of it, but he copes. 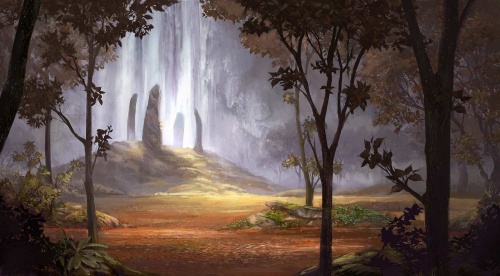 🐘 One-Tusk: Ruins, yep. Various folks in the party are intrigued, but we're not exactly here to sight-see. And, as a matter of fact- a bear decides to make trouble for us. A big goddamn bear. It is very dangerous, and could at-ack at any moment. We must deal wit it.

🏹 Ehsan: While the creature goes for a swim, a large bear happens upon us. Not wanting to harm it, I try to disuade the bear from coming further by loosing a few arrows around it's paws. It does little...though Rosalie (seemingly having gone insane on the ship) decides to temp the bear away with a sack of coin....which works....and steals her money.

I'm not entirely sure what this means but a good story will definitely be made of it.

🐺 Ildefons: During our travels to lead Wishdreamer and Scalehard to their destination, we come across a fascinating ruin with a nearby waterfall. Layle needs to freshen-up and takes a dip in the fall pool while the rest of us check things out. I commune with the terrain, doing as Florint helped me to learn and opening up my sensitivity rather than closing it off. The ointment he created is a useful focus for me to remember the process.

I reach out and catch a glimpse of everything in the vicinity, but, in doing so, I tugged on everyone's life forces. Which pissed of a pretty big bear. Rosalie, of all people, was able to scare it off with some loud jingling of coins, her raucous demeanor, and a solid whack on the nose.

The coast clear, we discover that the runes are covered in Untari runes. There's not a lot to be gleaned from it, other than it's a history of a subsistence tribe suggesting to "be one with the forest".

🐘 One-Tusk: Now, we encounter the Walleri well off their normal migration paths, and this is a group that… well, there's valuable cross-cultural sharing that can happen here. Their collective spirit is remarkable, but it comes at the expense of individual identity. They could spread the Revolution, but need to understand the value of individuals. This is doubly true in the case of disease AND hunters.

The Walleri are being hunted. They plan to sacrifice a segment of their herd so that the rest can get away. Not on my watch. I teach some of the Walleri to fight. It's a hard fought, and expensive victory- but it is a victory.

Mostly. My tampering drove a schism into the herd- their collective is broken in two. I'm not certain how I feel about that.

🏹 Ehsan: The Walleri are an interesting group of....creatures I suppose. They are fascinated by Sameen. It never fails to surprise me just how little horses there are off our continent. I count my blessings no one has tried to steal her from me. Though truthfully if someone even thought about such a thing I'd likely kill them on the spot.

As we travel Ildefons sees to a few members of the herd who have been afflicted with a strange disease. He suggests a quarantine, which is only sensible, though the Walleri seem almost offended at the suggestion.

Strange, tall hunters fall upon us during our trek. The herd stampedes to collect their numbers which makes movement on horseback a bit difficult. Thankfully I manage to see a pattern and can get out of the circle to start firing back at the hunters. Their arrows are tipped with a strange substance and after the fight ends I take one to examine later. They are fletched with extreme finesse and arrow head are deadly sharp considering they're made of stone. The techniques here may help me better my arrow making in the future.

🐺 Ildefons: My companions' journals omitted one important detail: We were exposed to the strange, magical?, wasting disease. I hope we are able to keep it from coming to bear on us. It seemed to wash away, which I taught Walleri to do. But there may be lasting effects. Layle was able to call upon some blessed water to help us during this fray, though I'm not sure exactly to what end.