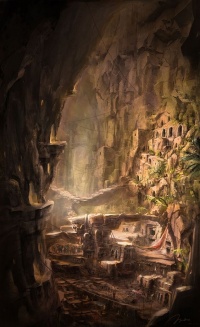 🐘 One-Tusk: Leaning Bear Hollow is a new settlement within the ruins of an ancient one, built largely along revolutionary lines. It's a home for Wildbloods, and its remoteness is its own source of safety.

🐘 One-Tusk: Kenoi seems like a good, intelligent sort, well meaning. We have some spirited debates- we don't see eye to eye on… well, many things, but we can talk through them like adults. I worry that there is a bit of a cult-of-personality- the town draws its name from him, he leads the town, and so on- but shepherding the proletariat through the revolution requires a strong personality. I don't want to meddle.

🐘 One-Tusk: Based on Kenoi's advice, we go to the Leaning Beer Tavern. The food is good, if limited. The drink… the same. Mushrooms are the staple crop here, and thus everything contains some amount of it.

🐘 One-Tusk: It is not all Wildbloods here. There are also some Tamebloods, and one in specific is Ernestine Rose, a warrior whose wife has been taken by Sorcier- Sorcier who are in hiding in these lands. Well, we know what to do about that, now don't we?

🏹 Ehsan: Some humans do seem to reside here. A rather nice looking woman by the name of Ernestine stopped into the tavern we were dining at to do a food pickup. Ildefons and One Tusk try something to "set me up" a bit with her, but they apparently did not notice the ring she wears about her neck. Likely a wedding band and so any interest that was there faded as fast as it was founded. Regardless she did reveal herself to be a smith residing in town and Sameen does need new shoes made.

Ildefons and I go to speak with her while One Tusk has a meeting with Leaning Bear about...something...and during our chat she also shares with us that she is a member of the Royal Pride. Some kind of covert mission rooting out something of a town of sorcier. Our arrival with the money from Arkstone seemed to have set some things in motion and her wife went off on her own to track the threat, something they should have waited on ideally. We agree to help and grab One Tusk before heading out for a rescue mission.

Assault on the Sorcier Village 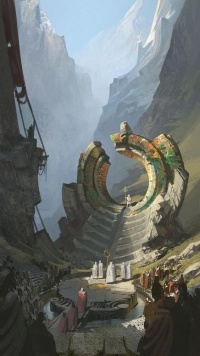 🐘 One-Tusk: We come upon the sorcier in the middle of a ritual. Their leader is a salt-mage, who pulls a salt-golem from the Earth. I charge (obviously). There are corpse flowers raining their stench on us. It's all a bit of a mess, and it gets fuzzy as I let my rage take over.

🏹 Ehsan: The Sorcier had something planned for Earnestine's wife, likely some kind of blood sacrifice as when my arrows killed their leaders a giant golem of salt rose from a kind of summoning circle. I'm not familiar with how this practice is done but my arrows were proving useless against it. As much as I hated to even place my hands on the thing, the standard issue pistol given to all Royal Pride members had to be used to slay this thing. Some well placed shots caused the creature to fall, but my hands are shaking from the strange power of the device. I will have to seek more lessons with this when we eventually return to Arkstone.