RPM:5 End of the Line

At Milady Rosalie’s request, Ildefons has spent the morning criss-crossing the inner city to call in a series of favors on her behalf, so that Hugo might receive a quick option for bail. This effort bore fruit, as Judge Girardot gladly signed the paperwork, setting Hugo’s bond at 1000 gold dragons, which was agreed to be covered by Milady Rosalie.
And as Ildefons approaches the Garrison of the Pride, which rests above La Magie De Prison, warning bells clang from the towers, announcing a prison break to those who know the code of the bells.
Ildefons is met by the fresh-faced scribe, Lemuel, with a note from Rosalie that reads, “Prison break for Zephyrine by the Sorcier. See that Hugo is safe then find us.”

Pinned Down by Gunfire in a Long Hallway

Zephyrine (as Ehsan): Back in the prison again. Hopefully I can break free of these people soon to get to my daughter. My best moment will be when everyone is distracted, likely when we get towards my cell where Ehsan currently is. I'll need to get to her first to place a glamour to ensure she passes as myself for at least a moment, just long enough for me to get away.

🐘 One-Tusk: The smell of spent powder and spilled blood brings the memories roaring back. I feel the musst upon me and it's so easy to channel it into an aura of confidence. These two idiot kids see it, see my size, and follow me into the fight… and die. The memories keep roaring back, but it's Ehsan that surprises me most- by summoning a spider? There isn't time to think. I press on.

"Zephyrine" is Shot in Her Cell

Zephyrine (as Ehsan): Who knew some idiot guardsmen would actually proove themselves useful in this situation. Ehsan has been shot, under the orders to kill on sight. Why they thought "I" would be a danger completely locked away in a cell who knows, but it allows me the moment I need to place my illusion. While the one Wildblood argues with the guards and the other goes to tend to her wounds, I make my break under the idea that I will be retrieving my weapons from the locker. The Sorcier are close and I don't know how far I'll get. Hopefully I'll be quick enough.

🏹 Ehsan: Those idiot guardsmen! They wouldn't even allow me to get a single word out before putting their gun through the bars and taking a shot at me. Thank the dragons their aim was complete shit. I'm able to get away with a non-lethal gut shot. I back myself under the cot for cover and compress the wound as best I can to stop the bleeding.

Not long after there's a commotion outside. I recognize the voices as One Tusk, Ildefons, and surprisingly my own. It seems that Zephyrine has come back, though somehow I doubt that was her decision. I don't see her for very long, but the illusion she cast on herself to look like me is...eerily convincing. With the wave of her hand she placed an illusion on me. I can't tell of what but I'm sure it was to make me look like Zephyrine. She leaves to retrieve my weapons. I doubt that is what she is actually doing. More likely trying to get away from this completely ridiculous situation.

Ildefons enters not long after to treat my wound and he sees through the illusion fairly easily (no doubt due to the close proximity). He seems...disappointed. No doubt believing me to be the reason for Zephyrine's escape, and while he would be correct I don't ever plan on letting anyone know what actually happened in this cell.

🐘 One-Tusk: The spider makes sense quickly, as we once again discover that Ehsan has acted unilaterally- and foolishly. I want to be furious with her, but I'm more furious with myself right now.

🐘 One-Tusk: We chase the attackers, and the story begins to make both more and less sense. Samrook came to break Zephyrine out. Ehsan already had. Zephyrine doesn't want to go with Samrook, he has other ideas. All this blood for a game of pawns. I'm shot, I'm bleeding, I'm furious and sad and hurt. He has my tusk. I give into the musst, and in my fury, try to disarm him with my own wound. It succeeds as well as you might imagine… not at all. 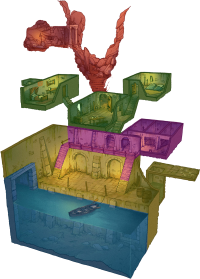 🏹 Ehsan: My wound is treated as best it can and my weapons are with me again. I make my way towards the commotion and come across what looks to be a secret door. I'm familiar with them but this is not my palace and my first thoughts lead to a door still stuck shut. I don't have much time for fooling around with trying to open the door normally, so take out one of my small explosive arrows and jam it near the mechanism. The lock is blown and the door opens wide enough for me to pull it open. It won't close again, but a hidden passage in a jail is something that likely shouldn't exist regardless.

There's sounds of a struggle lower down and I can barely make out Zephyrine's voice. Despite my instinct to rush in, I take the path slow in hopes of taking whoever is holding her by surprise. I'm sure they're aware of my presence due to my more direct entrance, but I can at least try to take them unawares or while they're more preoccupied. My hesitance proved to pay off as not long after One Tusk and Ildefons come up behind me. I use them as suitable distraction to make my way further down the passage, taking care of some of the thugs on the way. We manage to break Zephyrine out of her hold and the man takes to one of the boats to make his escape. He may have gotten away but at least we stopped him from taking Zephyrine to who knows where.

🐘 One-Tusk: These counter-revolutionaries were prepared, and know the terrain (and our weaknesses) better than I do. We still deny them their prize.

A Deal with Zephyrine to Renounce the Sorcier

DM: The circus caravan that agreed to take them away was Assem Shamoon’s Bazaar Jamboree

🏹 Ehsan: A deal is worked out with Zephyrine. She will publicly renounce the Sorcier directly before her equally public execution provided we can give her family a way out of the city. I was hoping we could avoid the execution, especially after her story about her rather unfortunate involvement with the Sorcier. It leaves a bad taste in my mouth knowing that she was truly a double agent working for the Royal Pride while her own daughter was being used as blackmail to force her into working for the Sorcier...but I suppose there's nothing that can be done now. I know of a man currently in the city who can whisk them away to my homeland. Assem will give them their cover and I hand a letter to Zephyrine's mother to secure her safety within Kirkush. It is the least I can do considering these circumstances.

🐘 One-Tusk: I respect that Zephyrine is prepared to die for the revolution. I hope the best for her family.

The Execution of Zephyrine

Several days later is the military-style funeral for the war hero of revolution, Iosif Kettleblack. The fields in the garrison have been done over with party tents, tables, and filled to the brim with people for the funeral and wake. In the center of the field, next to the guillotine, rests the wrapped body of Iosif. Now that the city’s many dignitaries have had their word, Captain Hernaut stands.
“I served the people of Arkstone beside Iosif during the revolution and consider him a dear friend. He wasn’t one to “put a rosy shine on words”, as he would say, so I’ll keep this simple, you’ll be missed bon ami.
And with that, Captain Hernaut takes the ceremonial torch and lights the pyre, which erupts in flames. As everyone starts to dissolve into the wake, Captain Hernaut grabs a bottle of wine and is followed inside by Rosalie and several other “old timers”. Once in Hernaut’s locked office, one old man with one good hand opens the wine while Hernaut opens his drawer and pulls out a small wooden chest the size of a brick. “I managed to find it in his office,” Hernaut says as he flips the lid open, shining a green light on his face, “there are now only five of us left to stop it”.
Rosalie lifts her glass, “A problem that I’m already working on”, she says as she calmly sips her wine.