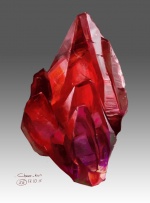 🐺 Ildefons: Stanimir Koslov claims to serve Belatrov of Popov, bearer of the great gem being shown here during the festival -- which, he claims, has been stolen. The thief (list of pseudonyms given) is rumored to be here. How he came to that conclusion, he gave no evidence. After attempting to buffalo his way in (like OneTusk's cousin, a bufflokin, would), we calm him down, bring reason to him, and invite him in once he realized this party is an actual state affair. He comes in with but a token, unloaded, guards and is invited into the garden where we can work out the details.

I'm distracted by checking on our "guards", something's amiss with them, and miss the discussions with him. I'm hoping that our two hot-heads don't blow the top. (Later, I hear, they did get into a little bit of a scuffle before Rosalie stepped in with her tongue.)

I discover some of the guards acting, well, like hyenas prowling a carcass where the lion still lurks. I break it up, but notice one of them is armed. I, in a movement as graceful as one of Berta's dives, I get the gun out of his hand, away from the small of my back, and knock the guy good. Sadly, the gun went flying under one older lady's hoop dress, where I couldn't get it. Hopefully it will remain lost on the dance floor. I drag the man out, inform him of his newly-discovered unemployment, and toss him to the Popovian soldiers, after informing them of what a scoundrel he is.

I saw Ehsan left the discussions early, and she rushed across the ballroom to the rickety tower, with murder in her eyes. She gets a message to me about the Irene Darchee woman being the suspect of the jewel theft, and that Ehsan had earlier sent her to the tower; she continues on her way. I return to the door, inform the soldiers of this news and suggest they surround the tower to catch anyone who flees -- that Stanimir is on the hunt inside -- and that the person I tossed out earlier is likely an accomplice. The others join her a few minutes later in the tower, before I'm able get across the room to join as well.

I skewer a "turncoat guard" on the way to join back up with the raucous ruckus in the tower, only to find my way blocked by a pile of debris. (I'm later told one of the turncoat guards was a double-turncoat, for the Sorcier to get the gem.) While others clear the debris, I find a window and whistle for Oroitz to join me. The rest of us catch up with Irene just as she is surrendering.

(During this time, OneTusk has been dealing with a gunshot in the ball room. All our guests remained safe and uninjured, but he managed to keep things calm and orderly.)

Rosalie and I, escorted by Stanimir, meet the Papovian lady and return the gem to her directly.

🐘 One-Tusk: Things are tense with the Brigade, and I'm ready to shove a cannonball up Koslov's ass, but cooler-heads prevail. Someone stole a gem from Koslov's decadent noble, and we're supposed to care. He wants to search for the thief. I want to see him try and walk after he's folded into quarters. He gets to search- under strict guard, of course.

Eventually, I've had my fill. While we're in the garden, Koslov says yet another counter-revolutionary slight against our newborn egalitarian state, and I just have to pop him one in the face. That's about where things get chaotic…

💃 Milady Rosalie I don't like when things happen that I'm not aware of. Someone is lose in here with a weapon, and I don't know what angle they are playing. There is also a commotion going on outside, and I can only guess that One Tusk is there making things worse.

My insight is astounding, as I saw Captain Koslov from the kingdom of Erthil here. Lady Belatrova Popov is a visiting dignitary here, so it's not hard to imagine that he would be far behind. I keep my distance, trying to stay out of things until the last possible moment.

I am lucky as I get to him just in time to stop a fight. I lure him off of the main group to try and get his story. There is a thief that stole a stone, the Tashnogen. He has reason to believe the thief is here. I assure him after letting down my ruse that I will do all I can to help him. The rest of the party... ehhh... they are a wild card.

We go to the abandoned part of the building to avoid prying eyes. It is lucky for us that the thief is currently here and it looks like Ehsan found her (or fell into another honeypot). It wasn't long before the Lions pounced on their pray, trapping her in a sub level floor where she couldn't escape.

Minimal violence and injuries. No diplomatic fences that can't be mended with a bottle of wine. Possible new ally? Overall, this has gone better than expected.

🏹 Ehsan: Captain Koslov's sudden arrival to the estate has the potential to be...extremely disruptive to say the least. We manage to calm the man down to discuss matters inside to get a better sense of the situation. Regardless of what they're here for, allowing a retinue of mercenaries into a party with hundreds of the more well to do members of the city is just begging for trouble. I am more suspicious of Irene's presence now but for the moment I'm keeping myself open to all sides of this situation.

In the garden Koslov shares with us that he is searching for a woman who's stolen the Blue-Violet Tashnogen, which is the property of his employer the Lady Belitrova Popov. My suspicions are rising but if this woman is the thief he claims her to be she has likely been preparing for this occasion. A fight between One Tusk and Koslov nearly breaks out but manages to be diffused thanks to Rosalie. I break away from the group to go inform Ildefons of the situation and to try and have members of the Brigade surround the wing of the Estate under construction before making my way there myself.

Irene is found very suspiciously moving more easily through the wing than one who should be unfamiliar with the estate. It isn't long before she has me cornered by some of her helpers, but I manage to avoid being taken down outright. While dealing with them she manages to slip away, being tailed by one of the helpers in pursuit of the gem. It doesn't take very long but we manage to corner her as well. Surrounded on all sides, she surrenders at least somewhat peacefully though continues to spout off more lies to try and ease her situation. There are too many witnesses however, she won't get off that easily.

DM Information about the scenario

Captain Stanimir Koslov
Not on my watch, Serves Lady Belitrova Popov, Bear form solves everything
Skill cap +2
Stunts (2) — Shapeshifting (Bear only) and Skill-Shifting [+2 to a skill]

Irène Darche
Jewelry Thief, Stealthy, Always has a backup plan
Started with the following created aspects: Cased the Joint [ ] [ ], Bribed the Guards [ ]
Skill cap +2
Stunts (3) — +2 to Cleverly Create Advantage, +2 to Sneakily Defend, and Did you just hit a woman? The first time that she takes physical stress from an opponent in a scene they get a 2 point mild consequence, e.g. Abuser

Thugs
No aspects
Fighting, hiding, running +2; Everything else +0
One hit minions