Brick: Hey, yo! We found out where

Guy got the Catstar record from. It's a little hole-in-the-wall place called Paul's Records. It looked like

Experimenting with the Quat Star Bracelet

James: This bracelet has to be key to the weirdness. Maybe some sort of mind control. We spent some time today trying out a few different experiments. I don't totally get it yet, but it's certainly tied to the music. And powerful. Dangerous powerful.

Brick: Ever since going to the record store, Thomas has been actin' jittery. We even found him tryin' to lift James' wallet. Not cool, man! Anyway, we discover that the bracelet that came pre-packaged with the Catstar special record version was what was givin' people the power to control others. We decide to test it out, & I get chosen to use it! I try it out by trying to get people to do things that they normally wouldn't do. I got James to clean his bed. Yeah, fun stuff...

James: The record store dude was using the effects of the bracelet to make people buy his stuff? Lame! I had to put an end to that shit. Scissors, meet mystical bracelet. Sorry bro, had to be done.

Brick: When I get back to the frat house, there's a tv van up front & some loud black lady tellin' me that they're gonna have a garage sale with all our stuff to help clean the place up. Well, I guess we have been told the place is a human hazard so I grab my prize football & Robin Williams and get out of there so they don't get sold. I give the crew permission to sell anything else though... 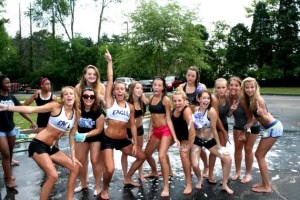 James: Man, whoever that one cheerleader chick is, she seems to really have it out for LaShaniquah! Helluva tackle! I could swear I've seen her before somewhere...

Brick: I heard something about needing industrial strength cleaners & stronger equipment from the crew. Luckily, the Everyday Discounts are there to help. Since a lot of the cheerleaders hang out, they decided to have a car wash to help pay for the new cleaning stuff we'll need.

When I get back there with the guys, the one cheerleader that came with us goes crazy on Lashaniqua! I see that Lashaniqua's got a bracelet & she tells the other cheerleader to go away. I use my bracelet's power to try to get her to give me hers, but that doesn't work so I suggest that the cheerleader that's with us (man, what's her name again? Bella, Beatrice, Becky... eh, I can't remember) to keep fighting. There's water sprayin' everywhere, & cheerleaders in bikinis & the fight's sorta hot, but our girl seems to be losin' so I use the bracelet to get another cheerleader to try to take the bracelet. In the fight, the bracelet snaps & the power seems to leak out of it so we stop the fight.

Plus side, hot chick fight in bikinis AND we made enough to clean up the place! Minus side, the guys tell me we should make some web posts on how to make the bracelets so the power goes away. I'm not exactly sure how it works, but they tell me to give back bracelet so I say okay.

Conclusion of the Storyline

Sweeps Week (Usable Once): In order to get viewership up on the show the network will grant a +3 bonus to any task that is done in a provocative manner (based on GM discretion).