Checking In On A Sick Becca

James: Hanging out at Brewed, Conan the Librarian comes in, looking dapper. He asks where Becca's been. He has a good point, I hadn't heard from her in a couple days. Unusual. So we check it out. No answers to calls or texts. Brick is mega-worried, way more than is called for at this point. A fruitless visit to the dorm and a near break-in by the overanxious jock later, we head to her granny's place. She's there, but "sick". More like comatose. I see her necklace is radiating magic so I remove it. She wakes up. Cool.

Brick: So me & James are kickin' it at Brewed, & all o' the sudden, Conan comes in. He asks us if we know everything was okay with Becca. Man, I knew it was too quiet lately! I hope she's not dying!

James & I finish our coffees on the bus as we head to Becca's folk's place. We try knockin' on the door, but no dice. I climb in a tree to get a look inside, but I don't see nothin'. This little old neighbor lady comes out & tells us that she might be with her grandma... & not to climb trees, 'cuz it looks bad. I thank her & we head to Becca's meemaw's place.

Becca's meemaw let's us see her, but she's a sleep. I use my Mime's Eye like Kingsley's been teachin' me, & I see that her necklace is like a Green Lantern battery giving her power, but it's also takin' energy. James must be seein' the same thing, 'cuz he agrees that we need to take it off her. Next second, she's awake again. We talk & Becca's meemaw makes us some matzaball soup. 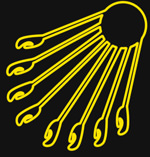 James: So apparently the Carnegie museum has some Egyptian exhibits for a few more days. We check it out, as there might be a tie to Becca's necklace shenanigans. We find a piece there with the Egypt chickenscratch on it that looks like her jewelry. Something to do with Aten, looks like chains or a sun or something. It seems to put off a bit of magical residue. How very intriguing.

Brick: We try to research Becca's necklace, but my searches on mythical stuff only takes me to a smurf site. Interestingly enough, smurfs are 3 apples tall.

Becca looks into her necklace & finds that it's from ancient Egypt! And a lucky coincident is that there is an Egyption exhibit in town!

Carnegie Museum: The Light and Love of Akhenaten & Nefertiti 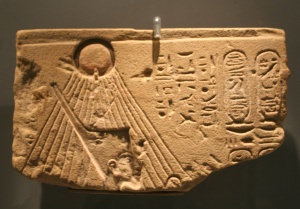 Brick is hilarious. He distills an entire ancient culture's elegant communications attempts down to hamburgers and tits. I love this guy.

Brick: We go to the museum & check out the Egypt exhibit. It's pretty cool. Lots of rocks. They have one of those big stone coffins. I was almost expectin' one of those mummies to come out of it. They also had this statue of this chick. The guide told us that the chick's name was Nefertittys. She ruled with Akenothin. It got a little boring after that so I quit payin' attention to the tour. We came to one tablet, & it had a lot of squiggles on it. James was tellin' me it's how they wrote back then. Well, that's dumb. Why would they make a tablet that said "knife, hamburger, boob"? Was it an ancient strip club with a buffet? Anyway, Becca seems to find what she's lookin' for so we head out. 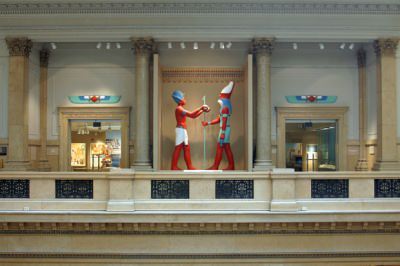 James: It seems that

Becca's grandma not only cooks a mean brisket, but is also somewhat knowledgeable about magic. She was aware of Becca's gifts to some extent. And also, someone in her family donated a bunch of the stuff there at the museum. Now she wants to send us to some weird place to do god knows what. Hell, I'm up for an adventure. It's been a quiet week, other than the fact that my personal demon requested an iPod Touch (I should be glad it wasn't a new iPad). So yeah, with a belly full of cheap cooking wine - let's do this shit!

Brick: Meemaw sets us up with a private viewing of the exhibit, 'cuz she's got connections. She's been donatin' to the place for ages! She pulls me aside and asks me what's goin' on with Becca, & I try to make somethin' up but I'm no good at that kinda stuff. So she tells me to tell the truth so I explain about the necklace & Becca's magic. I'm surprised that Becca's meemaw knew about that stuff already! When meemaw talks to Becca about it, she gives me the stink-eye...

We go back to meemaw's place & she makes us a brisket & explains that somethin' was tryin' to use the necklace to get at Becca! She "cleans" the necklace, but says they might be able to try again so we need to stop it...