Brew:44 Snowbody Knows What is Going on

Isaac
Guest Starring: Popeye, Sharon Kingsley (on the phone with Becca)
Challenge: Snowstorm that hurts some of the cast and figuring out why
Location: Cathedral of Learning, Brewed Awakening
Date Played: 20 June 2015 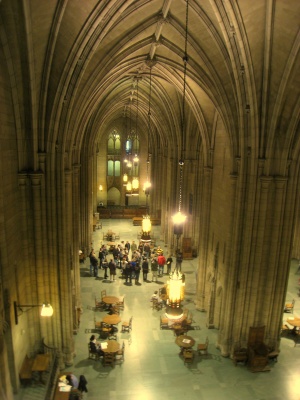 Reba: I hate snow. I hate cold. And now I have another flipping reason to hate the winter here in Allegheny. Burning, painful snow that nobody else notices. What gives? Thank Bondye for coffee.

I show up to Spanish study group and Becca had a dead faerie in her purse. It was so cute. And dead. She had to hit the road for some extra-curricular thing (Because doing magic isn't extra-curricular enough for her?). I tried talking with James in private, but then one of the new guys from study group is a telepath and he blew our cover. The Irish chick has got faerie connections (Who would have thought?), so she might help us get the little woman to proper rest.

Isaac: Spanish study group seems like a good idea since I need this credit to go on the dig in Argentina, but things get weird almost immediately. Reba comes in claiming she was burned by the snow (acid snow? frost bite?) I go to check it out with Becca because there's got to be a logical explanation for this. The snow feels fine to me, but Becca reacts like she's just touched a hot stove.

We head back inside and I "overhear" James and Reba talking about the dead faerie in her backpack and speculating about supernatural causes. I get a little overwhelmed by the sudden intensity of the thoughts swirling around, and I blurt out that I know about the faerie. They suggest we move the conversation to this coffee house called Brewed Awakening.

Innogen: It seems that it is required to study a foreign language while in college. Let’s just say when I asked if they had classes in Irish, Sidhe or Welsh, I got a ton of questions about Swaziland and a suggestion to take Spanish. At very least I can use this opportunity to meet some nice normal people and not be surround by craziness for once.

After a short while in Spanish two thing become apparent 1) Spanish is entirely different than any of the languages that I know 2) There is a thing called a study group, to help in these situations. Thankfully, when I showed up at the study group, after practice, the group seems relatively normal. Sadly, that maybe the worst misjudgment I have made since I got here. Almost immediately , some of them come in talking about the snow burning and most of them run off to check it out. I stayed behind ostensibly to study Spanish but mostly to look up what the deal with Swaziland was. It seems the Student Chancellor thought I had said Swazi instead of Sidhe. Seems you can take the girl out of Arcadia but not the Arcadia out of the girl.

Popeye's Pizza and the Bathroom Explosion

Miranda: All I wanted was to finish study group quickly so I could move on to more important matters, like checking in on some of my favorite campus rodents. Instead, I got pulled into some kind of supernatural investigation with some of Becca's friends. She probably thinks I'll make a mistake and embarrass myself, but I won't give her the satisfaction. I'll prove that I can be as smart and useful as the rest of them.

It all started with an explosion coming from the men's room. For some reason, Innogen's first instinct was to run inside (gross!), but I didn't want to be left behind, so I followed. Inside, James was passed out on the floor, surrounded by pizza and empty beer bottles. Like any good first responder, I conducted a thorough examination and determined that he wasn't hurt.

At some point, somebody texted somebody (I can never follow these things) and we ended up in some kind of magic coffee shop, where Reba was doing what I'm pretty sure was a seance. I tried to help, but Becca kept ruining everything. And then everyone kept saying I was a werewolf! She probably started that too…

Innogen: The next thing I know there’s an explosion down the hall! Now this is interesting! I run down the hall Miranda following close behind. Ha! she seemed like a nerdy type but even she was bored with this“Spanish”. Down the hall smoke is rolling out of one of the bathrooms of course I run into see what’s going on. Miranda asks me if we should be going in there and points out that it’s for men. Mental note: Separate bathrooms are important here. Humans are so odd.

Rounding the corner we find a guy passed out on the floor with some beer and pizza (normal?) and a broken wand (abnormal?). So much for my nice relaxing time. Why do humans have to keep playing with things they can’t possibly understand? I’d give anything to not know anything about it.Then I realized I had to get the wand before Miranda saw it. It was simple enough; she was more concerned with our study partner. (James I think his name was). Soon enough the wand was secured and we were back at the study table. James wanted his wand back and didn’t want to talk about it till later; good enough for me. Maybe I can keep him from killing himself.

Next thing I know the team of snow researchers return and pull James over to whisper about something? (Are these guys a coven? Just my luck!) It least Miranda and the quiet guy are normal. THEY HAVE A DEAD FAIRY! Yelled the quiet guy. So much for normal a bare minimum he has an over active imagination and some really weird Tourettes. Needless to say even a random accusation like this needs some investigation. Indeed they do have a dead fairy! Not only that it’s one of my sister’s friends! She was always rude to me as children but she didn’t deserve this. It seems it was the snow they were talking about earlier. I don’t really want to get involved with anymore court stuff but they were carrying her around in some sort of haversack and they had mentioned something about a freezer! Savages! I’ve got to at least get her rites taken care of and figure out why this happened so it doesn’t happen again. When does my service to the court end?

Becca gets a call at the WUP Newspaper Offices

Reba: Becca sent me a text about a lecture by some disgusting racist confederate couyon who Sharon Kingsley thinks someone might try to off with magic. As much as I hate that guys face face, Bondye generally frowns on the whole grievous injury thing. I would have just made him a little misery (Jinx his microphone to make him sound like a squirrel?). Finding out who's trying to do him in will have to take a backseat to the murdery snow, though.

Reba: Between James getting sick, the dead fairy, and the murder snow I thought we should pass by Brewed Awakening to do research and make some magic in privacy. I'm suspicious of Miranda. She's got this whole animal affinity thing going on and she smells like a few skipped showers. Totally a were-something. I bet Isaac knows, he's all thought-read-y.

We got to Brewed mostly in one piece and got into the backroom. I called up the powers that be and did some dog-hair voodoo to try to figure out what about the storm was giving us so much hell.

I couldn't get who was responsible for this mess, but they were powerful. The snow storm was caused by some incompletely charged weapon designed to kill off anything magical in Allegheny, and it was connected to the egg we sold to Fe. I am so kicking myself for that now.

Isaac: I had no idea this place existed. I'm totally going to have to spend some time with the library here--maybe I can finally find some answers on this damn dinosaur bone that I can't get rid of. But for now I stick with the gang and we head into the backroom.

In the backroom, Reba starts working some sort of witchy ritual involving dog hair and a cup full of the (selectively) burning snow. Innogen turns out to be surprisingly knowledgeable about faeries and arranges the corpse for a proper burial. Meanwhile I sense some serious tension between Miranda and Becca and run some interference before it blows up. Whatever Reba's doing looks like it takes a lot of concentration.

Innogen: It is suggested that we move to a coffee shop (of all places) for privacy. On the upside the guy behind the counter is pretty cute. It’s probably too much to ask that he’s not a werewolf or something at this point. I’ll have to look into that later. It seems that at least The girl with the dog obsession does know something about the ether. Between my knowledge of the rites and what she called ju ju we send the poor fairy off and Reba (the ju ju witch) finds out that the problem with the snow was cast by someone or something incredibly powerful. Seems I’m not out of Arcadia yet and have found myself surrounded yet again by magical allies of one sort or another.

End of this Story

🎲 DM: Due to life circumstances this storyline was not finished.