🐘 One-Tusk: Things are at a dangerous cusp. On one hand, we have an upstart, "free market" guild disrupting the glassblowers. On the other, we've got angry farmers withholding shipments. All of this is bad, and we're the noes who get sent in to troubleshoot. Which is likely going to involve finding trouble and shooting it.

Saving the Farmers from Themselves

🏹 Ehsan: The Arkstone military has a presence in Bear Creek, which is surprising to say the least. Their being here may be the cause of unrest. A military force where normally there isn't tends to lead to rising tensions, and what with crop yield being low and hunger high, any lower class will feel soldiers as a threat to their livelyhood (we learned as much back home a generation ago when even our farms were feeling a bit of famine).

We, or more like I, try to question out of the Lieutent General LaGard what exactly is going on here but he remained very annoyingly tight lipped. We may be checking this out as a favor to Rosalie but I find that their unwillingness to co-operate with what is effectively another branch of the Arkstone military rather...troubling to say the least. Branches have their secrets but I was under the impression that the Royal Pride acted as a force a bit above the common army and would listen to us, within reason of course. Our own Royal Guard back home was effectively a branch of the military, though small and very hard to test into. The structure of their divisions of the army must be different here. I will have to discuss with someone such as Rosalie about this to try and understand this better.

🐘 One-Tusk: I'm suspicious of LaGard- they're clearly up to something. The conventional military is worryingly anti-revolutionary, relative to something like the Pride. Of course, half of the senior officers fought on the other side during the Revolution- you can't just burn away all your experienced officers and expect to have a functioning military.

This ends up being mostly a dead end, but we find out that the farmers are planning an assault on a granary. This is going to end poorly for them.

🔫Alexis: Of course the families of the farmers did not want to give up their loved ones to us authorities but I was able to convince their wives and children that us finding them before they could cause any real trouble would be for the best. In return, I promised them that I would do all I could to ensure their safety. It was a very near thing that could have gone either way had I not been trusted and cooler heads not prevailed.

🐘 One-Tusk: It's a matter of "tell us where your idiot relatives went, so we can stop them from shoving their face in front of cannons and getting their obviously empty heads blown off." Which we do. I'm with Ehsan- Emmanuel should face a trial. I understand that keeping him here will at least ease tensions, but… it's a compromise I can't be entirely happy with.

🏹 Ehsan: After the near terror event at the farms at Bear Creek, we return back to the city without Emmanuel, much to my annoyance. He should be tried for his crimes as any criminal of his status would, but Alexis made a promise and I'm not about to compromise her rapport with the man. Maybe a light touch on this man's punishment will be for the better just this once, though I will see about having the soldiers posted there potentially keeping an eye on him and anyone he is to be dealing with.

Ildefons has some issues getting back through the gates due to his new tiger (though why this is an issue now when it wasn't at the ports I'm not quite sure). To kill a bit of time before heading back to the barracks, I decide to make a quick stop at that "seamstress's" guild we had visited some time back to make sure there wasn't too much damage due to our work with needing to capture that man a while back. Pleasantly enough the damage was either minimal or they worked very quickly to minimize the water damage as the shop looks (and sounds) to be functioning as normal.

What is surprising is Alexis is quite familiar with the owner. Now I'm not one to judge what those under (something) of my command do on their free time, but what with Alexis being an apparent frequent customer here I would hope there are not any attachments that can be held over her head or secrets that she may have spilled. I'm sure this establishment is professional but with it's placement in the city and their variety of clients I would be more surprised if they didn't work as spies. It may be a discussion for later.

🔫Alexis: Well that did not go quite as I expected. Upon returning to Lisway Ehsan wanted to check in on the status of the seamstress's guild. When I greeted the Madam by name and she greeted me in the friendliest reception I had yet to recieve. I would say who could blame me considering my future prospects but nothing is known of that yet and Morgan truly does have magical hands, the injuries I recieved in sparring and training would melt away under her ministrations. 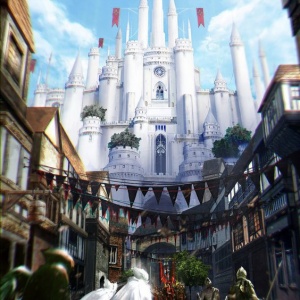