DM: Alexis had fell through a whole in the floor, separating her from the rest of the group in the previous session.

Senator Paradis and her Lost Son

DM: Ildefons, Ehsan, and OneTusk hear a gunshot and find Senator Isabeau Paradis, who "orders" them to find her son, Odilon, who has run off to rescue the artist doing a portrait for her.

🐘 One-Tusk: We follow the sounds of guns, assuming that it must be originating from one of the Pride.Instead, we find a jumped-up-would-be-aristo who could stand to be about a foot shorter. Sadly, that's not happening. She wants us to find her dissolute get, and after some… negotiation… we trot off with her safely ensconced in her little web. A great number of problems could be solved if she didn't escape.

DM: Alexis discovers Bukir and Magalie in the lower levels and guides them back to the rest of the group.

Getting Florint to the Sillage 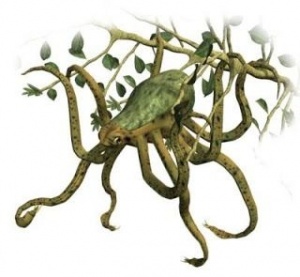 DM: Mandrot, along with two Hands of Liberty, are to escort Florint to the heart of Sillage so that he can close it.

🔥Mandrot: Florance is a talker but not very bright. I can't believe that they tried to make me carry the chest. I had to sweet talk some of the Hands of Fate... but we got a couple of those dim wits to carry Florance's tools for him. The wild fauna are really vicious. The room feels like home... hot and humid! Florance is looking to get us all killed with volatile stuff in his box.

In Search of Odilon

DM: Ildefons, Ehsan, OneTusk, Alexis, Bukir, and Magalie follow what is assumed to be Odilon's trail, instead finding Imogene, the young artist.

🐘 One-Tusk: Odilon is ostensibly protecting an artist. Not one of us was shocked to find the artist, unescorted, abandoned by Odilon. Who also could stand to be a foot shorter.

Odilon is Getting Drunk

🔥Mandrot: I heard some shattering coming from a room that was just at the limit of being overrun by the silage. I opened the door and who do a I see but the prick Odilon Paradis He's drunk off his ass. I convince him to either help us... or stay where he is after I try to provoke him some. he decided to stay... oh well, good riddance to bad rubbish.

DM: Everyone gets back together again, only to discover that Odilon has gone off on his own again. Ildefons, Bukir, Magalie, Imogene, and the two Hands of Liberty search for him. Everyone but the Hands escapes the building. Ildefons finds Odilon.

🐘 One-Tusk: Isabeau and Odilon survive, which is the largest tragedy to come out of the day's events. Odilon toddled off yet again, but STILL didn't become deceased. How many times may one lose their head without it becoming literal?

🔥Mandrot: Florint is almost useless. Fortunatly, he carries that walking bomb of a chest with him. He has anything any alchemist, chemist, or tinkerer would want in the case of a doomsday. This is the one chance I could prove my worth. I easily identified some of the chemicals needed based on my study of the fauna around here that could possibly close the sillage. That idiot Florint mixed in the incorrect amino acids causing the sillage to turn green. Purple is the correct color to indicate a the death of the sillage! Granted, he also had the ingredients for a nice concoction that allowed my inner pyro to work it's stuff. That was fun.