Joseph: Being the new hands in the yard, the VAT decides to assign our posse to a simple security gig. Our job is to make sure that misfortune doesn't strike the set of a motion picture called Waterland that happens to be filming south o' da city at a college. We're told that this job'll be easy, like bein' on vacation.

Lil' Joe takes charge o' the place as if all the cattle were gittin' loose and injuns are comin'. I think that boy needs to ease a tad and realize that we're just hired hands to wear uniforms and keep the people running the show happy.

Pauline: Thank goodness Sammy is old enough to manage the house alone for a few days. I spent a long morning at the Giant Eagle stocking up. We're off to W&J College for a few days to watch a movie shoot. It should be a simple job, but the boys are already making it far too complex- there was some stupidity involving a plane, and all I know is that Koz was late to the set.

In any case, it's a movie set. It's exactly what you'd expect. I mostly spend my time marshaling college students around and trying to catch Mr. Jeremy Irons' eye. What is it about that accent?

Amiri: There is no such thing as an easy job. The people upstairs have us working security for this production of something called Waterland. I have no idea why we are even doing something like this. It isn't really bettering anyone. It's just extra protection for those with lined pockets. I guess VAT needs to run itself with some income. Hopefully we get some more worthwhile jobs after this one.

They're After Me Lucky Charms

Joseph: Of course after a few days o' nothin', little things start to show up, magical things. I see sparks of essence hanging in the air and fading fast, indicatin' to myself that these lil' accidents are more 'in we reckon. I start to use the ole insight trick that I was taught when someone bumps into me, causing me to spill that effort. I'm pissed but that happens time and again.

Eventually we suss out that there be fae surroundin' the shack where Sinead Cusack keeps herself. This critters are a European variant o' the Veeho, or trickster spirits of the plains Injuns. Without using the magics that I did, I couldn't have caught on to what they were or what was goin' on.

Pauline: The whole time, of course, things are going wrong. Little things. Pranky things. That is, until the lighting rig nearly kills some extras. We start taking it a little bit more seriously, especially as we see tension building on the set.

Turns out that it's brownies or some such nonsense. Fairies, anyway, and the sort that don't leave and don't like company. Their mission is to ruin the shoot, even if they have to start killing people.

Amiri: This set seems to be stricken with bad luck. I have a wardrobe malufunction, Joseph spills the punch, and other nuisances bothered the rest of the group. We also noticed that everyone on the set were going through rapid and strong mood swings. Perhaps our presence is really needed here. Something supernatural may be going on.

Joseph eventually finds that there are a bunch of fairy folk hanging around Sinead's trailer. Evidently these fairy folk love mischief, so that explain a good bit of what has gone on. Koz takes some time to bug the trailer and records some voices in Gaelic. I had no idea what was going on, but it sounded like some harmless pranks that were an attempt to get the movie shut down. 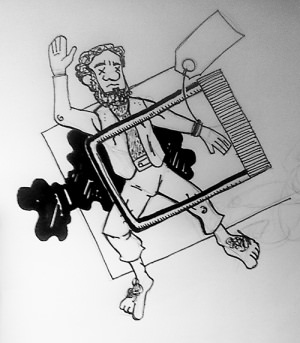 Joseph: With the Veeho being naturally unseen, we have no idea how to get their attention or make 'em leave. We try to talk with Sinead but she's bull-headed and refuses to acknowledge what we're askin' 'bout. Now this don't surprise me, as few folk are comfortable talking about these subjects, ifin their brains let 'em see it as it is.

So plan B is to put a stick to the hornet's nest. While Sinead is off acting, I draw out a large chalk circle around her shack and embue it with my will. The ward is just about as strong as I kin make it, and I figure that the critters will have a hard time crossing it. Sure, plenty'll be able to, but not all of 'em. We are a hopin' that this'll flush 'em out of hiding so that we can deal wit 'em.

I'm fer reckonin' that they'd come at us right quick but they dont'. Apparently these bastards are more devious. They kill one of their own and leave 'im in a mouse trap with a note that says "Sinead Cusack". Sick bastards. Maybe now we kin git Sinead to be a bit more forthcomin' wit what she knows.

Pauline: I'm mostly spending the time on lookout. I don't really have any particular skills in dealing with fae, and I spend a bunch of time wondering if rebar counts as cold steel, and if that even matters anyway. I really need to finish my forge and get started on a real sword.

When we find the dead fairy, I think that's really odd. I mean, why would they kill one of their own? Unless… it isn't their own…

Amiri: These fairies are labeled as the enemies in this case, so Joseph attempts to ward the trailer against them. I'm not so sure in this case, but seeing as how we are being questioned in our un-guardsman like actions, I decide to strap up and act as real security. This leaves me out of the action for the most part.

My diligence gets broken up by a screaming janitor. He says he found something weird in a rat trap. What was inisde looked like the lucky charms guy, but dead and smaller. I know Sophia is going to have a field day with this one. This gets me thinking, though, that my origional thoughts of them not being the main evil here could be correct.