Joseph: Fer this assignment, Constance herself is givin' us the lowdown. She confides in us that she was aimin' to git more outta the Hollywood fellas. She don't blame us, but I git the feelin' that we should try 'n not cut short a job again. She is fixin' fer givin' us our own stagecoach and wants to know what we'd like it to say. I'm fer tryin' to find a nice pun but the rest of 'em pay it no nevermind and start thinkin' up borin' stuff. A crying shame is what that is.

So our job is to ta escort a 18 wheeled wagon from the northern state of Mass directly back to the three rivers. We ask what the truck has and the question is evaded, but we are told that treasure hunters will be after it. Some things never change. However, some things are mighty new, as we get maps from a Triple A showin' us many routes to and fro. This is one of the thing that I'm likin' about my current situation.

Amiri: We all got some classes after that whole bank test. Mine weren't too bad, though Steve has been really busy with his. He keeps sneaking into my place and playing with my forks yelling, "What are you for!" This is really strange behavior.

The next job sounds right up Koz's alley. We are to drive and escourt a big rig from Springfield back to Pittsburgh. This will not be a cakewalk, though, as Constance informs us that people are after whatever it is we will be hauling. My guess is that whatever it is, it's some sort of magic.

Joseph: We arrive and find the wagon to be filled with rocks. Pauline has no idea what the rock is but I kin tell that it's from some kinda site or location, as some of the pieces looked to be worked by the hands of man. I commune with the area and find that the stone feels frustrated. I'm not able to suss out more, but as it isn't givin' me a headache, I'm fer assuming that it ain't no cursed rock.

In the mornin' we arrive at "zero dark" as my grandson calls it. I says that it's still the previous night until we git some o' that coffee. Once there I cast a ward and it is a big'un. I draw out all the energy that I can and give the truck the mother o' all wards. A creature o'da night would have to be very powerful to think about crossing that one. And man am I drained. I'm snappin' at the littlest thangs and just want to be left alone. I ride in the front of the coach with Koz and fortunately we sit in silence.

Amiri: Nope, not magic. Just some cruddy rocks. They look like a single piece that has been demolished, so perhaps when they are put back together it has some greater purpose. Since the drive up here took so long, we decided the best course of action would be to stop by a dive motel and spend a day of recovery and rest so that we will be ready for the long drive back.

While up here, we decided to see some sort of toy museum that really interested Pauline. I know she has a lot of kids back home, she she filled up a disposable camera with some pictures and bought some games for the little ones.

We set out as early as possible the next morning. The weather was still pretty awful and we know making good time was out of the question. We just had to hope that these bad conditions kept the other interested parties at bay.

Horses are on the Loose! Mennonite Roadblock! 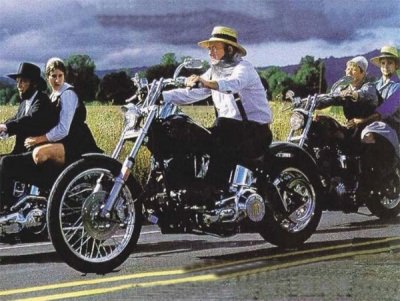 Joseph: A kindly sheriff pulls his coach up next to all of us and informs us that a bunch of horses were loose ahead and that we might should consider takin' the next exit. Koz is hellbound not to leave the road. By his reckoning, either way's a trap so we might as well stay on that road. As we ride up on the wild stallions we see that the road is blocked by cement fences. As it were stated, we reckon'd on a trap and made moves to clear up the horses and the fences. That's when we heard them motorcycles.

Ev'ryone thought it odd to see Mennonite folk on cycleback, but I didn't. I found their rides far more strange but I keep that to myself. Just as they git to us we've cleared the fences and start making our way. The world was a might foggy fer me, but I recollect clearly that one o' 'em fellas were throwin' around magics. Created a mess of ice on my grandson's automobile shield to obstruct his view. Fearin' that he might crash I get on the horn to ask if he wants me to fix it and I hear a yes. Mind you, that proves not to be true, but in da heat o' the moment it were. Focusing my thoughts I funnel my abilities and heave a chunk of rock with my will into the windshield and ice, bustin' 'em both apart like nothing. The fellas soon realize that our crew is capable and chooses the wiser course and stops pursuit.

I hear later that Pauline killed a man. That is a might sight awful for anyone, especially a woman. She's tough as nails and I'm sure dis'll serve to make her even tougher. Shame though.

Later, we cross into the commonwealth and pull through a weight station. We're passed by some kindly seeming Amish folk though we are more than a little suspicious. As we make to pass 'em they pull their wagon into the street and leap like their britches be burning. A moment later it explodes, nearly takin' out the African fella's jeep.

Amiri: The going was rougher than when we first came here. The snow was pretty heavy and there was a lot of wind.

While we were driving back, there was a police car with its lights on that we coming in on us fast. I was worried that we were in fact bringing something that was stolen and we would have to now deal with the police. This didn't appear to be the problem, though, as we were warned that a fence broke up ahead and that some horses were loose. They blocks off that part of the highway so we would have to take the upcoming exit. Since I was the tail car, we had to follow what everyone else did. It looks like they decided that the warning was of no consiquence and carried on.

The barriers were no lie. I got out of Bruce, my jeep, and got to pushing the Jersey barriers with a little help from my powers. After I got the first one out of the way we could hear motercycles in the distance. What is it with motercycles in the winter? Anyway, Joe decided to put his car to use and help me move the other barrier more quickly.

The motercyclist got to us before I could get to Bruce. They looked like some plain looking, scruffy people that I was later told were called Mennonites. They came at us with shotguns while their leader had some sort of weather and fire magic at his disposal. I was busy driving, so I had Pauline fend them off with my shotgun. I don't know if ti was intentional or not, but she got one right in the head. A nice shot for someone untrained!

Through some crafy driving we were able to fend them off without heavy losses. Steve broke his arm by giving on of them the finger and having is smashed by a errant cycle, I got some burn damage on my jeep, the truck only lost a single tire, and somehow Joe's car took the largest beating of them all. Every side appears to be bumped and he has no windshield.

We got stopped at a weigh station and Koz got a fine for being unagreeable about the spare tire. This was the least of our concerns as there were more of those mennonite people coming down the road. Pauline told me they could have also been Amish, but I don't know the difference.

As we pulled out, the carriage that the Mennonites had pulled in front of the truck and got smashed. Just as I was driving my the remains exploded, taking out the side door and catching Steve, whom switched to my vehicle, in the explosion. I'm now out a door and have a bleeding man-boy in my car. He won't stop crying. It is unsettling.

Joseph: We arrive at the museum with the load intact and us mostly together. Steve broke his arm with the bikers and Joe was mighty pissed about his automobile. We advise the museum about the attempts and we aid them in luggin' in the rocks. I don't mind workin' with the rock, as the physical nature 'o the work rekindles my connection with it.

Amiri: So many claim forms. I wonder if the other teams have such problems. We also appear to be the least funded, or at least we are not equipped for the things we are facing. The fact that only half the group owns a weapon is a big concern.

Pauline: I killed a man over a bunch of rocks. I… I'm not coming back to work until I know what was so damn important that this was worth killing over.

Meanwhile, back at the Mob Safehouse

Sophia: I got a call from my father. Or rather, from one of my father's guys. My father doesn't really call me directly. Not for things like this. I guess something went down yesterday, but it hasn't hit the news yet, and I don't like to ask questions. A couple of hitters got banged up pretty good. Nothing too bad with them: a couple of GSW to the extremities, no major arteries or organs were threatened. I don't mind fixing up those guys: they don't want to seem weak, so even if I have to dig a bit to get out the bullet fragments, they tend not to flinch or make distracting noises. No, the real the problem was the new kid they got who somehow managed to get his eye half ripped out. That was messy and he was whiny. I really don't want to know how that happened. He'll get an eye patch, and probably undeserved respect for being an idiot. At least my father was appeased.