Not really used, but ships had scale rankings of Armaments, Engineering/Power, Sick Bay/Life Support, Sensors/Science, Warp and Size (similar to approaches, but for ships. Size gives extra stress like Fate Core. These would apply as modifiers atop a character's approach result when using the ship (comparable to "scale" changes). 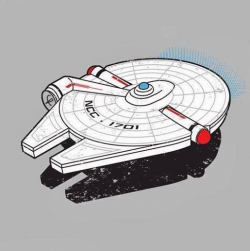 Ship: USS Huffman the Safest Ship in the Fleet (Shuttlecraft are the USS Henrysson and USS Wolfdale)

Just as we are celebrating the end of our fourth year of our five-year mission, we get an immediate call from Starfleet saying that small bursts of warp signatures have been detected in a nearby system that borders the Romulan neutral zone. We have to leave immediately, which leaves our captain stranded.

We arrive and discover that there are twin worlds, Asinox and Adustus, that both have intelligent life and one of them, Adustus, has developed warp. They are using it to shoot small coffin-sized vessels into space, aimed at Asinox ships to "help slow them down, we don't know how to stop them".

We negotiate a peace between the two peoples—represented by Cuddles and Las-sie—but sadly it is too late, as the Romulans have already struck a deal with the Hirinx to join the Star Empire. Fortunately, the Dolids have already signed on with the Federation.

Two Hirinx ships attack the USS Huffman but are defeated by the hard work of the ship's crew.

This was an unplanned twist.