Running through the Palace 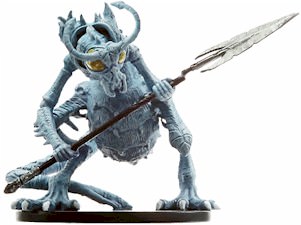 You've finally fought your way through the devil elves and you've just seen little Twinkle Harpell, possessed by Levistus, Lord of Stygia, strip King Talen of his Art. Diamond clutched tightly you bolt out of the room and into the palace hallways, running for your lives and the lives of everyone in Lone Rock City. A thump of new devils can be heard around the corner behind you. You look for just a moment and see a two tall bipedal white insect with clawed hands and feet, powerful mandibles, and a long thick tail covered in razor sharp spikes. Your only saving grace from the evil creatures are the poor unfortunate souls who don't join you in running as you turn the corners of the palace. As you near the exit of the palace you see an even more fearsome sight, an old Harpell lost in the palace.

As soon as you see that the elderly Harpell has a stone guardian nearby, you remember him to be Victor Harpell. He begins to engage you in dialogue, but the party's haste makes him look farther down the hall. Quickly casting, a wall of stone blocks the hallway. "Maybe now we can have a leisurely talk about what's going on?" The fearsome creatures however, teleported around the wall and moved to attack the group. Suddenly the party was surrounded by bearded devils waiving their glaives while Victor, and his golem named simply Rock, moved to fight the large white devils.

To the Watch Tower in the Residential District

As you reach the Watch tower in the residential district, the snow continues to fall lazily down covering the ground with fresh snow. Once inside the tower, the guard has you warm up a bit by the fireplace while he goes to get Layna and Ironhelm. Once you've warmed up, the guard returns and shows you into one of the meeting halls where Layna and Ironhelm wait for you.

In the meeting room Layna tells the party that there is a contingency plan for this and produces a scroll. Handing the scroll to the party she says, "Inside this is a map. After things have died down, follow the instructions inside. Do not show this to anyone, even the King."

Layna also produces two chests, one ornate with many runes on it, and another that is nothing more than a plain chest. Into the plain chest goes the diamond and Layna hands it to Ironhelm. She hands the ornate one to the party. Wolfdale sighs, "We're the decoys ... again."

As the meeting comes to a close, Ironhelm begins to change shape, alarming the party. Ironhelm explains as his appearance becomes that of a commoner. He is a doppleganger and Talen saved his life, and for that he agreed to serve Talen loyally under the term agreed on has ended in five years.

End of the Meeting

Wolfdale, ever vigilant, spied out of the window another large white devil charging straight for the watch tower, and as he cries out in warning it shatters the wall. Fast as lightning and just as deadly, Layna has her spiked chain in hand and tells Ironhelm to lead the party out as she lithely moves to engage.

Once outside the back door, the party sees that the way has been blocked by a wall of blubber and slime of small dretches and a white devil stands behind them. The party moves to engage and Ironhelm wishes the party the best of luck as he drinks a potion and turns invisible.

The white devil turns out to be a ruse of a kocracken, an illusion to distract the party while it withers the limbs of Ist'Vaech, rendering her useless until Robhim transforms her into a wolf. In true Harpell fashion, Ist'Vaech charges Nan'lhach, thinking him an enemy, though she quickly regains her full cognitive prowess and ceases the attack.

The party heads to Scarletstone to destroy Ottohop's research on the boxes of Orden. At the gates we were intercepted by two devils, one of which was ‘definetly’ a soul jarred Harpell. Shannon informed the party that Levistus has the boxes and most of the rings. Levistus was planning to establish an icy hell somewhere in the frozen north now that he was free.

Shannon Harpell then hides us in the sunny world of the cuckoo clock where we meet Delirium and Smokin Joe. The next day we sneak through the Harpell crypts and come upon a scene between Vincent Harpell and another Harpell. The party sees a staff marked “In case of ancestors” from which Ist’vaech runs screaming leaving the party to deal with the ghost of the Spellslayer.