LRC:Attack of the 50 foot Ooze

As the battle with Vincent Harpell continued, he strode out of the area of silence and began ranting about how the Lady of Mysteries (Mystra) had chosen him as her champion in stopping the world's spellcasters from using magic. "Magic is a tool that allows many to die too easily. How often do old magics cause the death or disfigurement of those around them? Mystra has grown tired of being used this way. It must be stopped!" Vincent spoke of a servant of Mystra who helped guide him, a being named Levistus who passed Mystra's holy word to his ear.

Robhim, having recently attended a talk by Yondbe on the Nine Hells, recalled the name Levistus as the ruler of Stygia, the fifth layer of hell. Presented with this information Vincent continued to fight, calling Robhim and the heroes liars.

After falling Vincent, everyone looked at each other asking, "Should we have taken him alive?"

Link to what the treasure is. Shannon was kind enough to use Spellcraft to attempt to identify the potions.

As you follow your own tracks back through the Dark Wood, you find that the trail is getting harder and harder to follow. It's as if the forest itself was obscuring your tracks from earlier. Hours pass as you make your way through the wood and soon you discover that you only a few hours from nightfall.

In the darkness, you hear a raspy voice call out, "You have gone the wrong direction..."

A single kobold strides forward out of the shadows of the Dark Wood, addressing the party sternly, "You are not permitted to go beyond the fiendish oak tree. This is your ONLY warning. The penalty for trespass is death."

Thus prompted, the party agreed to travel through the night to get to the Meadmaker Mines. The kobolds could be seen slipping through the trees, as well as the great panther Netsuo.

Arriving at the Meadmaker Mines, the party wasn't allowed any respite, after the dwarven guards at the entrance saw them carrying a dirty body with a hodgepodge of liberated loot in tow, under the careful observation of a glinty-eyed halfling. Although the party was exhausted, the guards didn't want them to enter the Mines, and sent them on their way. Robhim stopped the group for a short breather, while magically restoring their fatigued bodies.

In the early dawn of morning the party runs into Blue, who has come looking for them. He was concerned that something had happened to Robhim and the rest. Blue said he had been occasionally having exceptionally vivid dreams that would exhaust him and give him headaches.

As the party approached Scarletstone, there is a large stone statue of a warrior clad in banded mail with a bastard sword and it seems that the statue has seen rough times. It speaks to them and says "Greetings and welcome to Scarletstone, home of the Harpell family and my master Victor Harpell. Only Harpells and those with them may enter."

The party knocks on the door until finally a little girl by the name of Twinkle Harpell answers the door. She goes and gets Anonymous Harpell, who tells the party to pretend to be Harpells and the statue will let them in. Robhim enters as "Iseeyou Harpell"

The inside of Scarletstone is a flurry of activity, with many different casters of all varieties walking and flying down the hallways. In the back corner you can see that Peek-A-Boo has been placed in charge of caring for the families many familars as she is covered with cats, rats, and toads. She informs the party that most of the family is in the chapel, where Nyles is preparing mass.

After telling Nyles that Vincent was the leader of the Purists in the city and that he killed Smokin' Joe, Nyles agrees to cast Speak with Dead so that Vincent can be questioned. Nyles casts Raise Dead and brings Smokin' Joe back to life and he is "mighty grateful to y'all!".

Is it cold in here? 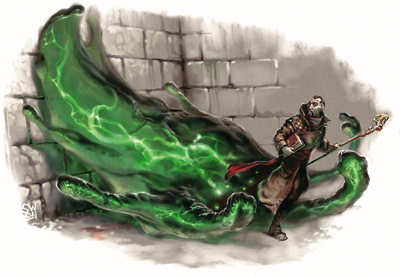 As the party and Nyles discusses what to do, everyone starts to see their breath as the temperature drops. The party goes out into the hallway and finds Shannon Harpell, dressed in a flamboyant swashbuckling shirt and tights, a rapier rests in it's sheath on his hip, and his face sports a wicked looking goatee. He informs everyone that they are now his prisoner as he uncorks an Iron Flask and releases an Arcane Ooze!

Everyone finds that their escape routes have been blocked by a glacier of ice around Scarletstone. Nyles tells the party that he and the other Harpells can get through the ice, but they have to distract the possessed Shannon and the Arcane Ooze. Unfortunately for the party, Shannon summons a huge Earth Elemental, but fortunately it was summoned by a Harpell and didn't behave correctly. During the heated battle Blue falls to the ground, pummelled to death by the Arcane Ooze. Brennel made use of a timely stolen Spider Climb to send the ooze on a wild goose chase, with limited success. Also, during the battle it seems that Levistus left Shannon's body to be grappled by Dmitrii. Dmitrii, unsure of Shannon's real identity maintained his grapple, and used his arcane prey to buy the Harpells some more time.

The aftermath of the battle left the foyer of Scarletstone in a state of disarray, moreso than normal, with 2 portals destroyed by the Earth Elemental, and a spiral of glittery goo trailing up and down the walls, and across the cieling and floors. The Harpell family, dear readers, will have wished their cousin Mr. Clean Harpell were in town today.

Once the Harpells were safely out of the house and the earth elemental disappeared, the Harpells were very pleased that only a few Harpells had died. Some of them even commented that besides lab accidents, it had been a while since someone had died in Scarletstone.

The party asks Nyles what it was that Levistus was looking for? Nyles tells the party that he will show them and then leads them down, down, down into the depths of Scarletstone. Passing through many magical wards and mundane locks, the party is lead to a room where Nyles asks them to wait. A half an hour later Nyles returns with Duncan, Ruha, Shad, Phil, and Jar Jar and everyone is goes into a room that has a large table with a chest in the center, rows and rows of reference books line the shelves, and a small lab is in the back of the room. Ruha then proceeds to tell the following story:

A few years ago we were working together on a small adventure when we accidently released Johnathan Nightbringer from his magical prison. He thanked us and allowed us to live and leave, so we did. We then found out that he was seeking the Boxes of Orden, which are powerful items that if used by Nightbringer, he could merge the realm of the living with the realm of the dead. We decided to stop him. As we found the first box, the Box of Nature, we discovered the Prophecy of Mondar.

Prophecy of Mondar involved the halfling ghost (Shad), the servant of wine (Phil), the slayer of the walking dead (Drusila, our now deceased undead slayer), the hidden flame (Ruha), the seeker of the albino (Duncan), the child of the garden (Jar Jar), and the bringer of tides (Ren Tidebringer). We've only been able to find bits and pieces of the prophecy, but from what we can tell whoever controls the Boxes will control the world.

Unfortunately by us finding the first Box, it put it into play, meaning that all the Boxes had to be found and used or the world will be destroyed. We've found all the Boxes, but unfortunately the Box of the Void has had it's markings removed so that it couldn't be used by Nightbringer. We don't know who did it or how.

Currently we are trying to figure out how to either properly use the boxes or how to destroy them, for they are prophecized to be great tools in the War between Good and Evil.