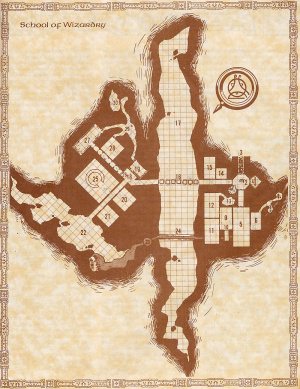 In-field Mission Debrief (Pt. 1) - Wes Temple Much to my... disdain, Meriae Harpell joined us in out raid of the Liberator complex that we were made aware of. Finding it was no hard task, though we did encounter some opposition. A trap made a group of Liberators aware of our presence, and we were met with heavy resistance. The devil elf that was fought at the Muir Hole was present, and was cut down. Luckily, with some arcane aid, we were able to somewhat turn an ogre to our side. He has taken on the "responsibility" of opening the doors in the complex.

I am intrigued, though, by a door that was barred from the outside to prevent access. If it is something that the Liberators fear, perhaps it may be an ally in the shadows. I plan on convincing my companions to investigate this area further.

I will finish this debriefing later as I feel breath on my neck, and it is most likely Meriae "discretely" observing me again.

After Vaeriasa betrayed the party by siding with the Deep Dragon, Wolfdale enacted the infamous rule three. Heaving his mindblade at Vaeriasa, it was blocked in midair by Wes. Reforming it with a thought Wolfdale heaved again and hit his mark, dropping Vaeriasa to the ground with a single hit.

Wolfdale also stood idle while Wes was successfully grappling the dragon, continuing to offer Vaeriasa as a tribute. He continued to offer Vaeriasa as the offering after the dragon declaired his disinterest in her and his desire to eat Wes. Wes thought that this was a pretty dick move. He especially thinks so now that the deep dragon is in the process of turning him into poo. Wolfdale also tried to break Vaeriasa's spine while she was unconscious. Double dick move.

Wes took the dragons ire so that Vaeriasa may live to raise her child. He also knew with Robhim's reputation, Guy (a family man) would have been on the menu as well. He knows that his son may be forever lost, and he wishes that no child ever be abondoned like what happened to his son. His only regret in doing so it that he may have doomed his son forever. He would go through any hardships and suffing for one more chance to help his son.