Lukas: I hear, from Brennel, that Brennel got a decent bit of info from Roscoe on contenders for the crown.

Brennel met us back at Stout's Inn after my dinner with Janus. Brennel brought up a potential employer, J.J. Wyeth, a man who is also vying for the crown.

Brennel: (to himself) J.J. Wyeth is definitely the way to go for now, at least. I'm sure a man of such opulence has a task or two that our party could handle. As long as the money is right, and it doesn't involve something that challenges our morals, the group would snatch that job up.

Robhim: Roscoe revealed to Brennel that the three major preteders to the throne are sir Talen (as we know), JJ Wyeth, a gemcutter millionaire favored by the underground, and of course his high-almighty General McInnis may be performing a coup if he doesn't like who is otherwise selected. Apparently the Liberators are still highly motivated and mobilized. JJ Wyeth may be looking for employees for his 'dirty work'.

I feel it would show us in a poor light if we were to work for all three parties struggling to fit into the throne. We really should choose one and stick with him. It'd show that we have some loyalty (a feature we're desperately lacking!). It might hurt our chances if someone else were to be crowned... but we could atone then. In the short term especially, it'd reduce the potential conflict of interests in jobs we might get. The only real positive sides to working for all three are that we surely get a job now, and that we'll probably get something when someone ascends. Our adaptability has already been proven.

The king's been taken, but the board is still full.
The knight, the bishop and the rook wish to fill his space.
Our pawn will move for all.
But what of the absent pawn?
She could become a queen.

Lukas: Everyone else went to the Sharper Edge, I went to Ovenate's and bought a hat. Ovenate is a little condescending, and a little creepy too. But then, so is Hanz.

I also bought a scroll of Sending so I could contact Althea, my Fiancee. (So maybe I should have done this a little sooner, I was distracted!!)

We all met up before lunch, toured the temple district and discussed future plans about Janus. We went through a lot of plans, most having the glaring flaw of someone in mortal peril. Simon was there and joined the conversation, "He is not bait.". After a good bit of discussion, we decided to take the information I had to Alicia. And at the same time I could head to the temple of Mystra in Scarlet Stone and ask about changing gods.

Robhim: After accompanying Brennel to Hans', we all went to Lauren Whistlemoon's leather shop (She's Captain Jack's friend he had me send a message to. She said he's doing better and just might pull through.) I asked her to check her catalogues and see what she might be able to pull together for me in non-metal heavy armors.

Brennel: Man, I need to get a nice stipend soon. I can't be blowing my gold away on clothing with my current income. Hans had a few frocks that I would have bought on impulse had my purse been a bit more heavy.

House of whips and swords.
Overseen by a queen wearing the armor of a king.
She hides more than gold beneath the skin of beasts.
She hides the scars of years in the company of soldiers.

The Temple of Mystra and the First Good News

Lukas:I really wish they'd get the doors of Scarlet Stone fixed. Shannon led us to the Temple of Mystra. I stayed at the Temple and gathered my thoughts, while waiting for Nyles, the head priest of Mystra. The others went to tell Alicia about what I'd found out/experienced.

Nyles was an apparently kind and artistic man with white feathered wings. I explained to him my situation and why I was at the Temple of Mystra. He told me that I had not the right attitude for service to Mystra and that he would not contact Mystra on my behalf. He did tell me that I should go to the temples of Azuth and Kelemvor, as they would be more likely to accept me as a worshipper. He also gave me a sketch that he had made of me while we were talking. Good artist.

After that was done, Alicia Mind Probed me for evidence. Again. And told us that my memories were enough to warrant a search of Janus' house. We also get to be in on the sting operation.

After that, evening, and time to rest.

Janus: he of two faces. Literally.
But she is of two as well, like a mirror of Tiresias.
Many masks avail this place, a silent war breeds false faces.
A sketch sometimes shows more truth than a portrait.
Don't cover your sins, better to let people see your fire. 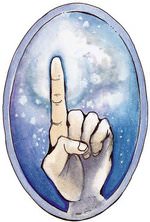 Lukas: In the morning, we all went our separate ways for part of the day. I went to the temple of Azuth. I met with the Head Priest Manasseh the Gifted and explained my situation to him. He agreed to contact Azuth about accepting me into the faith and communed with Azuth, asking more questions than just those few about me. Azuth chose to accept me into his faith!

I was atoned into the faith (I really wish I would have told him about the Mark of Justice.) and given a Book of Azuth & the notice that I would have to go on a quest for a powerful magic item for Azuth. I can live with that, it actually sounds like an adventure to me. I'll get some kind of sign about the item/quest, so I'll have to keep my eyes open.

Brennel: I do give Lukas credit for turning from his evil ways. I guess we'll have to make fun of him for another reason now. Magic items. Hmm...

Faith is more than convienence.
Don't mistake fortune for fate, or faith.
The price of faith is higher than he knows.
Silly boys, always looking for the holy fire.
A poem is more fire than an eldritch flame.

Lukas: As we all sat down to eat lunch, Lucan kinda stomped in in his Full Plate Armor. Turns out he's going on a secret quest and has acquired a halfling named Dete Gardener and an wild elven companion named Nan'lhach. Blue is going with them. Crud. I liked Blue. He was a voice of reason in the party.

Dookette, (Or was it Robhim. I think it was Dookette) Told Lucan that I had forsaken Velsharoon and pledged my patronage to Azuth. And the Fool pretty much told the whole room, by yelling that it whould be celebrated that I had forsaken Velsharoon, and thus Janus, about it. I only wanted it to stay secret for a night or two, that would have kept Janus from knowing that we were coming to get him. Dete and Blue, and an elf, I think a Wood elf, were also present.

Later that day, I sent a message via a sending to my fiancee, Althea, she's going to be coming to Lone Rock City!! What wonderful, joyous news!!

Message was: Althea, I'm sorry I didn't contact you earlier. I travelled to Lone Rock City. Hope to see you soon, My Love, I'll wait for you.

The Joker enters wearing the clothes of the Jack.
Courage is often a Joker's suite.
War stories are a way to hide the pain.
With no grave for his kin, the Joker goes to war.
But who does the naive fight for? His king?
The king is dead.
Long live the Jester.

The party, with the interest of collecting information from Vurbag on the Liberators, went to the famous abandoned house that never seems to be abandoned when they arrive. Facing a locked door, the party ran out of other options, and decided to stake out the house. Soon enough, Vurbag and 3 bodyguards(?) approached from the street. Vurbag immediately acted and ordered his friends to attack. Like a well-oiled machine, he put up an obscuring mist, which gave his henchmen a diversion to hide and stealthily surround the party. The party prevailed, and after finding the key to the brand new front door, they carried the bodies, unconcious and dead, into the house for subsequent stripping and looting.

Poon: I would just like to note that while the rest of you were f#$%'ing around I found Vurbag. That's how you earn gold.

Robhim, to Poon: We were making sure that we could buy off the under-paying General McInnis so he couldn't legitimately continue to make us do stuff for him for nothing.

Violence never solved anything.
Laughter is a better weapon.
Who doesn't laugh at the girl in black?
I'd laugh too if it wasn't so damn funny.

Poon: The loot from the bodies.