The wording of the Geas/Quest that Talen cast on Lukas, Robhim, Wolfdale, Brennel, Dookette, and Poon was:
You must refrain from discussing any of the details of your mission to obtain the Ring of the Waves, including my involvement, to anyone but Lukas, Robhim, Wolfdale, Brennel, Dookette, Poon, myself, and anyone else who I approve of, as well as attempt to stop the dissemination of this information by any means neccessary.

We gathered ourselves together and found ourselves on the list to be admitted to the palace grounds. Inside, Talen was quick to talk to us. Our mission, we found out, once we were all Geased, is to obtain and return to him the Ring of the Waves and, if possible, 100,000 GP from Sembia that was for mithral. The aquatic elves may have claimed these goods. There is a cavern to Lord Shashelas, the Deep Sea Lord. This cavern is near to the sea elven settlement of Elena'Talant. Lord Shashelas is also known as the Dolphin Prince. His clergy are known as Delphions (with dolphin animal companions). They are the mediators of the sea elven community, and intermediaries with outsiders. The Ring of the Waves is allegedly one of the "missing" rings of power. < someone > was charged by Mystra to collect and guard them. Talen gives us a rod of refuge (apparently keyed to his inner sanctum) to snap immediately upon acquiring the ring. Robhim has it.

Lukas: It's going to be a pain if Althea finds me outside of Lone Rock City. I don't lie keeping secrets from her. At least we've chosen a side. I'm still not sure if we've chosen the right side or not.

Dookette: He's an elf (DM: Talen is human), but he seems like a nice enough sort. I can't say that I'm happy about the Geas being cast on us, especially the wording, how am I to write poems about this now? Oh well, 2000 gold is a lot of inspiration.

Brennel: Man, I feel like I sold my soul. I'm hurting for gold, but I have the sneaking suspicion that we're not on the right side this time.

Breakfast with Evan Stormhandle and traveling

Evan Stormhandle is the very same guy who was with Talen when he came to our rescue after the drow incident. His ship's name is Pearl of the Ocean, with first mate Pigface.

During the ship's voyage to Elena'Talant, the party was treated to a reasonably restful voyage. During various points of cargo loading, the party was asked to remain in their quarters, as questionable goods (we believe) were place onto or taken off the ship. Brennel attempts to sneak into the cargo hold on a couple occasions, only to find that it is guarded at all times by a few half-orcs, even during crisis.

Wolfdale, in an attempt to prevent any altercations between the party and crew, asked Brennel not to go snooping around. Not soon after, he found himself in an argument with a crew member which was escalated to violence.

Robhim befriended a shark, through the use of his new pork lure.

Lukas: Tasty breakfast. Doesn't seem like a bad guy either. Odd that his crew is all half-orcs. The Orcs gave Poon the evil eye and Wolfdale managed to get into a fistfight. Figures he gets into trouble after giving us a "keep your noses clean" speech. Oh, and Robhim got a shark as a new friend.

Lukas: Elena Talant is an interesting community. The sea elves seem like they would be more tolerable if they weren't so stuck up. It's good that Cap'n Evan had a bargaining chip to use.

Dookette: Such well spoken orcs. Just goes to show that you can't judge someone by their race. Now if only there were some women. It isn't as though a woman would be incapable of hoisting a sail.

Brennel: I'm anxious to see what it is they are carrying on this ship. Their withholding of information from us is very familiar and hints for me to distrust them. Who knows, maybe I'll find a moment to myself where I can snoop in the hold when it isn't attended.

Lukas: Well, this combat was uneventful for me. Wolfdale took the brunt of the damage and the shark did much of the work. We're goin to have to talk to Wolfdale about staying close to the cleric when he gets hurt.

Dookette: These elves seem a bit bloodthirsty for my taste, but I can't have helped with the whole war drums business, I don't know what inspired me to play those things, the muse is a strange lass.

Brennel: I'm not all that quick to begin with, but underwater, I need to concentrate pretty hard to make any progress at all. And let's not forget the wear that salt water has on seams. I swear, as soon as I get out of the sea, I'm going to burn that rustic outfit. I was able to adapt my fighting style pretty well to our submaritime surroundings. My fellow party members don't understand the importance of adapting to their surroundings, which includes putting your best foot forward, and dressing for the weather. 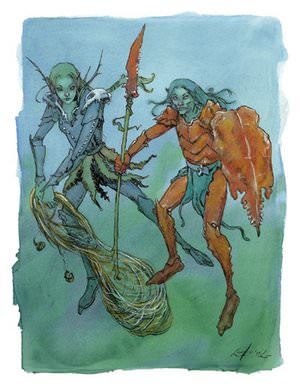 Lukas: First, we got treated like shit, now we're welcomed as honered guests. At least I got a necklace out of it. That'll make a good gift. Strange how fast the sea elves change their mind about people. Must be a racial thing. They seem like pretty decent people now. Though still a little stuck up.

Poon: If you ever came to Tangled Trees with a caravan full of half-orcs and humans, I can tell you that your reception wouldn't be very warm there either. I think that helping them fight their hated enemy won us some respect with them. I can't believe that they let us have the chest. Does anyone know if we can get these Geas spells off of us?

Dookette: I like my new turtle necklace, it's lovely, but not disgustingly tied to the trappings of conformist femininity. And they're elves, it's inevitable they're stuck up.

Lukas: While anyone would be tempted by that much gold, there isn't much we can do about the geas. Talen seemed to believe that there were very few people who could remove the geas. That's if I'm correct in judging Talen's "Good luck with that" comment when he brought it up.

I don't really care about the gold right now. There are other things more important to me and more immediate. I'm just hoping we find an air pocket inside that cave, because I want to be able to use all of my scrolls.

Brennel: I can't believe you guys would pass up an opportunity like this! A handcrafted tribal ensemble is perfect for our adventures under the sea! I need to stop by that creepy leather store back in Lone Rock City to check on what she offers in sharkskin. This stuff works great in aquatic environments, but I can't see it demonstrating the same level of hardiness against the harsh sunlight.

At the wreckage of the Selune's Light

Lukas: CRAP, Cap'n Stormhandle has gone from not that bad to suspected evil. He might believe that the sea elves are evil, and I'm sure that he's sure of that, but there were more circumspect methods of getting to the Cavern than killing our escort. And he used Harm to do it. And now we have a mission to do with a person I really don't trust anymore.

Dookette: Gah I can't believe it. Does every elf have to betray us? I mean fine, even if they do have a dark side we had no right to murder them like that. I hope my attempts at diplomacy helped that one elf, but I can't help but fear that he might be drowning, perhaps I can go and try to give him some aid.

Lukas: Yeah, we do have to make sure he's not going to die slowly instead of just being run through. Hasn't Stormhandle heard of subtlety? Oh, I don't think that the sea elves would view it as betrayal, as they weren't really on our side in the first place. I think they viewed it as protecting their Holy Ground from the infidels. And it seems to me that Stormhandle was the one doing the betraying.

Brennel: Can we meet a powerful priest that is genuinely pleasant to be around? I think Yondbe is the only person that fits that description, and probably only because he's too old to move or talk that much. What Stormhandle did is wrong, but I'm in no position to anger him, since he's the reason why I'm able to walk around down here with lungs full of air.