Herman:Just to make sure everyone posts, I'm not going to add much more than the outline.

On The Road to Tangled Trees 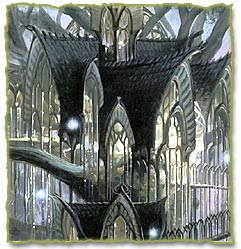 In a particularly dense part of the forest, we were following a trail followed by things bigger than deer. They turned out to be owlbears. A mated pair of hungry, pissed off, owlbears. We spent time lingingering about and playing with pissed off orphaned owlbear cubs, wherever they came from, while Poon dressed and preserved the meat.

Lukas: I really didn't expect such an easy battle against owlbears. (I didn't think I could do that much damage.) And few would expect that Brennel would take one down. He must've hit a kidney.

Robhim: Are you sure it was a kidney? I distinctly remember seeing all four kidneys salted and go into Poon's mouth.

Brennel: Few would expect that I would take one down? What's that supposed to mean? We don't all suck the cold, dead teat of Velsharoon for our abilities.

Lukas: Now now, at least I'm not compensating for sucking a teat that has to steal it's abilities from others, rather than using a power or developing your own. And stop touching me at night. It's bad enough I might wake up with Delirium hugging me, I don't need to worry about why I have halfling handprints all over my side.

Meeting Nev Aldeon on a trail, the party discovered that Poon has had some dealings with Tangled Trees. It was rumored that Poon stole goods from the town, but there wasn't any convincing proof to nail him on it. Nev mentioned that he was given advice to steer clear of the town, although Poon was never officially banished. Nev guided the party the rest of the way to Tangled Trees.

Alyssa was headed to "George's Pass" seeking the Elin of Nomin. (DM's note: The party was told what this was, but it was never recorded on the wiki.) An oracle, right?

Delerium's note: "Layna, Our business requires you to contact me by magical means. Urgently yours, Delerium Harpell"

Delerium: So I wrote a message and sent it to Layna, who I thought was an Elf, but wasn't and so had no clue about the group being ordered to go to Tangled Trees. I did remember that Phil was an Elf and that he was there when we were ordered to go to Tangled Tree. So Layna got him and of course he denied knowing what I was talking about and we got order to go on a death mission.

Lukas: "I hate Suggestion. I hate Drow. Next time, I will have my see invisibility UP and I WILL hurt them. Permanently, if I can help it. I'll also not rely on Tasha's Hideous Laughter again, unless it affects more than one person. (DM's note: Throwing a spell with a Will save against a class that has a strong Will save, i.e. Cleric, is not usually successful.)

Daryl: Yeah, and I likewise should have checked Gust of Wind to see it was a Fort save before using it on a cleric."

Have been sent to Tangled Tree by a faction in the court to bring the king's daughter back to Lone rock City to take the crown. She is assumed dead and ordered by Layna to return to face Drow to retrieve the possible body or living daughter of the king. Being slaughtered now. Send help now!!

Will the party continue to attempt to discover Alyssa's fate or go to Lone Rock City?

Robhim: "I'm with Delerium. Let's leave fetching Alyssa from the drow to others more capable of handling the affair -- Phil & Co will have to put down their drink for a few days but they can handle it. It's not worth risking my life. Talen seemed to be a fair person and would be respectful of my guild. Alyssa or no, he's a power that will be in LRC and I don't want to piss him off. Mission failed. Where there three drow yesterday, there will be three dozen tomorrow."

Lukas: I think a better prepared expedition is in order. Some scrolls of "Protection From Evil" would help. Getting a better strategy than "If it moves, hit it till it stops" would help. Y'know, planning ahead kinda stuff. That and next time, I'll make sure to have my "See Invisible" invocation up and working. I really think that we should keep going, it's not worth giving up yet. And the drow undoubtedly have worthwhile items to aquire. Items that would help us against them in the future.

I'm sure that Alyssa is either alive or there is at least a body. And maybe I'm wrong but I don't think the drow we met were all that much stronger than us, just better prepared. I also don't want to go back to LRC yet, because that has. . . ramifications beyond my position in the watch.

You guys do remember that we can ask Layna, or whoever has a linked diary, if we should keep going or if it's okay to go back.

So we're going on a recruitment drive then heading back into the woods? And me nearly broke.

Poon: But if we don't go after Alyssa, I'll never get reimbursed for the healing I did. Wait, uh, I did DO the damage in the first place didn't I...

Brennel: As much as I'd like the fame of being responsible for the return of the Heir, I know I won't be remembered by dying in the woods. At the same time, I'm scared to return to LRC, being associated with people working to maintain the royal line. Now that the Talenites are clued in to this happening, it's only a matter of time before they use magical means to come here.

Delerium: I say we head for home. Although I am sure if there's not a civil war going on now, there will be soon after we get back. I just don't see a good reason for us to stay. We're trapped in a political war and this is a nice clean way to do away with us all.

Robhim: Perhaps once we're back in Tangle Trees, we can inform the elves there that the drow are not killing but subduing to get us some assistance from them. At least a few redshirts. That would help to convince me onward.

Wolfdale: Once again the party and myself have choices to make go foward face these forsaken drow elfs or deal with the ongoing drama of the court. Both of choices hold a great deal risk. I say go forward I heard Hell is nice place

Brennel: I'm not sure what this Hell place is.