Robhim sent some messages via Animal Messenger and the Wayfarer's Union. He worked on guild stuff.

A response for the "kidnappers"

In the Wayfarer's Union message center, Doru (the son of the owner) bugged Robhim as usual, and revealed that he finally passed the Conjurer's Test to get into the Harpell Scool. Robhim's been visiting daily, looking for responses to letters that have been sent. There finally is a response: Regarding Maerae, we are given a key and direction. We are to deliver her to the Butterhouse Tavern's stables, where there will be another key that will unlock the drop box with our payment. It is signed "The Spellslayer".

Meanwhile... Those on watch are patrolling the middle class residental district, and encounter a group of people congregating and muttering things. Dmitrii parts a path through the crowd (nonviolently). Inside, in Phil's lawn, is a sprawled and catatonic Shannon, red with blood. Next to him is a dead Myrtle ("the Turtle"). The blood was not Shannon's but that of the must beloved and hugged after death Myrtle.

Shannon was accosted by a man from the shadows saying that he deserved "death for vile practice of the art". Nan'lhach, using tracking abilities, discovered that there were five people involved: two medium humanoids who did the attacking, and three who observed.

Shannon was led back to Scarletstone, along with Myrtle.

Some people tried to interrogate Phil (with whom Shannon was playing cards the previous night). This was a fruitless endeavor: Phil was too drunkenly passed out to have noticed anything, and his kitchen is a swampy mire of stale beer.

Gather information! Robhim spent time in the Halls gathering information about The Spellslayer. It was revealed that someone else is currently working on a case involving that information, and that we're not alloewd it. Our information will be passed on to that person and he will be in touch with us.

Robhim meets up with everyone else as they come to the Halls to file the report about Shannon. With dwarvish boobies, Dookette gets the name of the person on the case: Smokin' Joe Harpell.

We go to Scarletstone as a group to let the family in on Maerae's kidnapping. Anonymous Harpell told us that Peekaboo, the preferred confidante, was missing, so we chose to talk to Niles instead. He understood the situation and said he would pass on the information to those who need it. He would also warn the family that someone is out to get them.

Over dinner at Stout's, Smokin' Joe pulls up a seat and unloads on us. The Purists is a group around the Sea of Fallen Stars, particularly the north west, with goals of eliminating spellcasters. They formed during the potentially-magically-induced Shaking Plague {?}. Joe's (secret) reason for being in LRC is to find their leader, Spellslayer. He also reveals to us that, while most of their ranks are commoners and martial types, they do have some corrupted spellcasters they use against others.

At the Butterhouse Tavern, we rent a stable for the night out back. Our detailed plans all fall apart as it was a set up. The horse attacks Dmitrii, who falls it. There is no key on it, only a scroll of explosive runes. We meet up with Vincent Harpell at the tavern (before this actually). We all know he'll turn on us and he's creepy and involved, but our characters all fail their sense motives to his infinite bluff checks.
DM note: see here for discussion

There was a tall, powerfully built dark fellow with a club with runes on it that rented the stable. We see a raven about at one point.

After the uneventful time at the stable, we get word that there's been something going on at Scarletstone and that we should go there immediately. Nyles meets with us about it -- Smokin' Joe was delivered there overnight, dead. Nyles divines information to lead us to the perpetrators. We follow on it and head to the woods.

South of the Fiendish Oak Tree

Battle. Vincent Harpell turns on us as we expected. 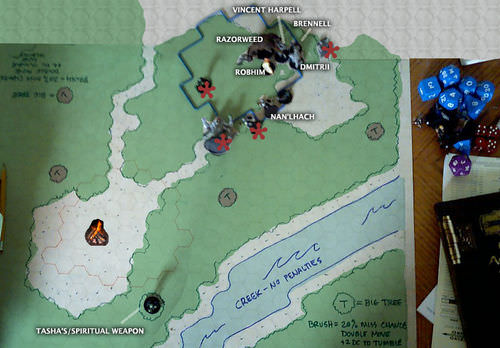 Picture of the battle in progress. (Photoshopped, obviously)