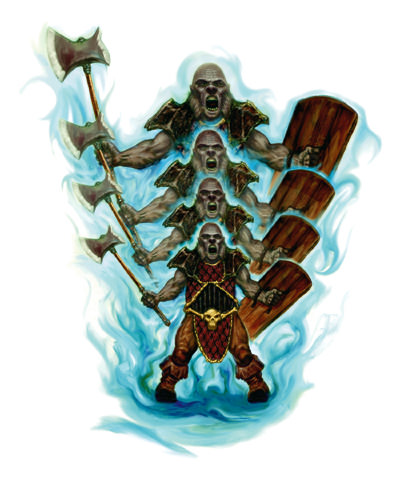 With the appearance of Drenzel, the devil elf who bested Jones in combat, and his duergar companions, all seems hopeless. Drenzel has demanded that you surrender your arms and become his prisoners. Reluctantly Jones asks that everyone comply, and you do so. The duergar collect your weapons and spell component pouches, forcibly searching everyone for hidden weapons. The duergar then tie everyone's hands together into a nice slave gang and lead you off. After traveling for nearly an hour, Drenzel touches the rope and a globe of darkness emanates from it, encasing everyone in pitch black. The deurgar lead on for another hour and a half, all the while you stumble in the black.

The next time that you see light is from a single candle in the makeshift cell you have been placed into. The room has carving of spiders along the walls, and it's design seems similar to the architecture that you saw in the rabbit hole. Your group is together in the small room, save Jones. His screams can be heard in the night.

You are put to hard labor by the duergar, helping to clear out the debris from the caved-in complex. By the amount of work that has been done, you would guess that the duergar have only recently begun to start their work. Besides Drenzel, you have seen no other devil elves, and you haven't even seen him since you arrived.

After about a week, a small hole to the surface is found by Peek-A-Boo. Quickly she has Nan'lhach take his pick and smash the chains on Jar Jar's feet. Jar Jar is scared to go alone, but Peek-A-Boo assures him that Chauntea will watch out for him. She says a blessing and he darts up the hole. At the same time the duergar notice this and move to intercept, and Quil-Fallener and Me'Rutha block their path. In a brief moment the two elves are dead on the ground the duergar smash the tunnel closed, collapsing it in on Jar Jar.

JarJar, Wolfdale, Brennell, Simon, and Meriae have been lead back to the area where Jar Jar thinks he was taken from. After some brief searching, tracks are found and Meriae leads the way to their friends.

After a couple of hours of traveling, Meriae comes back to the group and motions for them to be quiet. Ahead is a cavern entrance with a lone duergar guard standing watch inattentively. Meriae and Brennell move silently to the front of the treeline, still out of sight and begin sneaking up on the lone guard. As they break free of the treeline, so does Wolfdale, screaming and charging with his bastard sword-shaped soulknife above his head. Meraie sighs and rushes in with him. The battle is easily won, and no other duergar seemed to be alerted.

Once inside the cavern, Simon casts Darkvision on Brennell and himself so that they can guide the group. Sneaking through the tunnels of the complex, you hear the sound of work coming from a side tunnel and move to avoid it until you hear the voice of a duergar shouting "get back to work ye smelly elf!"

Brennell, Wolfdale, and Robhim carefully check out each door in hopes of finding storage rooms. Although we quickly find what appears to be a main hall we avoid it hoping to find our equipment first. Although we find another treasure room we avoid it and ready ourselves outside the main hall.

Charging through the halls we come upon two devil elves happily at their work—torturing Jones! Much of the room is covered by a large gazing pool which slows us down. Nan'lhach and Ist'Vaech take shots at the elves who darken the room throwing us into confusion. Brennell saws at Jones' restraints while the rest of the party deals with the enemy elves. After Jones is freed Brennell helps to double team the elves and the clang of the last elves maces is the last sound heard.

After the battle Jones slips into unconscious and he is carried out of the caverns and halls of the devil elves. When he awakens at our camp that night, mostly recovered from his wounds, he asks for his equipment back. As soon as his blades are in his hands he stabs Wolfdale and the party knocks Jones out again. Wolfdale and Nan'lhach defend Jones while the rest of the party tries to argue for his death. A middle ground is reached with keeping him unarmed and unconscious under constant guard while he is taken back to the Woodsmen.