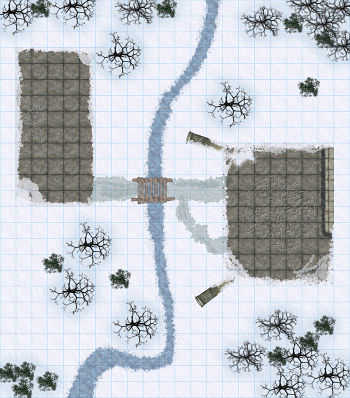 Ruins where the party fought a naga and it's goblin minions.

Left Scardale and tacked up the Ashaba River to the woods of Cormanthyr. After our first encampment we were located by Sister Samantha who teleported in with Sir Valens. Sir Valens is a right goodly paladin in service to the king. Talen ordered that he was to keep watch over us when we split from him in Tangletrees. He is to be Talen's eyes and ears while we are separated.

A few more nights of travels and our encampment was disrupted by fey who at first seemed to only want to dance and have fun. After spirited dancing by Wolfdale and Grim Graycastle and a general round of tag they asked us with help cleaning their healing spring. Seems the healing spring they watch over had picked up a taint of evil smell. We spent the night thinking on the problem before journeying up the feeder stream to find the source of the problem.

A tracking we won't go

Upstream we found the murdered, looted, and drowned corpses of a pair of elves. We gave funerial rites to them, consecrated the place in the name of good, and collected their possessions. We journeyed further upriver in hopes of finding the murderers only to be set upon by goblins, wargs, and a naga, oh my!

The goblins allowed us to charge through the snow on our magic snowshoes while harrying us with javelins. Deciding the goblins were no threat we tried to concentrate on the wargs and psionic naga. The brutally shivered naga dealt Wolfdale and Ist'vaech a stunning blow of telepathy. The party rushed forward to avenge this until Grim was speared through the neck by the mostly ignored goblins. Sir Valens dealt the goblins vengeance in two quick cleaves that drenched the bridge in blood. Rohbim and his ape harried the naga over the stream before finally knocking it out with a strike to the gizzard. Sir Valens put the naga out of everyone's misery while Grim was being attended in a delicate removal of the javelin in his neck.

Pixies just want to have fun, not Abendigo

After the battle and some healing, a small, feral creature exposed himself and started talking smack. After intent observation, Robhim and Wolfdale determined that the creature was Abendigo, of thinuan murdering infamy. He would not be talked down, so combat ensued. Robhim sat it out, but was not terribly unhappy about Abendigo's downfall. Abendigo had become quite tainted by evil, and it was he who had gone elf-murdering and healing spring poisoning. Funeral rites were given to all.

Arriving at Tangled Trees, we introduced ourselves formally to Tellellah and heralded for Talen's arrival. Talen went off on his own. We discovered that (former) General Harlann McInnis is in Tangled Trees planning a war against the drow; he had sought advice from the misspelled Elin of Nomin. We learned that the drow apparently did successfully evade Talen's men as they tried to rescue the princess.

Talen has been using Robhim's animal messengers to send messages to LRC. The second one, the one being sent from Tangled Trees, was intercepted -- but the sheet was blank. Many magical precautions were taken.

Circle dancing, and a little bit of trig by Simon helped us to learn of Yondbe's location. He's deep in drow territory. He said that the Elin of Nomin years ago told him that he would die bringing great good into the world. He decided he would make sure that good would be taking out a bunch of drow, which, he says, he has been doing rather successfully. There was much talking and story sharing.

Then, Robhim took him privately into the forest and talked about the thinuan rods and the story behind them. He was immediately intrigued, and decided that, before attempting resurrection from them, he would divine their contents. He learns that one contains Ren Tidebringer, and that the other is blocked from divinations (which probably means divine influence).

We decide to go ahead with the resurrections. First, we bring back Ren. He said he was happy surfing in the afterlife when a hot chick in a dark cloak (one of the six sisters perhaps?) came up to him and put him into the rod.

The next resurrection turned out to be none other than David DacAngelo. Immediately on seeing each other, Yondbé dies. His last words were, "Well met." Tears were abundant.